The Kansas soccer team is a perfect 3-0 after knocking off Alabama Birmingham Friday evening, 5-2.

Kansas' Monica Dolinsky, left, fights for the ball with an Alabama-Birmingham player Friday at the Jayhawk Soccer Complex. Dolinsky scored a goal in the Jayhawks' 5-2 victory. 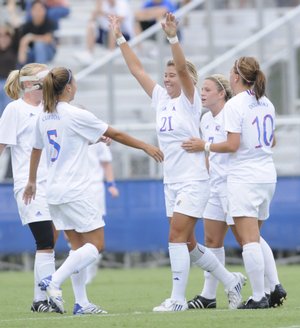 Junior Monica Dolinsky scored off a penalty kick for the Jayhawks in erasing a 1-0 deficit.

The Jayhawks improved to 3-0, their best start since winning six in a row to open the 2004 season. The Blazers fell to 0-4.

In the 19th minute, Cressy recorded her second game-winning goal in a row when she took a feed from Bush and blasted it past the keeper on the near corner. It gave the Jayhawks a 3-2 lead and ended a five-goal flurry for the first 19 minutes.

Cressy completed her first regular-season multi-goal match in the 51st minute with another shot off a long pass chipped over the defense. In just three matches, the freshman has four goals and an assist.

The five goals were the most scored by a KU team since 2004, when the Jayhawks defeated Texas Tech, 5-0.

The victory is Kansas' sixth straight at the Jayhawk Soccer Complex, dating back to the final three regular-season matches of last year.

KU will travel Sunday to SMU.