On Sunday, the now nationally ranked Kansas soccer team was trying to improve to 2-0 against Auburn. 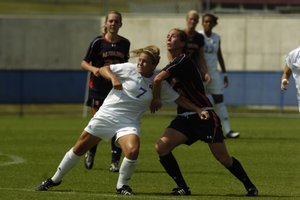 A hint of satisfaction pierced through Mark Francis' scathing words. Just don't hurt your eardrums trying to pick it up.

Kansas University's soccer coach first took a trip to Negativetown, lamenting his team's poor play Sunday afternoon at Jayhawk Soccer Complex against Auburn University. The Jayhawks didn't control the tempo, Francis said. They continually got beat to the ball. They allowed the Tigers to fire freely away on goal.

Through it all, though, Kansas somehow emerged victorious, 2-1, following a nine-day layoff.

So after scolding his Jayhawks, Francis finally mustered a compliment. Sort of.

"Last year, we would have found a way to lose that game," Francis said. "This season, we play a good team, we play like absolute horse crap, and we still win, 2-1. As a coach, you've got to say, 'Hey, you know what? We're doing something right. We're finding a way to win the game.' But I told the players, we have to demand more out of ourselves than what we did today."

Auburn out-shot Kansas, 17-8, and forced six corner kicks to KU's zero. But one statistic should make Francis and his team smile just a bit: 2-0. That's the Jayhawks' season record. The last time that happened, four years ago, KU eventually qualified for the NCAA Tournament.

"We're obviously excited we got the win, but disappointed with how we played," KU goalkeeper Julie Hanley said.

The game began well enough for Kansas, which came in ranked No. 25 in the Soccer America weekly poll. Midfielder Monica Dolinsky put the Jayhawks ahead just six minutes in. An Auburn giveaway deep in its own territory found Dolinsky, who unleashed a rocket into the lower-left corner of the goal from just outside the penalty box.

Little went right for the Jayhawks over the next 80 minutes.

Auburn (2-2) didn't allow Kansas past midfield for stretches. Forward Rebecca Howell then scored in the 51st minute, bending a ball from 20 yards out over Hanley into the upper-right corner of the net to level the match.

In the 84th minute, it appeared the Tigers would sneak out a victory when forward Caitlin King collected a ball off a Hanley save and booted it into goal.

"That was huge," Dolinsky said. "When they first scored, we kind of let down. Then, we saw the official call it back. We just knew we got lucky, so it was our turn to score."

But before that could happen, a heated exchange - one of many on the afternoon - occurred between Dolinsky and Auburn midfielder Chelsea Yauch in the 85th minute. Both received yellow cards and had to be separated. On the ensuing goal kick, Yauch threw an elbow and promptly received a second yellow card eight seconds later, forcing Auburn to go the rest of the game 10 players on 11. The card was one of seven that happened during the game.

"These girls just wanted to get into our heads at the end, but we didn't let them," KU forward Emily Cressy said.

Cressy made sure of that. Twenty seconds after going 11 on 10, KU's Lauren Jackson found Cressy with her back to the Auburn goal. Cressy whirled around and slipped the ball into the net for the game-winning goal.

The play brought a fist pump from Francis. And after the game, a real compliment.

"She's a goal-scorer," Francis said of Cressy. "I'm not sure anybody else on the team could have finished that as composed as she did. That was something we didn't have last year."

Congrats to the team. Getting beat on the field but scoring on your one or two opportunities is the sign of a good team with a bend, don't break attitude.