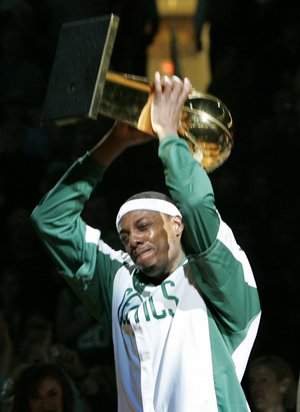 Boston's Paul Pierce shows off the NBA championship trophy prior to the Celtics' season-opening game. The Celtics were honored Tuesday night in Boston.

Boston — The championship banner rose to the rafters. The tears trickled down Paul Pierce's cheeks.

The MVP of last year's NBA finals finally was part of a ceremony that often seemed unreachable throughout his 10 seasons, all with the Boston Celtics.

But on Tuesday night, before their season opener against the Cleveland Cavaliers, the Celtics' 17th title banner and first since 1986 was hoisted high above the same court where Boston routed the Los Angeles Lakers, 131-92, barely four months ago in the clinching game.

John Havlicek, an eight-time champion with Boston, carried the golden Larry O'Brien trophy onto the court accompanied by other former Celtics and handed it to Pierce. They hugged, and Pierce cried.

"As a kid, I always dreamed of moments like this," Pierce told the crowd before the first quarter. "You never know if this day is ever going to come. I've had a dream come true to add another banner to the rafters."

The team's owners handed out championship rings to players before the green-and-white banner was raised with several players pulling on two ropes that lifted it to the ceiling. Some former Celtics were presented with rings between the first two quarters.

"One team, once a year gets to have a ring celebration," coach Doc Rivers said before the ceremony, "and we're that team because we earned it."

The Celtics beat Atlanta and Cleveland in tough seven-game series, then eliminated Detroit in six before facing the Lakers, the team they beat for their 15th title in 1984 but lost to in the 1985 and '87 finals.

James and his teammates were on the court for the national anthem but left before the ceremony.

"They were invited," Rivers said with a laugh. "I wouldn't want to be out there either. ... First of all, it's long. And, secondly, they're giving us something they want."

It was a bright night for Boston - fans' cameras flashing for nearly the entire 15-minute ceremony and gleaming rings made of 14-karat white gold with a total of 92 diamonds and emeralds. The top of the ring features an emerald shamrock surrounded by 64 diamonds.

Did Scot get a ring?