The Kansas soccer team took its first step toward earning a spot in this year's NCAA tournament. On Sunday, the Jayhawks knocked off Baylor 1-0.

The Kansas soccer team defeated Baylor on Sunday by a final score of 1-0. 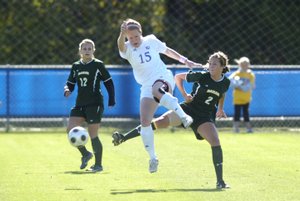 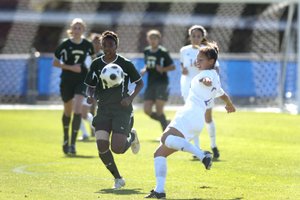 The senior class of Kansas University's soccer team is quite cognizant of the pangs the NCAA Tournament selection committee can bring.

Twice before, they've come tantalizingly close to qualifying for the postseason event, only to be denied an at-large bid on selection day.

This year, they'd like to make it much more difficult for the committee to leave them out of the final 64-team field.

Kansas defeated Baylor, 1-0, on Senior Day, the final home game of the regular season. With the victory, Kansas clinched a spot in the Big 12 tournament in San Antonio. At worst, the Jayhawks will earn the No. 7 seed and could play themselves into the conference's sixth seed.

The lone goal Sunday came off the foot of KU's leading scorer, junior Monica Dolinsky, in the eighth minute. With winds gusting in excess of 30 mph at her back, Dolinsky knuckled a free kick from 25 yards out into the upper-right corner of the netting past BU goalkeeper Gianna Quintana.

"It was a pretty straight shot," Dolinsky said, "but I knew the wind was behind my back, so that helped a lot."

At times, the wind kicked up so strongly that players couldn't even hear their coach's instructions from the sideline. And the wind's power played other tricks on the game as well.

With the wind in the first half, Kansas fired away from distance in hopes of sneaking another shot by Quintana.

The Jayhawks tallied 14 shots, with seven coming on goal in the opening 45 minutes.

When the teams switched ends for the second half, KU recorded just three shots, two of which were on goal.

Meanwhile, Baylor (5-11-2 overall, 1-7-1 in Big 12 play), a team floundering near the bottom of the conference standings, couldn't capitalize despite its second-half wind advantage.

The Bears recorded just one shot on goal all game, a header by Bethany Johnston in the 24th minute that bounced wide-left.

Sunday's victory pushed the Jayhawks' victory total to 11 this season (11-6-1, 4-4-1), but that certainly won't be enough to satisfy the NCAA selection committee.

Five members of the Jayhawks' six-player senior class (Jenny Murtaugh, Jessica Bush, Missy Geha, Sara Rogers and Kristin Graves) have been a part of two teams - in 2005 and 2006 - that won 11 games, lost a first-round Big 12 tournament game and did not receive an at-large bid to the NCAAs. KU's other senior, goalie Stephanie Baugh, transferred last year from West Virginia University.

"I've been dreaming about going to the NCAA Tournament," Geha said. "Today was kind of like a do-or-die situation."

Kansas has one regular-season game remaining, against Missouri (12-5, 6-3) on Friday in Columbia.

Should the Jayhawks lose that game, they'll likely need to win at least one game at the Big 12 tournament - something the senior class also never has accomplished.

"This year, they want it so bad," KU coach Mark Francis said. "I really hope, if for no other reason than for their sake, that we're able to get the job done and still be playing here in a couple of weeks."

Great wion for KU Soccer. Celebration for a 6-7th place finish in the Big XII. What is wrong with setting the bar low :-)!