The Kansas University soccer team was defeated by Texas by a final score of 1-0. 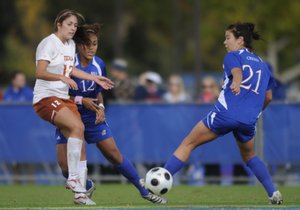 If there was a pot of gold, or any other kind of lucky charms located somewhere at the end of that rainbow, KU's soccer team sure could've used it at Jayhawk Soccer Complex.

Kansas lost, 1-0, against Texas on a cold, wet, windy day that only grew more glum as the Jayhawks' scoring opportunities dwindled in the second half.

KU fell behind in the 22nd minute when midfielder Kylie Doniak's pass down the right side of the field connected with Longhorns forward Kasey Moore just inside the penalty area. Moore then slid a shot across the goal mouth past Jayhawks goalkeeper Julie Hanley into the far netting for the game's only score.

"We knew (Moore) was dangerous," Kansas coach Mark Francis said. "We let her go one time, and she scored a goal."

Forward Shannon McCabe provided one of the Jayhawks' best scoring threats one minute later when she whirled and ripped a curving shot over Longhorns goalkeeper Dianna Pfenninger. But unlike KU's two previous games when McCabe scored first for the Jayhawks, her shot smacked the upper-right part of the crossbar and bounded away.

"I kind of thought it might go in, but it hit the crossbar," McCabe said. "That's just a chance you gotta take."

In the second half, neither team mustered much offensively. KU's lone opportunity came in the 50th minute when forward Emily Cressy wiggled loose in front of the Texas goal. Three quick stepover moves, a diving save and a missed follow-up shot by Monica Dolinsky ended the Jayhawks' final threat.

The game figured to be a low-scoring affair based on both teams' recent defensive successes, and neither squad disappointed in that department.

By game's end, that number stretched to 397 minutes, mostly because Texas refused to allow Kansas any decent looks on goal in the second half.

"As the second half continued on, we just panicked a little bit," KU midfielder Jessica Bush said. "Toward the end of the game, we panicked more and more, and that's when we lost our groove."

Kansas plays its final home game of the season on Sunday against Baylor.

There was one bright moment for the Jayhawks on an otherwise dismal day.

Bush was proposed to by her boyfriend at midfield following the game.

To bad the KU team could not duplicate the aTm game. May not make NCAAs noww.