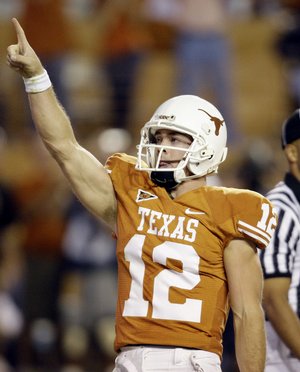 Austin, Texas — A week after earning Texas' first regular-season No. 1 ranking since 1984 by knocking off Oklahoma, Colt McCoy and the Longhorns used a stunning blend of dominating offense and defense in the first half to crush No. 11 Missouri, 56-31, Saturday night.

It wasn't close. Not even for a little while.

McCoy finished with 337 yards on 29-of-32 passing with two touchdowns, ran for two more and at one point completed a school-record 17 passes in a row.

College Station, Texas - Graham Harrell threw for three touchdowns and ran for two more to give Texas Tech its best start in 32 years.

Stillwater, Okla. - Playing its first game as a top-10 team since 1985, No. 8 Oklahoma State made quick work of Baylor, scoring on four straight first-half possessions.

Dez Bryant had a career-high 11 catches for 212 yards and two touchdowns and Keith Toston added two scoring runs as Oklahoma State (7-0, 3-0 Big 12) set up a showdown next Saturday at No. 1 Texas.

Ames, Iowa - Joe Ganz passed for 328 yards and a touchdown and Marlon Lucky ran for two more scores for Nebraska.

It was just the second victory for the Cornhuskers in their last 10 Big 12 games.

Boulder Colo. - Colorado found an answer to its quarterback troubles, turning to freshman Tyler Hansen, who sparked the Buffs to a victory.

Hansen, whose photo wasn't even included in Colorado's media guide and who was planning to redshirt this season, made a surprise appearance in the first quarter and energized the Buffs (4-3, 1-2 Big 12) while confusing the Wildcats (4-3, 1-2).