Return to the Sooner state 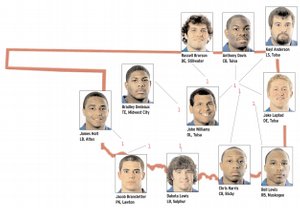 Complete video coverage of the Jayhawks' trip to Norman, Oklahoma to take on the Sooners in the 'Hawks' third conference game of the season

Friendship only stretches so far in Oklahoma.

In the case of Chris Harris, a Bixby, Okla., native and current cornerback for the Kansas University football team, the cut-off point is the turnstiles of Oklahoma's Memorial Stadium.

When Harris and the rest of his Oklahoma-born teammates travel to Norman on Saturday for Kansas' 2:30 p.m. matchup with the No. 4 Sooners, they're not exactly expecting a welcome-home party.

"They don't care if I've been friends with them for 12 years, they're still going to root for OU," said Harris of his friends from high school, many of whom attend Oklahoma. "That's just the way they are."

Similar sentiments should be plentiful Saturday, when a large collection of Oklahoma natives return to their home state for the Jayhawks' biggest game of the season. With the exception of Texas, the state of Oklahoma is where Kansas' coaches have gone most frequently to sign out-of-state recruits.

Of the 101 players listed on the Jayhawks' roster, 12 hail from the Sooner state, including six current starters.

On the one hand, this weekend's homecoming represents a welcome opportunity for home-grown players to return to a familiar setting while playing in a game with conference title implications (and beyond).

Said defensive end Jake Laptad, "I'm just looking forward to playing in front of my family, and a bunch of my high school friends go there, too, so it'll be fun."

On the other, it's a trip into stormy waters - many grew up attending Sooners games, so they can attest to the bee's nest awaiting the Kansas football team Saturday.

One of the nation's most notable college football venues, Oklahoma's Memorial Stadium has long been a state icon, a place where visiting teams are not warmly welcomed and devotion to the Sooner state's most recognizable team - professional or otherwise - is far-reaching.

"In Kansas, everybody is either a K-State or a Kansas fan," Harris said. "In Oklahoma, I don't care if you go to Oklahoma State, you're still an OU fan. People just go to Oklahoma State because sometimes it's a cheaper school or something like that. But they're OU fans."

Saturday's game will also offer a chance at redemption for a handful of the team's players passed over by the Sooners before landing at Kansas.

"Playing them will bring up the intensity level a bit for me," said senior linebacker James Holt, an Altus, Okla., native whose father played for the Sooners. "But I'm going to go out there and play my same game and hopefully show them what they missed out on."

If there's one member of the Jayhawks' program that doesn't need to worry about proving himself or enduring a wave of boos, it's the guy coaching the team.

When you happen to be a part of a national championship season, like Kansas coach Mark Mangino was as a member of the Sooners' staff from 1999-2001, you apparently get a free pass.

"It's kind of funny, when I was there last time we went there, the fans were outside the game, and they're telling me 'Welcome home,'" said Mangino, who is 0-2 against the Sooners as a head coach. "And I guess it goes back to ... if you win a national championship there, they declare you a resident of Oklahoma forever."

Asked whether that would change if his Jayhawks were to pull off their first victory over the Sooners since 1997, Mangino chuckled.

"It'll change a little bit," he said. "But that's all right. I'm willing to take that risk."

Yeah, I'm not with Harris on this - every OSU fan I know dislikes OU. Its very similar to the KU vs KSU thing.

I definitely don't agree with Harris on this! I live in Stillwater and I have never rooted for OU a day in my life. Granted, I don't like OSU either, but everyone is not an OU fan in Oklahoma. Make a trip to Stillwater and you'll know exactly what I mean.

a manager in the plant I work in is an OSU alumnus but he roots for OU. He said even when he was a student at OSU and OSU and OU would play their bedlam game he always found it hard to root against OU. He was raised and trained to be an OU football fan. I know that there are people who grew up closer to stillwater and would certainly disagree with Mr. Harris' assessment, but to an extent it seems he might be correct.

I hope Harris, Laptad and Holt are totally fired up for this game and it spreads to the rest of the defense. We need tight coverage, a pass rush and solid tackling. If the defense brings it we can win.

The majority of K-State fans I know would never root for KU under any circumstances. In fact, it is a culture of learned hatred for KU when attending school there.

In Oklahoma, OU is very similar to KU in that they have a state rival plus a border rival. In KU's case we have a much more intense rivalry with Mizzou than KSU, but in Oklahoma there is hatred toward Texas AND OSU. OSU feels like OU's little brother and the same can be said for KSU. I agree that the KSU hates us more than we hate them, but I still hope they lose every game.

I do know a couple of OSU students who root for OU, even during the OU vs OSU game. I'm sure it's not as widespread as that comment made it seem, but I can see there being some basis for his comment.

"In fact, it is a culture of learned hatred for KU when attending school there"see: inferiority complex :)

K-State claims us as their rival, but we don't have any of that because ours is Missouri. Then K-State tries to claim Nebraska as theirs, but Nebraska's is Colorado. Us and K-State have a rivalry, but its not our main rival. So how bad is Mark May going to pick against us this week?

I know a few OSU fans that would rather take a needle in the eye than root for OU.You've got great friends Rivethead, because I don't know a single KState fan that wants us to win anything. I'm perfectly ok with that, they don't like us, we don't like them, it's all good. Have a beer afterwards, life is good.

here is the funny thing about K-State fans. They hate us way more than we hate them. But hey, it comes with success academically and athletically. We become targets of the rivals. But thats ok. We have the Orange Bowl and National Championship Trophies, then we took K-State's pride away from them by winning the Debate national championship to boot. We are constantly attacked in the KC Star and other papers in the area by Mizzou and K-State fans. You know why? We are the most successful of the 3.

JHawk74....that was exactly my thought as well. Chris Harris please shut your bleepin mouth.Machawk: I don't think it's hatred. I have many KSU friends who root for KU when they're not facing KSU. If you want hatred look east.

Mizzou fans couldn't find hit water if they fell out of a boat, let alone find a good school.

I've always thought of K-State as more like a little sister.

"The KU/K-State rivalry is equal to the UT/Texas A&M rivalry. Sure, it's a rivalry and it's in-state, but we all know our venom is directed toward Mizzou, just like UT directs their's at OU.I root for K-State when they play anyone other than us."First of all OU is the one who makes the huge deal out of the OU/TX rivalry. A&M and UT is a lot bigger game and would be bigger than OU if A&M could field competitive teams.Second, you root for K-State? Do you root for Mizzou too? What is wrong with you?

MichAveJHawk: your prediction, though bold, is not impossible. KU as a program has really grown, psychologically speaking, over the last few years. So many big TV, big stage, competitive, packed stadium games have helped set us up for this one: MU, VT, USF. And beating OSU on road last year. And Texas A&m. And Colorado. This game is winnable. And we don't (necessarily) have to have OU make mistakes. With a good gameplan, the right intensity level, mixed with a few good risks -- we actually do control our destiny. Our margin for error is just smaller than OU's. But with their star ML out for the season, I like the thought of Reesing just picking that soft middle apart via Meier and mixing a few Jake Sharp runs and Fields post patterns in there.

That's nothing compared to what the Wichita paper had as a caption to an AP picture this morning. "Kansas coach Mark Mangino and his Jayhawks are used to being underdogs against Oklahoma. But the Jayhawks have won 17 of their last 19 games and have confidence they can pull an upset in Saturday's game in Norman, Okla." The article itself said nothing of the sort, but I about fell over when I read that caption. Here's hoping only the article is reprinted anywhere.

"In Kansas, everybody is either a K-State or a Kansas fan," Harris said. "In Oklahoma, I don't care if you go to Oklahoma State, you're still an OU fan. People just go to Oklahoma State because sometimes it's a cheaper school or something like that. But they're OU fans."Interesting statement from a Jayhawk player...but I think the same could be said for K-State students.

i don't know how you can root for ksu if your a jayhawk. i mean id cheer for a high school team to beat their teams....my hatred for them is that deep, and i like it

The KU/K-State rivalry is equal to the UT/Texas A&M rivalry. Sure, it's a rivalry and it's in-state, but we all know our venom is directed toward Mizzou, just like UT directs their's at OU.I root for K-State when they play anyone other than us.

OMG! Chris! You can't do that man. I know what you meant, but damn!

I am a Kansan having lived in Tulsa for 27 years, and I hate to say Mr. Harris does not what he is talking about. In Oklahoma, you bleed orange, or you bleed crimson and creme. Families are either all OSU, or all OU. OSU folks say they are pulling for the Cowboys and anyone playing OU. The OU fans lie and say they pull for OSU unless they are playing the sooners. Families are much more mixed in Kansas with blue and purple than you find down here. Mr. Harris should be very happy we don't play OSU this year because they would be all over his comment. His comment will probably still be used on Kansas next year. OU fans are laughing if they have read it.

Chris Harris showing an example of how doing drugs while pregnant can be harmful to the brain of the baby.....