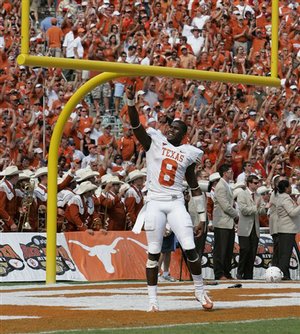 Dallas — The Texas Longhorns came into their annual showdown against the Oklahoma Sooners with a quarterback they could trust and a defense playing great under an aggressive new coordinator. Yet even after five solid victories, coach Mack Brown still wondered how good they were.

Trailing the No. 1 Sooners nearly all game, Colt McCoy and the No. 5 Longhorns grabbed control in the fourth quarter and refused to let go, pulling away for a 45-35 victory Saturday in one of the greatest games in the storied series between these Red River rivals.

Texas trailed by 11 twice in the first half and by eight in the third quarter before spoiling a fake punt and turning it into a go-ahead field goal. It was the first time all season the mighty Sooners were behind, and they answered by regaining the lead.

Then McCoy came right back with another go-ahead score - and his defense kept Oklahoma's Sam Bradford from finding an answer. When Chris Ogbonnaya turned a play seemingly headed nowhere into a 62-yard gain, the Longhorns were headed to their biggest victory since knocking off Southern California in the January 2006 Rose Bowl, much to the delight of their half of the record crowd of 92,182 at the Cotton Bowl.

"It was a game when every time somebody made a play, the other team would get more excited," Brown said. "It was one of the greatest football games I've ever seen."

McCoy's stewardship was terrific, the kind that will be remembered by Heisman Trophy voters. His numbers were good, too: 28-of-35 for 277 yards with a touchdown and no turnovers; he was sacked four times, but turned 14 rushes into 31 yards.

"We were able to attack, able to throw the ball," he said. "That was awesome."

Where Texas (6-0, 2-0 Big 12) vaults in the poll doesn't matter because if the Longhorns survive their upcoming schedule they will probably make it to the top eventually. They'll play host to No. 3 Missouri on Saturday, then to No. 17 Oklahoma State, followed by a road game against No. 7 Texas Tech.

Of course, they'll go into that stretch with the confidence of knowing they're on the inside track to a Big 12 title and perhaps the national championship. All from a team that, Brown said, "everyone has questioned ... including me. I sat around and said, 'I don't know how good we are."'

History is on their side.

The last time Texas came out of this game undefeated was 2005, the season that ended with the Rose Bowl win and national title. And the last time the Longhorns knocked off the Sooners when they were No. 1 was 1963, the year Darrell Royal won his first national championship.

The '08 club lacks a star like Vince Young. It's just a bunch of guys like McCoy - tough, talented and eager to keep surprising folks who thought they weren't ready to win games like this, against a team like Oklahoma (5-1, 1-1). After all, they'd played only one team with a winning record.

"Right now, this team would be known for heart and character and toughness and playing together," Brown said. "There are not individuals on the team, not guys who talk about themselves. It's been about 'this team' from Day 1."

Bradford came in as the triggerman of an offense that seemingly scored at will. They were 5-for-5 in scoring on their game-opening drive and made it 6-for-6 Saturday, after Brown won the coin toss and surprisingly let Oklahoma have the ball first.

But new coordinator Will Muschamp's defense limited the Sooners to 48 yards rushing, which meant Bradford had to come through more than ever. He was still good (28-of-39 for 387 yards and five touchdowns), just not good enough to also overcome some breakdowns on defense and special teams.

"This is only one game and it's over now," Bradford said. "We can learn from our mistakes and refocus our efforts on the rest of our games from here on out. We still have a lot of football left to play."

Only two years ago, Oklahoma lost to Texas and still won the Big 12. And the Longhorns do have that troublesome schedule.

"It's not over by far," said OU receiver Manny Johnson, who caught three touchdowns.

The Sooners led 28-20 when McCoy marched the Longhorns for a TD that got them within a point. When Oklahoma's next drive stalled just shy of midfield, coach Bob Stoops called for a fake punt, only to see his punter get caught from behind, inches shy of a first down.

Texas got a field goal and was lucky to get that, as a third-down pass into the end zone was caught by Oklahoma's Lamont Robinson but popped out when he hit the ground.

The Sooners went ahead 35-30 with a touchdown on their next drive, benefiting from a running-into-the-punter penalty and converting a third-and-14. But Bradford was out of comebacks, and McCoy was just getting started.

He took Texas 74 yards on the next drive, overcoming a third-and-9 by finding Jordan Shipley free across the middle. The defense closed in at the 5 and he dove for the end zone but his knees landed inside the 1. Cody Johnson rumbled in from there for the lead. Texas went for 2 and Quan Cosby caught it after batting the ball over his head.

After the UT defense forced a three-and-out, the Longhorns went 80 yards for a lead-stretching touchdown, set up by Ogbonnaya's long run.

"We started getting off the field when we needed to and that's when the big plays started happening," said Texas defensive end Brian Orakpo, who had two sacks.

Shipley caught 11 passes for 112 yards and a touchdown, and had a 96-yard kickoff return for a touchdown in the first half. Cosby caught nine passes for 122 yards.

Bradford threw two interceptions, a meaningless one on the final play and another late in the second quarter that led to a Texas field goal. He also broke the major-college record for touchdowns as a freshman and sophomore. He's up to 59, breaking Rex Grossman's mark of 55, and has at least six games left.

Oklahoma middle linebacker Ryan Reynolds tore a ligament in his right knee early in the third quarter and is out for the season.