Sunday afternoon, the Kansas soccer team played host to 15th-ranked Colorado. The Jayhawks out-shot the nationally-ranked Buffaloes 18-9, but behind a few terrific saves from Kirstin Radlinski, Colorado proved to be too much. 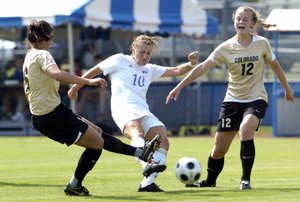 Radlinski stonewalled the Jayhawks with an array of acrobatic dips and dives for 90 minutes Sunday afternoon, as Colorado downed Kansas, 2-0, at Jayhawk Soccer Complex. In the process, she accomplished something no other goalie had managed to do in the Jayhawks' first 11 games - record a shutout.

"Their goalkeeper played unbelievable today," KU coach Mark Francis said. "I don't know if she's always that good, but if she is, I can't imagine there's a better goalkeeper in the conference. A couple of those saves she made in the first half were unreal."

Kansas entered the day with 26 goals in its first 11 contests this season - a number already surpassing last year's season mark. But Radlinski was not interested in allowing KU to add to those totals in game 12.

Public enemy No. 1 on Radlinski's list was KU junior midfielder Monica Dolinsky, who would've needed supernatural powers to guide the ball past CU's goalkeeper on Sunday.

Dolinsky's first opportunity to score turned out to be KU's best. In the 19th minute, Shannon McCabe flicked a ball to her in open space from outside the 18-yard penalty box. Dolinsky lasered a shot that appeared on its way into the net. But Radlinski dove backward, tipped the ball over goal with one outstretched hand and kept the shutout alive.

In the second half, Dolinsky saw more of the same resistance in goal. She bent a ball around the CU wall off a free kick that resulted in a diving save. And when Dolinsky finally sent a shot around Radlinski, it nicked the right post and bounded away.

"Their keeper had a great game," Dolinsky said. "She probably won the game for them. I had one that was almost in and another one that hit the bar, so just an unlucky day."

Kansas (8-4), which outplayed 15th-ranked Colorado in the first half, came unglued for a 10-minute stretch in the second half. It cost the Jayhawks the game.

In the 55th minute, CU forward Nikki Marshall placed a perfect pass through the back of KU's defense that goalkeeper Julie Hanley couldn't handle cleanly. Buffaloes forward Nikki Keller was the beneficiary and buried a shot into the net, putting CU ahead, 1-0.

"I think we lost our rhythm once they scored," McCabe said, "and we couldn't really get back into it the rest of the second half."

For the second consecutive game, Kansas outshot its opponent at home. This time, the Jayhawks' 18-9 advantage wasn't enough.

Despite the loss, Francis said he thought his team might have played its best game of the season against Colorado (9-2-2).

And Kansas can take solace in one more thing: at least Radlinski is a senior.