After a week off, the Jayhawks face Mizzou at Arrowhead Stadium.

Mangino unsure if KU will return to Arrowhead next year

KU head football coach Mark Mangino says the team will have to wait and see how Saturday's Border War turns out to determine if he wants the Jayhawks to play Mizzou at Arrowhead Stadium next season. 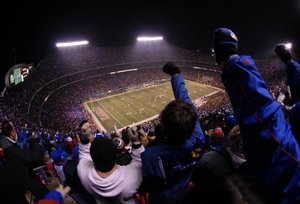 Fans cheer during Kansas University's game against Missouri on Nov. 24, 2007, at Arrowhead Stadium in Kansas City, Mo. Kansas and Missouri certainly did their part to close the gap in the Big 12, as the Jayhawks and Tigers played in the most high-profile conference football game of 2007.

It is a good testament to the intensity of a college football rivalry that the two schools involved cannot officially agree upon a series record.

Entering Saturday’s annual Border War matchup at Arrowhead Stadium in Kansas City, Mo., the football teams from Kansas and Missouri universities are faced with the following conundrum: Neither will admit it lost a game played 48 years ago.

Each school claims it won the 1960 game — which, common mathematics tells us, is an impossibility — and, therefore, each school gives itself a victory in the school record book.

From the media game notes handed out Tuesday by the Missouri athletic department: “MU leads (the series), 54-53-9.”

From the media game notes handed out Tuesday by the Kansas athletic department: “Kansas holds a narrow 54-53-9 advantage in the series.”

At its core, the controversy centers on a man named Bert Coan, a former Kansas halfback who arrived in Lawrence in 1960 amid rumors he’d been improperly coaxed into transferring from Texas Christian.

In the Jayhawks’ game against rival Missouri that season, Coan carried the ball nine times for 67 yards as Kansas won convincingly, 23-7, ending a previously undefeated season by the Tigers and helping ensure a Big Eight title for the Jayhawks.

A few weeks later, however, Coan’s eligibility was revisited during a meeting of conference representatives in Kansas City, Mo. There, it was determined in a vote that Coan’s participation in the game was illegal and that the Jayhawks consequently would be forced to forfeit their victory over Missouri as well as the Big Eight title, as the Tigers went on to finish the season 11-0 and won the Orange Bowl.

Missouri fans cheered, Kansas fans scowled, and all of that brings us to today, three days before the teams are set to match up for the 117th time — the nation’s second-oldest college football rivalry.

Kansas has not officially conceded the game. Neither has Missouri.

Some, like Kansas coach Mark Mangino, insist the record issue is a moot point.

That sentiment, however, places Mangino in the large minority of fans, players and coaches familiar with the 1960 situation. The conference ruling, along with the subsequent inability of either team to pull away in the series, has done little to extinguish the controversy surrounding a game that took place nearly half a century ago.

“I’ve talked to maybe four guys who played for Missouri in that game, and all of them — to a man — say, ‘We lost the game,’” said KU defensive coordinator Clint Bowen, who also played defensive back for the Jayhawks in the early ’90s. “They can say he was ineligible ... but when the ex-MU players that played in the game, that have the most to say about it, say, ‘Hey, we showed up and lost the game,’ then they lost the game.”

And all of that leaves both sides where?

Despite its controversial nature, the story of the disputed 1960 game has persevered long enough that it’s difficult to find a current Kansas player unaware of it.

“I’ve heard the story,” said KU quarterback Todd Reesing, who Saturday will be gunning for his first career victory over the Tigers. “But I don’t think that’s ever going to be settled.”

Speaking to reporters inside the Mrkonic Auditorium on the KU campus Tuesday, Mortensen laid out a simple — albeit fool-proof — plan that will put the problem to rest, once and for all.

“I say we should play for it this game, man,” Mortensen said, smiling. “This game’s worth two games.”

Don't we have a "win" from a few years back against OU because of a similar sanction against them? No media or fan will look back and say that we won that game because we got rocked when we showed up. Same situation with 1960. But the sad part is the official record should say we lost it if the governing body at the time determined that. The official record should be how the conference views it. That being said, the winning streak to reclaim the series starts on Saturday baby!

Granted, there was ruling by a governing body, but in my opinion, if two teams showed up and played a game of football, and one team scored more points than the other, that's a win in football.That should go for our record against MU as well as the OU game.I'll take a loss to OU and a win over MU if it means it's real.

Is there a pep rally this Friday night before the game??? It had better not be in a strip mall parking lot again. LAME, KU ALUMNI ASSOCIATION, LAME!!! Mizzou has their rally at the Power and Light District. We have ours in the Salty Iguana and Intrust Bank parking lot. Corporate tie-ins are one thing, but this is ridiculous. A parking lot? Isn't anyone else embarrased by this?I think the natural place to have it is the LEGENDS. Hell, have the rally right there by the water fountain. There are all kinds of bars and restaurants and the place is named after Legends from the State of Kansas! It just kinda' makes sense, you know? Let me hear you, KU fans.