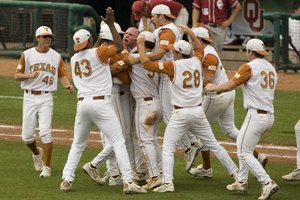 Texas players celebrate an 11-10 victory over Oklahoma in the Big 12 Conference baseball tournament on Saturday. Texas will play Kansas State in the championship game today in Oklahoma City.

Oklahoma City — David Hernandez singled in the winning run to cap a three-run ninth inning as Texas stunned Oklahoma 11-10 on Saturday to advance to the Big 12 Conference baseball championship game.

The fifth-seeded Longhorns will face seventh-seeded Kansas State in the title game. The Wildcats emerged from their pool after beating Baylor 3-2 late Saturday.

Jordan Danks and Kyle Russell walked and Brandon Belt had an RBI single to start the Longhorns' rally. Russell scored on a two-out wild pitch to tie the game, and Hernandez followed with his single off Chase Anderson (5-4).

Oklahoma (34-24-1) charged back from a 6-1 deficit by scoring six runs in the seventh inning, highlighted by Jarod Freeman's bases-loaded triple.

Texas (36-20) regained the lead on Travis Tucker's RBI single in the eighth before the Sooners scored three runs on a fielder's choice, a hit batsman and a bases-loaded walk to go up 10-8.

Keith Shinaberry (2-1) struck out J.T. Wise with the bases loaded to end Oklahoma's ninth-inning push. Tucker and Belt each drove in three runs for Texas.

Drew Biery and Byron Wiley each had an RBI single in the sixth inning as Kansas State (29-28) rallied to beat Baylor (32-26).

Biery's fourth-inning groundout off Baylor starter Kendal Volz (3-6) scored Nate Tenbrink and broke a scoreless tie, but the Bears went ahead 2-1 in the top of the sixth. Ben Booker doubled to right field and scored on a single by Shaver Hansen. Hansen later scored on a sacrifice fly by Dustin Dickerson.

Tenbrink and Justin Bloxom opened the bottom of the sixth with singles for Kansas State before Biery and Wiley delivered their run-scoring hits. Baylor left the bases loaded in the seventh inning.

Kansas State starter Justin Murray (2-2) allowed seven hits and two runs in six innings, while Daniel Edwards struck out three in 12â3 innings of relief for his 12th save.

Big 12 player of the year Jose Duran hit a 3-run homer as Texas A&M (43-16) snapped an eight-game losing streak and prevented Missouri (38-19) from advancing to the title game by beating the Tigers 6-2.

Kyle Colligan hit a solo home run in the third inning and Duran added a three-run shot to center in the fifth inning as the top-seeded Aggies built a 5-0 lead.

Greg Folgia and Steve Gray had solo home runs to provide the only scoring for Missouri.

Neil Medchill tripled and homered and Dean Green added a two-run homer for Oklahoma State (42-16), which had its hopes of reaching the title game ended when Kansas State beat Baylor.

Green's homer came during a four-run third-inning outburst for the Cowboys, and Medchill opened the fourth inning with the triple as Oklahoma State extended its lead to 7-1. All those runs came off Nebraska starter Thad Weber (8-4).

Nebraska (40-14-1) pulled within 8-5 in the sixth inning, but the Cowboys answered with three runs in the ninth, with Thomas Belza and Donnie Webb contributing run-scoring singles.

Medchill is the fourth Oklahoma State player to hit at least 10 home runs this season.