OSU too tough for Baylor 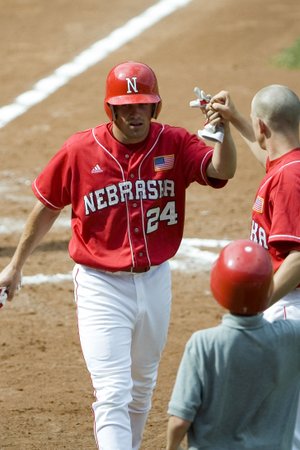 Tyler Farst's RBI single broke a 2-2 tie in the top of the fifth, then Opitz's two-run shot to left-center field gave the Cornhuskers (40-13-1) a couple of insurance runs in the seventh.

Opitz finished 3-for-3 for Nebraska, and Mitch Abeita and Farst each went 1-for-4 with one RBI apiece.

Kansas State (28-28) got its two runs on a fielding error by Nebraska third baseman Jake Mort in the bottom of the fourth inning.

Johnny Dorn (6-1) allowed seven hits and two runs and struck out three in 62â3 innings for the Cornhuskers. Zach Herr allowed one hit in 21â3 innings of relief for his fifth save of the season.

Rebel Ridling had six RBIs to help lead Oklahoma State to a victory in seven innings over Baylor.

The game was tied, 1-1, through the second inning, then the Cowboys (41-16) got a three-run homer from Matt Hague, a two-run home run from Ridling and an RBI from Donnie Webb in a six-run third inning. Oklahoma State added another run in the top of the fourth.

The Bears (32-25) answered in the bottom of the frame with RBIs from Paul Miles and Raynor Campbell to bring the score to 8-3, but Baylor wouldn't score again.

The Cowboys added another four runs off Ridling's grand slam in the top of the seventh before the game was halted.

Ridling finished 3-for-4, and Hague and Luis Flores had three RBIs for Oklahoma State. Campbell finished 1-for-4 and Miles went 2-for-3 for Baylor.

Andrew Oliver (7-2) allowed nine hits and all three runs in 61â3 innings for the win.

Craig Fritsch (3-4) suffered the loss, allowing 11 hits and eight runs in four innings for the Bears.