So, just what happened to 'Peace, Love and Daisy Hill Forever' this past fall, following the Nebraska football game against KU? See Pat Slabaugh, of Douglas County Bank, recount the crime and outline the fiberglass Jayhawk's painstaking rehabilitation.

A point of pride for a local bank is back on its public perch - in full, restored glory! 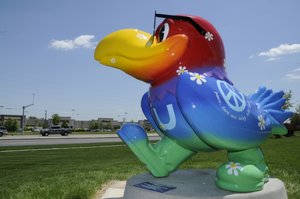 The "Peace, Love and Daisy Hill forever" Jayhawk by Susan Younger and Valerie Spicher has been repaired, repainted and is back to strutting its feathers in front of the Douglas County Bank at 31st and Iowa. The Jayhawk, which was placed at its new spot Tuesday, had suffered significant vandalism when perched at Sixth Street and Folks Road, and its paint had faded significantly. The new paint is auto paint.

A fiberglass Jayhawk is back in the fast lane, spiffed up by a high-end auto body shop to shine, sparkle and shimmer at a busy Lawrence intersection.

The Jayhawk - "Peace, Love and Daisy Hill Forever," from Jayhawks on Parade five years ago - is back resting on its concrete stand atop a base of stone tiles on the lawn out front of Douglas County Bank, at the southwestern corner of 31st and Iowa streets.

But the flight wasn't easy. The celebrity Jayhawk had been vandalized last fall, left for dead on a nearby street and held in storage at the bank's branch at Sixth Street and Folks Road.

For the past two months, professionals at an auto shop in Kansas City, Kan., sandblasted away its faded paint, then filled in hairline cracks, small holes and the missing soles of its green boots - the ones torn away when the mascot was stolen - with the same putty used to repair high-performance automobiles.

After spraying on the best paint that a sports car enthusiast could afford - the kind used to return Corvettes to their sleek, powerful grandeur - the Jayhawk was ready for a return to public view.

All that was left Tuesday was a truck ride, crane lift and tightening of nuts and bolts for installation, and the folks at the bank were pleased that their $3,000 investment in repairs already had paid off.

"It's a lot brighter," said Pat Slabaugh, the bank's executive vice president and chief operating officer. "We want everybody to come and check it out and enjoy it."

Jerry Elevier, owner of Auto Craft One Stop Auto Shop in Kansas City, Kan., now adds the fiberglass Jayhawk to the list of countless cars, trucks and other vehicles he's rehabilitated and restored.

He figures there could be more down the road.

"There's maybe 25 more still out there," he said. "If people are interested, give me a call. I'll restore them all."

Damage to "Peace, Love and Daisy Hill Forever" came following Kansas University's 76-39 pasting of Nebraska on Nov. 3 at Memorial Stadium. Somebody had yanked it off its base at Sixth Street and Folks Road, then left it for dead in Eldridge Street nearby.

Pat Slabaugh, of Douglas County Bank, took the call from police at 2 a.m. the next day, asking him to claim the body. He hopes the need for such a call never arises again.

"But if KU scores 76 against Nebraska again, I guess we'll just have to deal with it then," he said with a chuckle.

Another attack on another Jayhawk on Parade - this one "Gogh Hawks Gogh" - came after another football game, this one against Kansas State.

The fiberglass statue was taken from its perch in northwest Lawrence, and its head later was discovered in the woods near Gateway Apartments.

On Monday, police were notified where to find the body: in the trash at Sunrise Village Apartments.

Keep it up you classy cats and huskers.Nothing is more gratifying to me than seeing our rivals so distraught by losing that they resort to the attempted murder of an inanimate object.