KU catcher Buck Afenir, left, is unable to pull in a throw to home in time to tag out a K-State runner.

The Kansas baseball team still had the ability to control its own destiny on Sunday, taking on Kansas State. 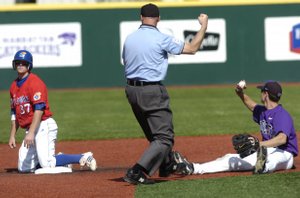 Manhattan — The storybook ending was in place - a two-out, two-run home run by Justin Ellrich in the top of the ninth inning that gave Kansas University's baseball team a dramatic one-run lead.

Kansas couldn't complete the fairy tale Sunday, allowing Ellrich's dramatic home run to be trumped in the bottom of the ninth of an 11-10 loss to K-State at Tointon Stadium.

"In college baseball and metal bats," KU coach Ritch Price said, "you know you've got to get three outs to win a ball game. Those are toughest outs to get, obviously."

Sunday's game stands alone in devastation. But what it meant was the ultimate punch in the stomach.

Kansas (30-27 overall, 9-18 Big 12) tumbled to ninth place in the conference standings after being swept by K-State. The top eight are invited to the Big 12 tournament in Oklahoma City, meaning the Jayhawks are staying home for the second straight year. They still haven't had a chance to defend their 2006 tournament title.

KU entered the bottom of the ninth up 10-9, but reliever Brett Bollman surrendered a single to Byron Wiley to lead off the inning. The next batter, catcher Rob Vaughn, stroked a double over third base and down into the left-field corner. Wiley scored from first to tie the game.

After a sacrifice bunt, KU intentionally walked the next two batters to load the bases with one out and have a double-play opportunity. Hard-throwing lefty Sam Freeman entered the game for KU and struck out Nate Tenbrink on three pitches.

But Freeman then hit Justin Bloxom on the left arm to force in the winning run.

"A pro guy? He bails," Price said of the inside pitch. "A college guy wears it like he's supposed to and wins the ball game."

The bitter defeat summed up KU's up-and-down season. The bats came out in a big way as the Jayhawks pounded 15 hits and hit four big home runs.

But KU's way-too-thin pitching staff was exposed as painfully deficient. Starter T.J. Walz lasted only two innings and failed to protect an early 3-0 lead, and Kansas went to the bullpen early.

Even worse? The man Price was forced to call on was Paul Smyth, normally the Jayhawks' reliable closer. Smyth worked four so-so innings but was out of the game by the time the ninth rolled around - when Kansas really could've used him.

"I think we would have been buried if we hadn't gone to him early," Price said. "One of the things we didn't want to do is wait until late in the game and then have the game blow up on us."

It was 9-6 Kansas State when Smyth left the game after 61 pitches. As it turned out, the fireworks were just getting started.

Kansas scored two in the eighth on a home run by Casey Larson to cut the lead to one. Then, with two outs in the ninth, Erik Morrison lofted a clean single to left field to keep the Jayhawks breathing.

Ellrich then worked the count to 2-2 and fouled off a couple of pitches before K-State stopper Daniel Edwards went inside with a pitch. Ellrich turned on it and hit a line drive over the right-field wall to put Kansas up one.

It did, and KU's dugout exploded. That proved to be the last happy moment of a frustrating season, though, as the Wildcats took back the game and completed the sweep.

Even after the loss, Kansas could've slipped into the Big 12 tournament if Oklahoma lost against Oklahoma State. But the Sooners finished a 10-4 victory a couple of hours later, putting the final nail in KU's coffin.

"It's pretty indicative of how hard we've played all season long," Price said. "To put that many runs up and lose on Sunday is pretty tough to do."

Sad. Lose three in a row to K-State to end the year...and they advance and we don't. We should have been able to win one game....one game! Price's seat is officially warm.

the extra week and three games would have REALLY benefited the underclassmen, and been great for the Seniors ...We also would have had another crack at Mizzou!oh, well!

Sad ending to a bad year! The tam has no heart and did not play good enough to earn a berth in the Big XII.This team is going NO WHERE with major pitching talent.NOTE to Coach Price: Either get your son's to pitch or go to Arizona/Cali JC and get some studs to throw the ball against Big XII opponents.

Something needs to be done ...all day I waited for more comments, some fan outrage and/or support couldn't hurt, either!

FlaHawk -- Have you even seen a game this year? If you're just relying on the LJW articles, then forget about it. They don't care about KU Baseball. While the losses have been heart-breakers, I hardly call this a team without heart. They've battled back many times to win games. During Sunday's game they came back from 4 runs down to take the lead into the bottom of the ninth. One unfortunate pitch is what led to the K-State win, nothing more. We've lost 11 seniors off this year's team -- great players on the field and even better people off it. It's too bad they won't have a chance to extend their final college season.

That saves me a trip to OKC for Memorial Day weekend. I guess that's a good thing with this lousy economy and gas prices approaching $4/gallon.The Countdown to August 30th begins!