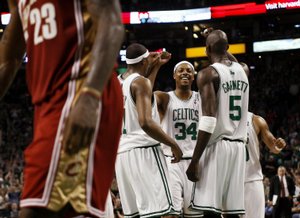 Boston's Paul Pierce (34) is congratulated by teammates Kevin Garnett (5) and James Posey during the fourth quarter of their 97-92 victory over the Cavaliers. Pierce had 41 points in the victory Sunday in Boston.

Boston — Paul Pierce hit a shot. Then LeBron James answered. Pierce hit another, and so did James.

It was like that all game long, two of the NBA's best trying to carry their teams to the next round. Pierce and the Boston Celtics succeeded, beating the Cleveland Cavaliers, 97-92, on Sunday.

Twenty years earlier there was another thrilling shootout in another seventh game of the Eastern Conference semifinals in Boston - Larry Bird vs. Dominique Wilkins.

And the result was the same: a narrow Celtics victory that sent them to the conference finals against Detroit.

Pierce scored 41 points, James had 45, and Boston remained unbeaten in the playoffs at home, where the first two games against the Pistons will be played Tuesday and Thursday night.

"It is a great feeling," Pierce said. "We knew this was going to be a tough, tough series."

In a seven-game series in which the road team never won, the Celtics had many green-clad fans on their side.

And when the game started, one fan bellowed, "Not today, LeBron."

"I'm very aware of the game," Pierce said. "They don't ever let you forget it when you look up to the jumbotron."