Running out of chances

Kansas University's Nick Faunce swings his batting helmet in frustration after being tagged out at home plate. The Jayhawks lost their third straight game, 5-4, to Kansas State, Saturday in Manhattan, but they still can make the Big 12 tournament with a victory or an Oklahoma loss today. 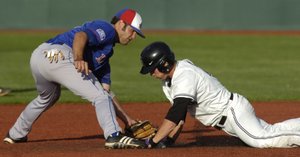 KU's Erik Morrison doesn't quite tag out a K-State baserunner Saturday, May 17, 2008 during the Jayhawks' road game in Manhattan.

Manhattan — Kansas University's baseball team tripped over its own shoelaces once again on its way to the finish line.

Still, the Jayhawks aren't out of this thrilling race. Quite the opposite, in fact.

Though Kansas didn't get it done Saturday, losing 5-4 to Kansas State at Tointon Stadium, the scoreboard-watching came with nothing but positive results.

Texas Tech and Oklahoma both lost Saturday, meaning Kansas still controls its own destiny toward getting a Big 12 Conference tournament berth. A Kansas victory or an Oklahoma loss today will clinch the eighth and final spot for the Jayhawks and send them to Oklahoma City - the season-long aspiration.

The Jayhawks stumbled to their third straight loss Saturday, but actually played well in the thrilling showdown. They had good at-bats against five Kansas State pitchers, had a solid effort out of their bullpen and cut down on the costly mistakes that doomed them in Friday's miserable 5-0 loss.

Saturday's game usually was a one-run affair throughout, but Kansas led only once - when catcher Buck Afenir hit an opposite-field home run in the fifth to put the Jayhawks up 3-2.

Kansas State answered with two in the bottom of the fifth to go up 4-3. The Jayhawks tied it again in the seventh, when Ryne Price hit a sacrifice fly for his 60th RBI of the season.

At that point, it was anyone's guess who was going to prevail.

"Certainly," Price said, "that was a great college baseball game."

KU's bullpen did a fine job relieving starter Andres Esquibel, who lasted only 41â3 innings. But Kansas State finally broke the stalemate in the bottom of the eighth, when Derek Bunker poked a single up the middle off Paul Smyth and plated Dane Yelovich for the winning run.

Kansas (30-26, 9-17) went down in order in the top of the ninth, and most of the players didn't say another word before boarding the team bus.

"They hurt right now, there's no doubt about it," Price said. "If you would've told us we were going to lose two straight to these guys, I don't think anyone in that dugout would believe it's possible."

That confidence needs to return to today's 2 p.m. series finale at Tointon for Kansas to have a chance. The Jayhawks remain a half-game ahead of ninth-place Oklahoma, the lone team Kansas needs to care about now. Texas Tech's loss guarantees it can't catch KU in the standings.

If KU wins today, Oklahoma can't catch up, either.

That would be enough to prolong the season for at least another week.

"We're just going to have to really clutch up," Afenir said, "and I think we will."

15 runs in their last 5 games....KU just isn't hitting....and for sure, clutch hitting. If the Jayhawks can't get it done today, them Mr. Price is on the hot seat. two years after a league title, and we can't beat K-State? the kitties have done NOTHING in baseball historically...and they're handing it to us.KU better win today. it's really about time.

Coach Price has done a great job ..... of getting his kids to play for him. Face it without the Price boys KU would hardly never win a game.KU has never had a good baseball program. It is hard to tell whether it is the Coach or the school or the total lack of talent in the state of Kansas.Whether they finally beat KSU today or not the program is running out of time as their are no more Price boys in the pipeline!

Sorry, but the 'hawks don't deserve to be in the tourney...pretty pathetic down the stretch. Wouldn't have wanted to back in anyway.

Indeed ...I was sitting in front of a rather pleasant Wildcat fan on Friday in Lawrence, about halfway through the shutout, I turned to him and said: is your team really this good?To which he replied: "No"The program has made some progress: better non-conference schedule and record, a tourney title and improved facilities.But after six years ... especially in light of what Nebraska has maintained and Mizzou has accomplished.

Make it happen for yourselves Jayhawks! Got get this win on Sunday!