Jammin’ in the Jungle

Tom Keegan, sports editor for the Lawrence Journal-World, and Kevin Romary, 6News sports director, instruct their players during halftime of the Kansas Barnstormers game on Wednesday, May 14, 2008 at LHS.

KU seniors hit the hardwood with Romary, Keegan on the sidelines

Russell Robinson, Sasha Kaun, and Darnell Jackson on the same basketball court with Kevin Romary and Tom Keegan? It may not make much sense, but those KU basketball National Champions hooped it up with the World Company's sports media giants tonight at Lawrence High School. 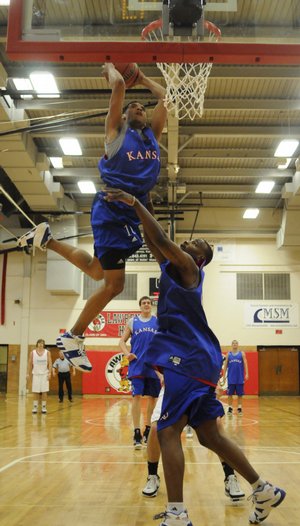 Who would you want to play against in a game with the KU Men's Basketball Team?

Baba Diallo clutched a clump of sweaty basketball clothes tightly to his body Wednesday night. Lawrence High's 6-foot-6 senior forward, still dripping with perspiration, was savoring his last minutes in the LHS gymnasium, not believing the contents of the clothing in his possession.

"You see I've got it like a football bundle," Diallo said. "Nobody's taking this from me. This is too special right now."

They were collectibles from a memorable evening of basketball between Kansas University's senior class - playing its last barnstorming game of a state-wide tour - and Diallo's area all-star high school hoops squad.

A little more than a month removed from a national championship victory, KU's seniors defeated the preps, 100-91, in a running-clock game that contained all the hijinks of a Harlem Globetrotters affair with just as little defense.

Every Jayhawk senior who played - including Jackson, Robinson, Brad Witherspoon, Jeremy Case and Sasha Kaun - contributed to the team's 27 dunks, punctuated by an alley-oop pass to Jackson from a fan who came down from the stands in the final seconds. Even Stewart, who was coaching with a brace on his right knee while recovering from a fractured kneecap, tossed a lob from the bench to Jackson for a slam.

A portion of the proceeds for the event benefited Lawrence High assistant football coach Devin McAnderson, battling myelodysplastic syndrome, a form of leukemia.

Afterward, Witherspoon tried summing up the barnstorming experience, which spanned much of the state.

"It's been a lot of fun going all over Kansas with the guys," he said. "Especially like Russell, who's from New York. It's a lot of fun to hear him talk like, 'What are all these cows?' But it's just been a blast."

Offensively - and there were plenty of points to go around - Case stole the show for the seniors, scoring a game-high 30 points with six three-pointers. He also was on the receiving end of a Superman-like dunk, soaring through the air with the help of the outstretched arms of Jackson.

Case, who is in graduate school at KU, was asked about filling the graduate student manager vacancy on KU coach Bill Self's staff following Michael Lee's departure to Gardner-Webb University.

"I'm definitely interested," Case said. "Coach Self and I haven't really sat down and spoke about it yet. I plan on going to see him whenever he gets back from recruiting, and we'll see. But it's definitely a possibility."

For the prep all stars, Free State High senior Weston Wiebe led the way, tallying 23 points and a few dunks of his own. Wiebe said he loved playing in a stress-free atmosphere against the Jayhawk seniors.

"Our two rules were, 'Don't get anywhere near them when they dunk and don't foul, either,'" said Wiebe, who snagged a Jackson undershirt after the game.

Lawrence's John Schneider and Danielle Bird and Free State's Craig Rosenstengle also participated, playing in a five-person Lawrence-only shift that included Wiebe and Diallo. Drew Berg, Tanner Swafford, DJ Fritzel, Caleb Denton and Gabe Belobrajdic made up the other five for the all stars, who kept the score close for much of the game.

"We were thinking they were going to come in and kill us, but they made it fun for us and the crowd," Diallo said. "I enjoyed every second of it."

That's funny what Russ was asking about the cows. LOL

I think Case would make a great GA coach and hope it works out for him (and it would make for a deadly coach staff team with Manning in the post and Case bombing threes). Next to Billy Thomas, Case has one of the prettiest long range shots I have seen on a KU team in the last 20 years.

Keegan needs to go back to Milwaukee if he loves Marquette so much.

Looks like Keegan was going for the Bobby Knight look on the sidelines, with slacks and a sweatshirt. Romary on the other hand was all business. I guess he has a standard he has to maintain from being on TV.

Anyone know what the seniors make ($$$) by taking part in these barnstorming games?

Where do you come up with the fact KU has the #1 recruiting class in the country this coming year?

Case has given KU a lot of good years and would be great on the staff. He came up big against Villanova and will be a KU asset for years to come. Maybe even replace Bill Self in 15 years or so.

I've seen no "official ranking": However, if you include KU's #1 and #3 nationally ranked JUCO guys, in addition to the 5 kids in the top 80 nationally, including 3 in the top 40, there's no way it's not.

So after LSU claiming he would "probably" stay, J'mison Morgan has officially been released from LSU. Rivals claims that he's #6 nationally.Obviously the two schools on his mind, now, are UCLA and KU. The question is, does he want to raise his ceiling even more and win a national championship? If he is smart (and he is) he will take a look at tape of Darnell Jackson as a freshman, and then in the final four after months of hard work with the incredible big-men coaches KU has...With already the #1 recruiting class in the nation, and room for "squeezing" one more into a Kansas jersey (depending on a number of variables including walk-ons), it seems a good chance Morgan would be considering helping KU win another one, and helping himself along the way. And if he needs help turning into a stronger, more sound impact player in the NBA, man, does it get any better for a 6'10" guy than 6'11" Danny Manning as your fundamental coach?If he thinks intelligently and plans out his future instead of "jumping" to the west coast ala OJ Mayo... wow... we (and he) could be in for an incredibly fun, historic, groundbreaking year.

Quite the contrary!The seniors take home the VAST majority of all the funds.This is their first money maker since they have graduated and they make a killing, especially this years class.So, don't be fooled by the "charitable" thing. If in fact there is for each game (very doubtful or else it would be advertized as such the one in Lawrence) they make a hauling. They have charged 10-15 a head and by all accounts this years turnouts were HUGE. Hence, lots of money. They also auction personal items which are bringing in thousands and thousands of dollars.

they don't make much, my impression is that most of the games also have some charitable recipient getting part of the take.

In short, this 2009 KU team, with the addition of a coachable big one-and-done guy like Morgan, would win the national championship.

some guy keeping another guy's shorts? thats weird. freak. why don't you just go and bang him like all the other girls do. hahahahaha