Woodling: Son of voice of Jayhawks paying dues in Arkansas 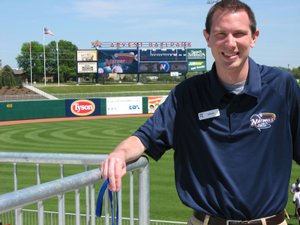 The young usherette tapped Steven Davis on the arm and said, "Excuse me, but do you know where these seats are?"

Davis looked at the tickets, smiled and pointed to a section behind home plate. Then Davis continued giving me a tour of Arvest Ballpark, brand-spanking-new home of the Kansas City Royals Class AA farm club in Springdale, Ark.

"This park is incredible," Davis told me. "It's going to be the best stadium in minor-league baseball, if it isn't already."

Not only is Davis the radio announcer for the Northwest Arkansas Naturals, he is listed as the club's baseball operations coordinator, a nebulous title meaning he does a little bit of everything : or almost everything.

"I haven't had to sell a hot dog yet," he quipped.

I've known Davis since he was knee-high to a grasshopper. In fact, he was so young when his dad, Bob Davis, introduced me to him that I still call him Stevie.

Once upon a time, while he was at Lawrence High, Davis told me he wanted to become a sports writer. But his chip fell off the old block, and, while a Kansas University student, Stevie became Steven and opted for a career in sports broadcasting, just like his old man.

If you don't know who Bob Davis is : well, if you're reading this I know you do.

Steven Davis graduated from KU in May of 2005 and a few days later was on his way to Idaho Falls, Idaho, where he would serve as radio voice of the Royals' Rookie League team for three summers.

Then, when the Royals opted to move their AA franchise out of Wichita's archaic Lawrence-Dumont Stadium to the glistening new facility in burgeoning northwest Arkansas, Davis was hired to broadcast all 140 of the Naturals' games on KURM 790 Radio.

That's no cow pasture station, either. While driving back to Lawrence, I kept 790 on the AM dial until it died out, and I was surprised the signal reached nearly to Iola. How many people listen to the Naturals is another question. KURM-FM, for instance, carries St. Louis Cardinals games.

The minor leagues are, after all, the minor leagues. Everyone is a hopeful. The players hope to reach the major leagues. The umpires have the same dreams. And so, too, do the radio announcers. Everybody - particularly those in pro baseball - has to pay his dues.

I went to northwest Arkansas for three reasons - 1) to see the new stadium (it's a classier version of CommunityAmerica Ballpark); 2) to check out the Royals' AA prospects (don't hold your breath); and 3) listen to Davis on the airwaves.

We left the Naturals' game against the Tulsa Drillers in the eighth inning so I could listen in. I set the car radio to 790 AM and took in the last inning. I'm prejudiced, but I thought Steven Davis was very good. Clearly, he had done his homework. He reeled off loads of info about the players on both teams, and he kept listeners aware of the situation at all times.

Young Davis is just as glib as his dad, but his voice is a bit deeper, and he seems to be more reserved than his father, who never has been accused of downplaying a home-team high point.

If you're ever in Northwest Arkansas (or south of Iola), you might want to tune into a Naturals' game. Or go visit Arvest Ballpark and say hi. Stevie :er, Steven : Davis will be glad to see you.

Living in NWA, I have had the opportunity to listen to Steven Davis now for about a month and he is really good. He does not sound anything like his old man, more like a Ryan Lefevre from the Royals. It is great to have another KU guy down here in NWA (there are quite a few of us)!