Kansas University pitcher Nick Czyz delivers during the Jayhawks' 17-15 victory over Oklahoma. The Jayhawks outslugged the Sooners on Friday at breezy Hoglund Ballpark.

An important weekend for the Kansas baseball team begins tonight. The Jayhawks sit in last place in the Big 12 standings entering their three game series with Oklahoma. 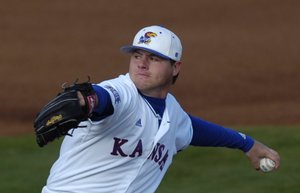 Kansas University pitcher Nick Czyz delivers during the Jayhawks' 17-15 victory over Oklahoma. The Jayhawks outslugged the Sooners on Friday at breezy Hoglund Ballpark. 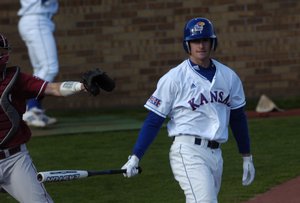 KU's Casey Larson shows his frustration after an at-bat. Despite this bad plate appearance, Larson had three of KU's 16 hits.

Just this one time, the howling wind offered no help.

Kansas University closer Paul Smyth served up a strike to Oklahoma's cleanup hitter, Aaron Baker, with two outs and one on in the ninth inning. Baker crushed it to left-center field, carried along by the strong breeze blowing out on a chilly Friday night at Hoglund Ballpark.

It looked like a tie game. But KU center fielder Casey Larson made the catch with his backside against the wall, preserving the Jayhawks' wild 17-15 come-from-behind Big 12 Conference baseball victory.

"I thought it was gone," KU coach Ritch Price said. "I can't believe that ball stayed in the yard."

More than three hours of Hoglund Ballpark batting practice Friday dictated that Baker's shot should've been a two-run dinger. OU teammate Spencer Selby hit a similar ball in the fourth inning that thunked off a tree past the fence for a grand slam. The Sooners scored seven more runs in the fifth and had a comfortable 11-5 lead at one point.

But the Jayhawks' bats were just warming up, as the unseasonably chilly weather made life rough for all nine pitchers used by the two teams - except for Smyth, who got away with one and picked up the win.

"I really thought there was no lead too safe," KU freshman Jimmy Waters said. "We went down all those runs, but my personal feeling was we were never out of it. I think that's the way a lot of people on the team felt about it, too."

Apparently. Kansas (27-22 overall, 6-13 Big 12) scored four times in the seventh to cut OU's lead to 12-11. The Sooners (29-18, 6-12) scored three more in the top of the eighth on a bloop double, but the Jayhawks answered that threat with a six-run eighth inning to take back the game. It was their first lead since it was 2-0 way back in the second inning.

Interestingly enough, the bottom of the order provided the biggest spark. Waters, batting eighth, was 3-for-5 with a towering home run and five RBIs, including a two-run double in the pivotal eighth inning. Another freshman, Tony Thompson, was a perfect 3-for-3 and had KU's only other home run as the nine-hole hitter.

"Those guys have really struggled throughout the season," Price said, "and tonight they emerged like the all-state players they were in high school."

Interestingly enough, KU's 3-4-5 hitters were a combined 1-for-12, the only hit between them the game-winning two-run single by Buck Afenir in the eighth.

The victory was Price's 200th as head coach at Kansas, but it meant a lot more in the short term. The Jayhawks now are back in the logjam at the bottom of the Big 12 standings and have a chance to overtake Oklahoma at 2 p.m. today when the two squads meet again.

The top eight in the standings are invited to the Big 12 tournament later this month, meaning only two of the 10 teams who participate in baseball will be left home. Kansas made a needed step Friday to make sure it's not one on the outside looking in.

"It's about winning series," Price said. "Now that we're home, we've got to start winning some series."