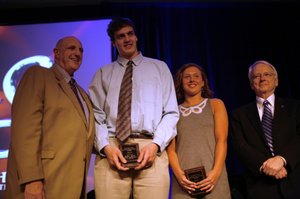 That title got plenty of love Wednesday at the Jayhawk Senior & Scholar Athlete Banquet at the Kansas City Marriott Downtown. But for Kaun, the computer engineering degree he's earning later this month was recognized, too.

Kaun, along with swimming and diving's Terri Schramka, was named senior scholar athlete of the year.

"It's pretty cool," Kaun said of the award. "It's a real honor to be chosen. It shows the hard work has paid off. I'm pretty excited about it."

In addition, Mario Chalmers was recognized for being the Final Four's most outstanding player, and the NCAA trophy and Orange Bowl trophy were displayed at the end of the night after a humorous skit.

It was a special year for KU's most visible sports. But associate athletic director Paul Buskirk was beaming Wednesday for many other reasons.

"In addition to the Orange Bowl and national championship," Buskirk said, "these students broke nine GPA records, including setting the all-time GPA record for the entire department. For me, to watch the Academic All-Americans sitting up front, it gives me goosebumps all by itself. It was absolutely a joy."

There were 11 Academic All-Americans total, an impressive six from swimming and diving.

Congrats jayhawks. But, why is this event being held in Missouri. We are the KANSAS Jayhawks. If you want to go to KC, find a nice hotel in our state. Nonetheless, glad to see our athletes were recognized.

you know if you watched kuan play in the tournament, he played his heart out and like the others... straight from the gut. that is how a team wins by playing for each other and not for one star player (memphis,kstate,usc,etc) i think its great that we dont get those 5 star phenom "one stop shop" kids because all it does is hurt a program and screw the building process. great job coaches!rock chalk!

chicagoeddie.....I understand your point, but don't doubt for a minute if KU landed one of those, most fans would be all for the one-and-done kids. It is always which side of the fence your team is sitting on.

TheTruth08 has the truth about both Kaun and Robinson.

Kaun had his struggles early in the year. But you can argue that he finished the season (in tournament play) as the team's best post player. He emerged as the team's best post defender, gave them scoring off the bench and KU doesn't beat Davidson without him. He's the one guy on the KU roster I would have felt comfortable with defending any post on the floor. He's physical (when interviewed most KU post players said he's the one player they hate to go against) and with some polish, he'll be an NBA forward/center for a long time. And Russell Robinson is one of the best defensive guards KU has seen in a long time. The man is like a defensive back on the court! Great instincts and always looking for the ball. Against North Carolina, If I remember it right, during their run, Russ was being posted up by Danny Green (or some NC player) Deon Thompson threw a pass into him. Russ, slipped around Green, came out of nowhere, anticipated the pass and collected the steal. It just wasn't fair. You just have to see it! There's no way he would have thought Russ was good enough to get to that ball. Dude is a theif! I'm hoping he finds his way onto an NBA roster soon. If Chris Duhon and Marcus Banks can hang around on somebody's bench, I'm sure there's a spot for Russ. He'd school them both.

Russell has been locking down NBA point guards for years. OK, I'm going to bed...haha.

I see on here all the time people bashing one and done players and saying that they would hurt the program... Most of you must have forgotten that Brandon Rush was supposed to be that one and done player... Look what happened with his situation.... He ended up staying for three years and was a huge part of the run to the championship... The same could also be said for Darrell Arthur... He was projected to be drafted after his freshman year based on potential... He was also crucial in the championship run

Maybe they just wanted to flaunt their stuff in Misery.

Kaun has been great for us, and I'm glad he will be a productive member of society with or without the NBA.

I'm with you natehawk. Makes me wonder if there are plans to move campus to KC in our future. Lawrence is the home of the Jayhawks. Our games and our celebrations should be taking place at home and the Athletic Department should be sharing the wealth with our local businesses, not Kansas City (MO or KS).

he's getting a degree in computer science...

My guess is that Kaun values his computer engineering degree more than any time that may be spent in the NBA, and that is as it should be. He has enough talent that, as many indicate, he could have a number of years in the NBA even if it is as a backup. His background indicates he is looking beyond any NBA money, too bad more players can't look beyond their playing days.