Hundreds of Kansas University fans filled Massachusetts Street on Sunday, with one even enjoying a little body-surfing, after KU advanced to its first Final Four since 2003 in the NCAA basketball tournament. The Jayhawks defeated Davidson 59-57 Sunday in thrilling fashion and will face North Carolina and former KU coach Roy Williams on Saturday in San Antonio. 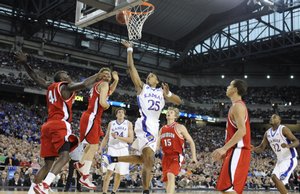 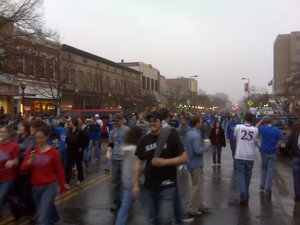 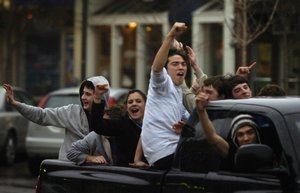 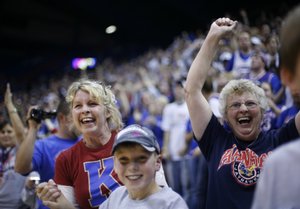 6News will have special live coverage Saturday night following the Kansas University-North Carolina game. We will have live reports from downtown Lawrence, highlights and analysis of the game - as well as postgame coverage from San Antonio.

Massachusetts Street turned into a tangle of triumph after Kansas University's Elite Eight victory over Davidson, sending the Jayhawks to the Final Four for the first time since 2003.

Thousands of people poured out of bars and descended upon downtown, clogging Massachusetts Street and paralyzing traffic as circles of jubilant fans mobbed each other, exchanging high fives and hugging total strangers.

KU student Maggie Lang, 21, watched the chaos that developed on Massachusetts Street between Ninth and 11th streets, where fans chanted "Rock Chalk, Jayhawk" and lifted everything from KU garbage cans to their fellow fans in celebration.

"I was shaking during the end," she said. "I really thought (Davidson star) Stephen Curry was going to make a three in the last 16 seconds. I was terrified."

Erin Cook, a KU junior from Lenexa, also worried KU wouldn't hold on to its lead.

"I was just weak at the end of the game," she said. "I collapsed and then ran around and hugged my friends."

But the Jayhawks held on for a 59-57 victory, and the celebration that unfolded downtown was one for the history books.

After the game Massachusetts Street quickly turned into a parking lot, as fans marched down the street, cheering amid honking horns and constant cheering. Bare-chested young men waved their shirts, and other fans stood on cars' roofs or hung out of their windows, high-fiving anyone who would oblige.

Members of the KU band played an impromptu concert at the intersection of Ninth and Massachusetts streets, and fans, soaked from an evening rainfall, clapped and sang the fight song. Late Sunday night, police closed off Massachusetts Street from Ninth to 11th streets to accommodate the celebration. Revelers' cheers could be heard for blocks.

Lawrence police anticipated a boisterous crowd and sent extra officers to patrol downtown, a department spokesperson said. But that didn't stop fans from drinking beer in the open. Two young men attracted a crowd as they carried a keg of beer down the street.

"There's really no way to clamp down on that, and as long as they're not carrying glass, we're being pretty lenient," said Lawrence police Sgt. David Hubbel.

"They're having a fantastic time. There's a lot of celebration on the sidewalks and the streets," Hubbel said. He said the crowd was enthusiastic, but lawful, with a few fender benders resulting from the bumper-to-bumper traffic.

But the celebration took a turn for the worse as one woman was struck by a car at 10th and Massachusetts streets, shortly after the melee began. She was taken to Lawrence Memorial Hospital. No details on her injuries were available, but Hubbel said he did not believe her injuries to be serious.

Downtown vendors anticipated a KU victory and were selling Final Four T-shirts within minutes of the final buzzer.

Brian Hoffman, who owns the Sports Dome, 1000 Mass., ordered 100 T-shirts, with the hopes he wouldn't have to return them if KU lost.

"I took a risk," he said. But it was a risk that paid off. Hoffman said he anticipated all 100 shirts would be sold quickly. He said a larger shipment of the $18 dollar shirts would arrive this morning.

No love for Roy

With the victory, KU moves on to play North Carolina, which is led by former KU coach Roy Williams.

Fans quickly took aim at Williams, who won a national championship two years after giving up the helm at KU.

"I wish Roy the best," said Suiter, the fan who watched the game at Buffalo Wild Wings. "But that's in the past. We've moved on."

"He couldn't finish it at KU. He's going down now," Hahn said.

With a victory over UNC, KU would make it to the national championship for the first time since 2003, when the team lost to Syracuse.

I don't think I can say I wish Roy "the best". That's actually what I wish for our team. But I wish him well.

I agree with the dude from linwood. "he's going down now." he never closed the deal here and we're going to close it for him Sat.

What I loved most about the celebration last night was the thick Phog that rolled into town with the team bus. Coming out of Allen last night and then looking back and seeing it shrouded in Phog from our vantage point on top of Mount Oread was a religious experience.

Another omen of things to come!!!

It was awesome last night. Let's do it again on Saturday!