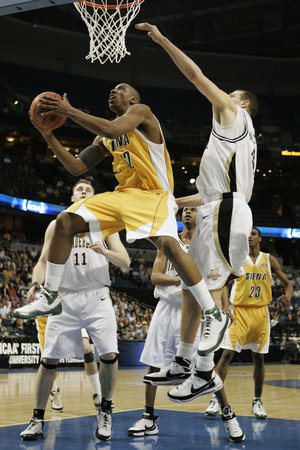 Siena's Alex Franklin (42) goes up for a shot against Vanderbilt. Siena upended the Commodores on Friday and will play another upstart underdog, Villanova, today. The winner will face Kansas University on Friday in Detroit.

Tampa, Fla. — The cozy feeling Villanova has heading into its second-round NCAA Tournament game against tiny Siena has nothing to do with overconfidence.

The 12th-seeded Wildcats (21-12) shed their role as underdogs with a first-round upset of fifth-seeded Clemson, but insist they don't feel like favorites going against an opponent that pulled off an even bigger surprise in the opening round.

Siena, the No. 13 seed in the Midwest Region, didn't squeak past fourth-seeded Vanderbilt. The Saints (23-10) dominated one of the Southeastern Conference's best teams to set up today's showdown for a trip to the round of 16 and a date with top-seeded Kansas University.

Villanova, one of the last teams picked for the field of 65, is the biggest name standing in Tampa following a day of shockers.

Technically, the Wildcats are favored over Siena because of their seeding. It's the same in the other second-round game here, a mid-major matchup between 12th-seeded Western Kentucky and No. 13 seed San Diego in the West Region.

In reality, it's difficult to label any of the remaining teams.

"The way our team has been all year, to hear us called the marquee team right now is funny," Villanova coach Jay Wright said Saturday.

"What went on here in the first round is just the beauty of the NCAA Tournament. We don't feel like favorites. We're going to wear a white jersey. ... Our guys watched (Siena's) game. We don't have to tell them: 'That's a great team; don't take them lightly."'

Fran McCaffery has transformed the Saints into a confident bunch believing anything is possible after they became the first Metro Atlantic Athletic Conference team to reach the second round since Manhattan in 2004.

A Philadelphia native who played at Penn and later coached at Lehigh, McCaffery is close friends with Wright, and there are numerous other ties between the Villanova and Siena programs that will make today's game special for both staffs.

"The bond with Philly coaches is very unique, considering for a long time we all tried to beat each other. But there is a tremendous respect. ... We all root for each other. Legitimately, genuinely," said McCaffery, who hired Francis after receiving a call from Wright.

Buonaguro has kept with up with the Villanova program since he and Massimino left. He joined McCaffery at North Carolina-Greensboro in 2004, then accompanied his new boss to Siena the following year.

"It's an intriguing matchup for me, obviously. I have great, fond memories. Jay's a good friend of mine. Coach Massimino is going to come to the game," Buonaguro said.

"From that sense, it's tough. ... It'll feel funny, but once the ball goes up, I've got to try to help Fran as much as I can to win the game. Then afterward, when I look back on it, I'll say, 'Wow, this was something."'

Some of Villanova's players joked with Francis that they can't wait to see what he has in store for them. Wright said his former assistant, who gave up a job in business to accept a position on his staff paying $10,000, knows everything about the Wildcats.

"It's just unbelievable how this worked out," said Villanova's Scottie Reynolds, who had 21 points and helped the Wildcats rally from an 18-point deficit to beat Clemson in the opening round.

Knowing Wright and the makeup of Villanova's players, the comeback didn't surprise McCaffery.

"I will be disappointed either way," Francis said, "because there will be one team going home that I don't want to see going home."