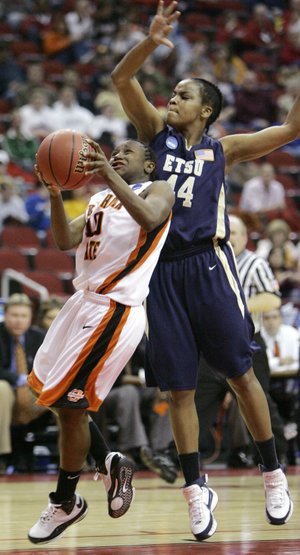 As usual, the official's position prevailed.

Williams' foul sent Alison Lacey to the line with 12 seconds left, and she made the two free throws that nailed down Iowa State's 58-55 victory over Georgia Tech on Saturday in the first round of the Greensboro Regional.

"Initially, I felt like it was a clean steal," said Williams, who averages 4.4 steals and had three in this game. "Once they blew the whistle, it kind of hurt a little bit."

Lacey also made a huge play moments earlier, hitting a runner in the lane with 47.4 seconds left after Georgia Tech had pulled within a point. Her clutch shooting was just enough to push the seventh-seeded Cyclones (21-12) into Monday night's second round against the Rutgers-Robert Morris winner.

With the ISU campus only 35 miles to the north, it was essentially a home game for the Cyclones, who rank fifth nationally in attendance at 9,388 per game and had close to that number of cardinal- and gold-clad fans in the stands.

They needed all the support those fans could muster to survive the back-and-forth game against the quicker, more athletic Yellow Jackets (22-10), the No. 10 seed. Iowa State trailed by four at halftime, built a 13-point second-half lead behind freshman Kelsey Bolte's long-range shooting, then had to fend off Tech at the end.

"Today was a microcosm of our season," Iowa State coach Bill Fennelly said. "We don't look fancy, but we get the job done."

Albuquerque, N.M. - Angela Tisdale scored 26 points, and her taller teammates dominated on the boards in Baylor's victory over Fresno State.

Baylor (25-6), the 2005 national champion, never trailed against the Bulldogs (22-11), who were first- and short-time visitors to the tournament.

The No. 3-seeded Bears, with Tisdale scoring seven points, took control with a 17-2 run that put Baylor up 27-11 with just under nine minutes left in the first half. The closest the No. 14 seeded Bulldogs got after that was 27-21 on the heels of a 10-1 run.

Baton Rouge, La. - Morenike Atunrase scored 19 points off the bench to lead Texas A&M to a rout of Texas-San Antonio.

The second-seeded Aggies (27-7) had an easy time with the overmatched Roadrunners (23-10), taking a lead to open the game and never relinquishing it.

No. 15 seed Texas-San Antonio, making its first appearance in the tournament, attempted only 15 shots in the first half. The Roadrunners committed 30 turnovers, allowing the Aggies to score 38 points off them.

It wasn't the sharpest game Oklahoma State has played this season. The third-seeded Cowgirls (26-7) committed 21 turnovers and never could blow it open. But they'll take it.

Oklahoma State won in the NCAA Tournament for the first time since 1996. Maria Cordero had a season-high 23 points and nine rebounds, Taylor Hardeman scored 13, and Shaunte Smith added 10 points and 12 rebounds.