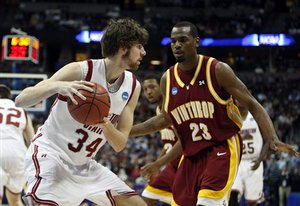 Winthrop forward Taj McCullough, right, comes in to cover Washington State forward Robbie Cowgill as he pulls down a rebound in the second half of a first-round NCAA East Regional basketball game in Denver on Thursday, March 20, 2008. Washington State defeated Winthrop 71-40.

Denver — Tony Bennett has one of those little inspirational mottos on his desk that reads, "There's nothing less important than the score at halftime."

"This was one of those cases," the Washington State coach declared after watching his Cougars turn into the big, bad bully in the second half of their 71-40 victory over Winthrop on Thursday night.

The fourth-seeded Cougars broke away from a halftime tie to beat the Eagles in the East Regional behind 19 points and eight rebounds from Aron Baynes.

Kyle Weaver and Robbie Cowgill each had 14 and Derrick Low scored 11 for Washington State (25-8), which will play Notre Dame in the second round on Saturday at the Pepsi Center. The Fighting Irish beat George Mason 68-50.

The Cougars, 51-16 under Bennett, broke open a 29-29 halftime tie with a 23-4 run to cruise to their second straight opening-round win in the NCAA tournament.

"I told our guys at halftime, 'It's one of two things, you're either scared or you're being overconfident. And I said, 'You'd better figure out which one it is and make a change,'" Bennett recounted.

Whether it was nerves or bluster, it was gone by the time the Cougars came out of the locker room and shot a blistering 65 percent in the second half while holding the Eagles to 16 percent (4-for-24).

After making four of eight from beyond the arc in the first half, the Eagles (22-12) stayed away from Baynes and Cowgill down low and missed their first seven shots, four of them from three-point range.

"The shots we were taking were good looks," Taj McCullough said. "But it was like a lid was on the basket and they were bouncing out."

And that anguish seeped into every aspect of their game.

"We got frustrated," Winthrop coach Randy Peele said. "And we've got a lot of new guys, when you struggle to score, it shows up on your ability to defend."

McCullough, who led Winthrop with 17 points, ended the drought with a breakaway dunk at 13:19 - his only basket after halftime - and Michael Jenkins, the Eagles' leading scorer, made his first and only bucket at 12:43 to pull Winthrop to 40-33.

The Cougars responded with a 25-1 run to make it 65-34 and erase all doubt about another shocker like the one Winthrop pulled off last year in upsetting Notre Dame in the opening round of the NCAA tournament in Spokane, Wash.

The Eagles surely were dreaming of another first-round stunner when they went into the locker room tied despite Jenkins having missed most of the first half in foul trouble.

Bennett was sure concerned at halftime, though.

"These guys are shooting the ball well. They're getting easy looks. They're running good stuff. We're having a hard time scoring," Bennett said. "But you're always in there going, all right, do we have enough to come out? I hope our league prepared us."

"Yeah, whoever guarded him the first half didn't do a very good job," said Cowgill before delivering the zinger: "I had him in both halves."

Gaynor scored 15 points for the Eagles, all on 3s, including one in the waning seconds that allowed the Eagles to avoid a single-digit second half.

As it was, the Eagles were outscored 42-11 after halftime.

"It was kind of fun to look up each kind of break and see 29, then 34 for a little while," Cowgill said.

Baynes made all nine of his shots, three of them rim-rattling dunks in the first half.

The game marked the end of a difficult year for the Eagles and Peele, who had to deal with the death of backup point guard De'Andre Adams a month after replacing his former boss, Gregg Marshall, who left for Wichita State.

Adams is still inspiring his teammates 10 months after his death in an auto accident last May.

His picture is on a banner at Winthrop Coliseum in Rock Hill, S.C., the energetic backup point guard whose wild on-court celebration was the signature moment of the Eagles' upset of Notre Dame in last year's tournament.

Peele said he sensed the same confidence walking into the Pepsi Center, and they showed that swagger in the first half before the Cougars wiped away any thoughts of another first-round upset.