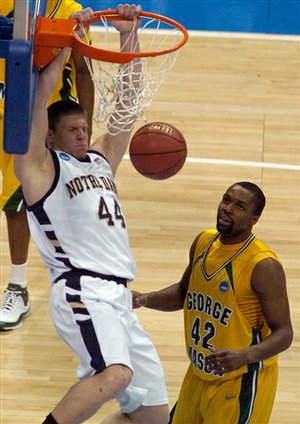 Notre Dame forward Luke Harangody, left, hangs from the rim after dunking the ball as George Mason forward Folarin Campbell looks on in the second half of Notre Dame's 68-50 victory in a first-round NCAA East Regional basketball game in Denver on Thursday, March 20, 2008.

Looking for the next George Mason?

Sad to say, but it won't be George Mason.

America's NCAA darling two years ago was just another first-round underdog this time around - overmatched and never really in it Thursday night in a 68-50 loss to Notre Dame in the East Regional.

Luke Harangody had 18 points and 14 rebounds to lead the fifth-seeded Irish (25-7) to their first tournament victory in five years and a meeting Saturday against Washington State, an earlier 71-40 winner over Winthrop.

The 12th-seeded Patriots (23-11) had two starters left from their magical run to the Final Four in 2006, a string of games that showed little guys still can break through and turn March Madness into a true free-for-all for more than just a game or two.

One of those players, Will Thomas, had a great game - 10-for-14 for 25 points and seven rebounds. But he had his head buried in a towel as the clock ran down. Because really, this George Mason was nothing like that George Mason, and the first day of the tournament ended with its big-name underdog on the way home.

"I guess I didn't really appreciate it, until today," the other 2006 starter, Folarin Campbell, said of the Final Four trip. "Every team in the NCAA tournament is going to be a great team. We played against a great team today. Just to know what we did two years ago, playing Michigan State, North Carolina, Wichita State and Connecticut. I mean, I look back at that and I just see how remarkable that run was."

The Patriots fought hard, but this game really wasn't close.

It got out of hand early, during a 14-minute stretch of the first half in which the Patriots shot 2-for-18 and watched an early 7-6 lead turn into a 29-12 deficit.

They got only one shot on pretty much every trip down. And though they were pesky - swatting and slapping the ball away from Notre Dame's post players and rebounders - they couldn't come up with loose balls, and wound up giving away too many open 3-pointers and easy layups after ceding their position on defense.

Meanwhile, Campbell shot 1-for-12 and finished with four points. The whole team looked winded at times, maybe from the altitude, maybe from trying to go toe-to-toe with a bigger, better team for 40 exhausting minutes.

"If I would get past or have one (defender) on my hip, there was another big guy right beside him," Campbell said. "I mean, Notre Dame just played great defense. All my shots were contested. I tip my hat off to their defense."

Rob Kurz hit two 3s in a row during Notre Dame's first-half surge. He finished with those six points. Kyle McAlarney, suspended from school last season after getting arrested for marijuana possession, had a solid game - 15 points, four assists.

The star, of course, was Harangody, the all-everything Big East player of the year who notched his 18th double-double of the season.

Coach Mike Brey thought Harangody was pressing during a loss to Marquette in a quarterfinal exit from the Big East tournament that left the Irish a bit queasy coming to Denver.

Brey told Harangody to play like himself - not the way he thought the player of the year was supposed to play - and the results spoke for themselves. The Fighting Irish kept alive their string of not losing two in a row all season - a string now assured of lasting all year whether they win it all or not.

Notre Dame also proved it could win in the tournament. The Irish rededicated themselves after a disappointing first-round loss to Winthrop in 2007, the program's first trip to the show since 2003.

They made it a point to ignore the fact that they were playing America's favorite underdog.

"We certainly respected the nucleus of guys," Brey said. "But that was that run. This is a whole new basketball team. We didn't spend a whole lot of time on it. Of course, if they watched any TV, they got to hear about it all week."

Indeed, the whole notion of George Mason has taken on a different life in the last two years. Even with the game out of hand, the band kept playing "Don't Stop Believing" - the old Journey classic.

Two years ago, they took America by storm, making every game look easy and fun on their road to the Final Four. Not to be this time around, though it's still hard to discount what that program - and especially this year's seniors - accomplished.