KU forced to rally past Cornhuskers

Kansas guard Russell Robinson, right, tangles with Nebraska center Aleks Maric in the first half, with KU's Cole Aldrich at left. KU rebounded from a lousy first half to beat the Huskers, 64-54, Friday at Sprint Center in Kansas City, Mo. 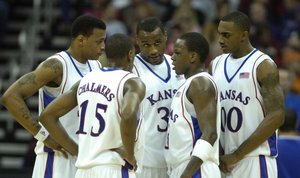 Points by Kansas' five starters combined in the first half

KU's turnovers in the first half

KU's turnovers, NU's points off turnovers in the second

Decisive KU run to open the second half

Points by which KU outscored Nebraska in free throws

Points by which NU outscored KU with three-pointers

Kansas City, Mo. — Maybe it's because Kansas University's basketball players had pummeled Nebraska by 35 points at home and 21 on the road this season and expected to pound NU again without breaking a sweat.

Whatever the reasons, No. 2-seeded KU trailed No. 7-seed Nebraska by nine points with 1:30 left in the first half and by five at halftime of a Big 12 tournament quarterfinal clash Friday night at Sprint Center.

KU's sloppy play - the Jayhawks had 12 turnovers against just five assists the first half - had KU coach Bill Self seething at the break.

"He was really frustrated with the way we were playing," KU senior forward Darnell Jackson said, crediting a cutting halftime speech as the main reason for KU's 64-54 come-from-behind victory.

"He didn't freak out at all. The only thing he said was, 'Do you want to go home? Or do you want to advance?' We answered him with our play the second half."

Rush said Self gave him a piece of his mind in the locker room for not being aggressive.

"I really deserved it. I played crappy the first half. I can't even say the words he said," Rush said with a smile. "He wasn't loud. He was moving around and talking. He said, 'We've got to pick up the intensity, energy, quit committing so many turnovers.'"

"He said we had to play better. We were flat. We didn't come ready to play," noted sophomore guard Sherron Collins, who had seven second-half points.

Obviously concerned his team came out with so little energy, Self is hoping for focus from the start in today's 3:20 p.m., semifinal game against Texas A&M - a 63-60 winner over Kansas State on Friday.

"The thing I was most disappointed in : we are athletic enough we should be a great loose-ball team, and they beat us to the loose balls. At halftime, we didn't talk about X's and O's. We talked about getting back to who we are: 'If it means as much to you as I think it does you'll play better.' And they performed pretty well the second half, especially starting out."

Self does understand - sort of - how a team like KU could be a bit off in Round One of the conference tourney.

"It's a shame you have to get on guys to get 'em to play like that," Self said. "But to be honest, how many teams struggle as a higher seed in the first round of a tournament against a team that won yesterday? It happens all over the country."

KU's coach wasn't particularly alarmed at the off nights of any individual players, like Arthur, who had six points off 1-of-4 shooting with five rebounds in 24 minutes.

"He just didn't have a good night," Self said. "He played better the second half. He needs to be a guy to get you 15, 20 (points) a night. Tonight he had six. He wasn't a presence like he's capable of being, but he'd been pretty good lately."

KU had just three double-figure scorers. Collins led the way with 13, and Jackson and Chalmers had 12 apiece.

For me...I was particularly disappointed in Aurther...he just seemed to be in a funk last night. And this year so far, he hasn't seemed like a player trying to get a 1st round pick...that's what it seems to me. Of course I'm just some fan at a keyboard...

Jayhawk fan forever, but champions maul the weak and defeat the strong. What a pathetic effort from the deepest team in the land, playing a home game against a team that won't be in the NCAAs and might not even make the NIT. Until a floor leader emerges and calls some people out early to get their respective heads out of their butts, this team is going to go out like a lamb. Rush says he isn't going to say anything to Arthur cause he's a man. What the heck do they talk about in those player huddles before an opponent's free throw: the pretty cheerleaders, the NBA scouts, the cool uniforms? How 'bout one of them says we're playing like a bunch of losers or something close to that?

every year its the same woeful tv screwing. they show big east games for teams not getting to the ncaa tour. but ku never gets on natl tv until they get to the semis. Who made espn mad at ku??? WHY? WHO,S IN CHARGE OF STUPIDITY?

You can bitch about it. Or you can order the ESPN Full Court package and see the games. Your choice.

I don't want to be critical of our team but we are so predictable that it makes me sick at times ... Every opponent knows we are going inside with the ball at the beginning of the game ( so they pack it in ). Games are often won or lost by less then 5 points so every possession is valuable ... Maybe its time to start Collins ( he has certainly earned it ) and how about a few penetrate and dish out to Rush or Chalmers for some open 3's to start the game.. so we don't have to come from behind as we so often do.. Not a recommendation just a thought.

Today's game is on ESPN2.

Speedy, You need to understand how things work before you go off on your rants. KU not being on national tv has nothing to do with espn being mad at KU.

It's called TV contracts. ESPN signed a contract with the big east to carry their tounament. If you want the big 12 to have every tournament game nationally televised, the BIG 12 needs to get a contract with a network. It is not random, and has nothing to do with which games are actually the better games for viewers.

on another note. The BIG 12 did sign a contract with ESPN that gaurantees at least 3 televised games per week for the conference. No other league has that garauntee.

Jayhawk - check out one of my earlier posts on the ESPN anti-KU conspiracy.

It has recently taken on new proportions with the recent news that the "cigarette smoking man" has been hired in the programming department at ESPN. We all know he is a D.C. native and consequently has a preference for all teams on the east coast.

I heard he also has a vacation house next to Coach K in the Hamptons.

Interesting watching NC and VA Tech play this afternoon. With less than 8 minutes to go, VT is up by 3. NC beat them by 39 in their last meeting.

More reason to believe, don't get too hung up on our slow start yesterday. It's difficult to play your A game 100% of the time. Particularly, against a much lesser opponent.

Anybody watch the VT North Carolina game? I can't express enough how much I hate Tyler Fagsbrough.

I was not into the shellacking of OU by Texas so I was watching, FLIP.

LOL - I could do a better job of boxing out than that pathetic performance by the VT player. How can you possibly just let him roam around free like that?

You have to admit, though, the guy has heart.

flip- you may hate Hansbrough, but there is no question he is the POY. Did you see the "little" things he did to help his team win. There is no doubt he gives 100% every game. I wish I could say the same for Rush or Arthur.

What's up with Knight's paisley purple shirt under that tan sweater on the post game?

THAT was more repulsive than Hansbrough.

Where the hell is our pre-game story? It's only 15 minutes until tip.

Have we been too hard on the LJW staff?

Hansbrough is an amazing player, you can always count on him.

was wondering the same thing. Maybe Ryan Greene had too many Miller Lights at KC live last night? Or perhaps Keegan got his seat for today's contest...lol.

Yeah, nobody seems to care about our Jayhawks. I get NO stories down here in Texas, not even much college basketball at all/.