Team’s the theme at banquet 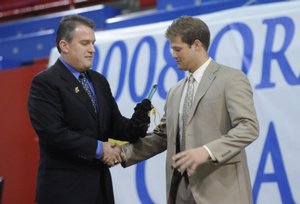 Sharing the wealth was the theme of Saturday's Kansas University Football Awards Banquet, and why not?

"We have a lot of talented players," KU coach Mark Mangino told the crowd in Allen Fieldhouse. "But we won this year because we have a really good team."

Only one of the big three awards had a solo recipient - the John Hadl Award for offensive MVP, which predictably went to quarterback Todd Reesing.

In all, 15 awards were handed out in the wake of KU's 12-1 season and Orange Bowl victory. Lawrence natives picked up two - running back Brandon McAnderson was given the Nolan Cromwell Award for leadership, and safety Brian Seymour received the Senior Academic Scholar Award.

Afterward, Mangino spoke briefly about the accomplishments of the 2007 season - after receiving a standing ovation by both the fans and the players.

"The Orange Bowl for us is not a destination," Mangino told the crowd. "It's a stepping stone for great success in the years to come. We're not satisfied."

¢Crutch alert: A couple of the returning players hobbled around on crutches Saturday night, raising questions regarding their availability for spring practices.

Defensive back Justin Thornton was sporting a hard cast on his left ankle, and a University Daily Kansan report said he injured it in an intramural basketball game last week.

Also on crutches were center Ryan Cantrell and linebacker Joe Mortensen. Both played through leg injuries late in the '07 season.

¢Up next: Mangino joked that while Saturday was a night to reflect on the 2007 season, it would be one of the last times, with preparation for 2008 coming up quickly.

KU's first spring practice will be Wednesday. The Jayhawks will work out 15 times over the next month and finish with the spring game on April 12.