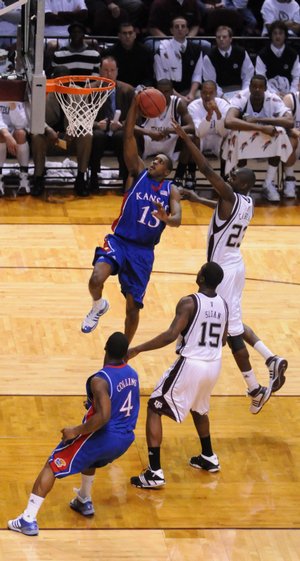 Nice work fellas. 4 in a row, must feel nice.

Good job guys! Playing a lot better this last week. This team really needs to at least make the final four though. If they don't make it the rumors will start to fly around about Self.

I want to be the first one on this page not to give props.

R Greene, there's a typo in a Cole quote more than half way down.

"The senior have won four. I hope I can squeeze a few more out of my years. It's hopefully one of many."

If I was on your timeline I would make mistakes similar to yours on "senior(s)" in that quote, though.. In fact, I wish there was a better way to report typos to you guys, because I feel like an ass doing it this way.

No disrespect, you do a great job.

4-peat. How sweet it is. This is a very successful group. I hate to see this season end.

Let's make sure the Longhorns don't get the tourney trophy.

Congrats Jayhawks! You have made us proud and happy. Thanks to the Seniors also, we will miss you all! Arthur, I hope you stay! Chalmers, you better not be thinking about leaving lol! Collins the spark, thanks. Thanks to all our team, it is truly a team that I am proud of, not only the winning, but how you conduct yourselves! AWESOME!

Super, super article, Gary. Great season Jayhawks and everyone of you guys deserve lifting the league trophy. Gee, I know that lifting a few more and cutting down some nets are in order. Great season Coach Self, Coach Manning and every assistant, team trainer and manager. Let's roll into KC and pick up another trophy. ROCK CHALK, JAYHAWKS!!!

yahweh, were you gonna let this one slide?

I think the word three really is better with 3-e's

Winning the past 4 conference titles is great. Of course this year we have to thank Texas Tech for beating Texas late in the season, and was it two years ago that A&M beat them late in the season to put us into a tie with the horns? Back when they had Buckman, Aldridge, and Gibson. And Abrams was already deadly even as a freshman. They beat us bad in Austin in the regular season and we got paybacks in Dallas in the Championship. There's a good chance we'll get the rematch at the Sprint Center!

I much as I want the conference crown outright, I think I want to be the 2-seed. That way, if OSU ends up the 7-seed, KU can play them, then KSU, then UT in the championship, thereby avenging all three regular season losses. Now that would be a nice conference tourney.

"I want to be the first one on this page not to give props."

I like your idea, okjhok. If it did work out that way, it would be another tie-in to '88 (with avenging the home losses to KSU, Duke and OU).

lets be honest and give props where there do.......Sherron Collins has been playing like a man possessed and totally and utterly controlled the basketball game on both ends.....he is starting to look like the collins from last year......our " X" factor if you will......we are going to be a force to be reckoned with...

Well, I want to be the second one on her that doesnt give any props. I hope you can all respect me for my disrespect.

I dont think the one or two seed really matters much either way. If we are the 2, Kansas State is not beating us in KC. It looks like to me that we are going to have another Texas Kansas thriller!

Self said "We will not have a chance to go far in the postseason without better performance from the perimeter."

I am so happy he's focused on that now that our inside game is humming along nicely. Because he is exactly right teams will pack it in on us so it's Key we are able to score and score consistently from beyond the arch. Chalmers, Rush, Collins and Robinson with some added help from Case will be key to our journey. I am confident if we keep Arthur and Jackson from shooting 3's (JOKE) (I cringe when I see them shooting with their foot on the line) we have a great chance to score and score plenty from outside. Chalmers and Rush are the leaders from beyond the arch and we need them to step up and knock them down: Rock Chalk !!!

When Sporting News rated the top programs in the country, the biggest factor they looked for was Conference Championships, not National Championships. To win the conference means great overall play, day in and day out. I want to thank the seniors and the entire team for a great conference season. Now, let's see how far we can get over the next month. Rock Chalk, Jayhawk!