Kansas University basketball coach Bill Self talks with campers. Self spoke at his second camp of the summer Tuesday in Horejsi Center. 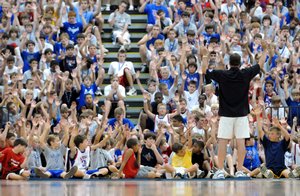 Bill Self watches a show of hands after asking his campers if they thought KU had a good team this last season. Self answered questions from the campers and talked about what he looks for when he prepares to recruit a player Tuesday, June 17, 2008 at the Horejsi Center.

It's easy for Kansas University sophomore Tyrel Reed to relate to the 1,000 or so youths in town for Bill Self's basketball camp.

Reed made the short trip from Burlington many times during his grade school and high school years.

"Probably six years - one when coach Self was here, the rest when coach (Roy) Williams was here," Reed said Tuesday.

"It's good for young kids, teaching them the game and having a good time. It's just a good camp," added Reed, who years ago never imagined he'd win a national championship at KU.

"I'm truly blessed to be in this position. Hopefully it just keeps getting better."

The 6-foot-3 Reed, who played sparingly his freshman season, is one of just four returning scholarship players from KU's national-title team.

Chalmers on Sunday made his departure official, indicating he would sign with an agent and remain in the June 26 draft.

"We all knew Mario had a good opportunity to pursue his career in the league. He's going to be a great player there," Reed said. "We've known we could be losing all those players. We've been prepared for it.

"I think there's always (playing) time available no matter who is here. I think it's who is playing well at the time. You just have to show people (coaches) who is the best. I think coach Self will determine that."

Self said Reed should consider himself a prime possibility for meaningful minutes during the 2008-09 season.

"He is getting better. He and Brady (Morningstar) have both gotten a lot better," Self said. "Cole (Aldrich) and Sherron (Collins) will be two of the better returning guys in the league. Tyrel and Brady will need to step up and be players for us. Both have that window of opportunity to step in and contribute. Nobody will out-work Tyrel, so I anticipate him being right in the mix."

"Tyshawn is very athletic. Tyrone is a great defender. I think they'll be fine," Reed said. "It'll be an adjustment like any player has, but with time, they'll be fine."

¢Little en route: Self is expecting the arrival of incoming guard/forward Mario Little today. Little, 6-foot-5 from Chipola Community College, completed his final course at the Florida school and likely will play in this afternoon's camp game between current and ex-Jayhawks. Self believes twins Marcus and Markieff Morris of Philadelphia will be in town within a couple weeks. Self does not expect the duo to have problems attaining collegiate eligibility.

¢Tickets to cost $55 apiece: A KU men's basketball ticket will cost $55 during the 2008-09 season, an increase of $10 per ticket from last season. Parking will be $346 total or $17.30 per game, compared to $15 a game last year. Parking prices are set by KU's parking department, not the athletic department.

"We have the premier basketball program in the country, and we want to keep it that way," KU associate athletic director Jim Marchiony said, asked about the price increase. "Not only do we have a great basketball program, but we have many exciting things about to happen to Allen Fieldhouse and our facilities, and it's important for us to give our fans their money's worth. We think we've done that and will continue to do that."

¢Macneill leaving KU: Brandon Macneill, who has worked for KU's athletic department since October 2003, has accepted a job as senior associate AD at his alma mater, Tulane University.

Macneill has been KU's associate AD for administration since July 2004. He started as KU assistant AD for strategic planning in 2003.

"I think it is something he is ready for. He has been a terrific member of our staff. He's worked for me for almost five years. I've given him more responsibility than I've given any employee ever. He's handled it terrifically," Marchiony said.

¢Collins update: Sherron Collins, who is likely to appeal, currently is responsible for a $75,000 judgment in a civil suit. One is left to wonder how a college junior might come up with $75,000.

"How any student reacts to a judgment like this is based on what the final judgment is, how the decision is rendered. We are a long way from that. It is way premature to even discuss that," Marchiony said.

He was asked if students may take out loans to pay for such judgments.

"Any student can get a loan from someone through a normal process," Marchiony said. "It is way too early to project what might happen."

In some cases, the legal system can seize the property of individuals unable to pay large judgments.

Marchiony said the university can not pay Collins' legal fees. The athlete has to come up with any attorney fees on his own.

As to whether KU would work with Collins' legal representation, Marchiony said: "Again, it's up to his attorney, whether he or she wants to involve somebody from Kansas Athletics in this process."

¢Langford to Raptors camp: Former KU guard Keith Langford, who will play NBA summer league ball for Chicago and Denver in July, will attend free-agent camp of the Toronto Raptors this weekend.

¢NBA Draft bonanza: KU coach Self on Tuesday said he thought five Jayhawks would be selected in next week's NBA Draft. Rush, Chalmers and Arthur are said to be locks for Round One. He said Sasha Kaun and Darnell Jackson are likely second-round picks. He did not discount the possibility of Russell Robinson being selected by a team looking point guard from a winning background.

Assuming you get to go to KC to watch the CBE tourney that is. :-) Either way enjoy! I know I will.

Cheap a$$. If you expect the best b-ball team in the country then you better expect to pay for it too. Go ahead and give up seats because somebody will buy them.

And the most expensive ticket in the country, just got pricier. I was wavering on whether or not to renew my season tickets, but the athletic department solved my dilemma for me. At $55 a pop, I don't think I can "get my money's worth," as Marchiony put it, if we continue to schedule likes of Loyola, E. Washington, UMKC etc.

Nutflush - While I agree that tickets are expensive, I'd contend you would indeed get your money's worth. We play at least 5 teams that were part of March Madness and perhaps 6 if we see Syracuse instead of Florida. RENEW!!! :-)Kent State, UMKC, Washington (in K.C.), Syracuse or Florida (in K.C.), Belmont, UMass (in K.C.), Temple, at Arizona, Tennessee, at Michigan State.

Go ahead, don't renew, show the athletic department that you mean business....enough is enough! They are going to have a hard time finding folks to pay 55 dollars a game to watch a National Power play in a venue like Allen Fieldhouse. If you end of regreting your decision, don't worry about it, just give them a call and buy season tickets for the following year...no problem.

Good to know how successful KU fans are. To them, or at least some, $55 is a mere bagatelle. Amateur athletics just got less amateur. What do they charge for professional games in Kansas City? We in the country don't know about uptown prices.

Nutflush...move into a cheaper studio apartment or get a roommate so you can afford the tickets. Only then will you truly prove your KU fanhood...

It's simple economics. The price of KU bball tickets is just like any other market. The price will be set at what they feel the market will bear. If it turns out they can't sell tickets at that price, they'll be lowered. I don't think they'll have any problem selling them. Don't bitch at the AD for raising ticket prices. While Marchiony does seem to be an ass most of the time and shouldn't be allowed to speak for the dept any longer, he's doing what he's paid to do, make money for the KUAD.

I have to agree that the $55 price is pretty steep. I wonder if next year's team does not do as well as this past season's team, will the AD drop the tickets down to $50 or $45 for 2009-2010?Also, I would like to use this opportunity to congratulate former Jayhawk Paul Pierce for being named the 2008 NBA Finals MOP!

Whatever happened to "Pay Bill Self; He's worth it!"?Well they're getting ready to.

Sherron is going to need a loan...Julian, Brandon, Mario, Darrell, Darnell, and Sasha might just be able to pitch in and help him out. Not a bad list of friends to have if you need some temporary financial assistance.

We're also helping finance the new football fields and improvements to the stadium and Allen Fieldhouse.

Eddie's right. Fun walking around with National Championship shirts on, huh? You get what you pay for, retards. Don't like the price? Don't renew. Sit home, watch it on television, eat your tv dinners and brag to your friends about how you're a HUGE KU fan, (you just don't go to any of the games).

hawkfan4life - do you want sherron in more trouble than he already is? If those former players give him money KU will be penalized big time.

Jus because I dont want to drop 2400 on tickets doesnt make me less of a fan. Ive seen over 150 games in AFH and love my alma mater. However, as a 24 year old, that is just too much money to spend on tickets to watch what is going to be a 7-10 loss team next year. I know for a fact that Im not the only one that wont renew because of the price. Dont worry corporations will surely buy up the seats and they will be used by fans who dont give a crap!

So can Sherron just pay this thing off and be done with it? Maybe those NBA buddies can help him out. He'll be able to repay them in a year anyway. Is it really an NCAA violation? Probably.Paul Pierce is the MAN!!

KUFan90...Bagatelle means something of little significance.

Looks like our non-con schedule just got even more interesting with Tenn. coming to AFH. Clash of the newbies!http://www.sportsline.com/collegebasketball/story/10868809"Emmanuel Negedu's pledge also pushes Tennessee's recruiting class solidly into the top 10 considering he's the fourth Rivals.com top 70 prospect to commit to UT. The best of the group is McDonald's All-American Scotty Hopson, who will start in the backcourt beside junior college standout Bobby Maze for a team that should win the SEC and could advance to the Final Four."

Nutflush, so what you are saying is that you would spend the extra $200 if you thought we were going to be good. but it's not worth it, as you put it "to spend on tickets to watch what is going to be a 7-10 loss team next year."Now thats a real fan.Or are you saying that the extra $200 is too much to spend to have the privilege to see the greatest team on earth. regardless of what you think their record will be.