Judgment and Petition against Sherron Collins 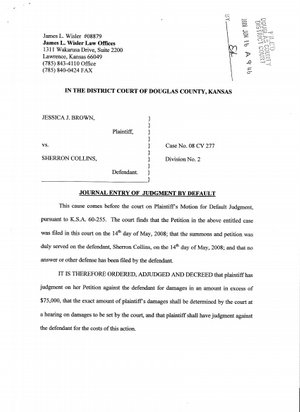 Possible evidence in an assault investigation involving a star Kansas University basketball player is currently being tested by the Kansas Bureau of Investigation.

The KU Public Safety Office sent the evidence to the KBI lab in Topeka on Oct. 22, 2007, officials with the two agencies said. The testing was requested because KU police were investigating an allegation a 35-year-old woman made against KU guard Sherron Collins, 21.

This is the second time the evidence has been tested by the KBI, director Robert Blecha said. The same evidence was sent for testing in June 2007. It took only a month to complete that testing and return the evidence to KU, Blecha said.

In October KU sent the evidence back with a request for a different type of examination, Blecha said. It has taken longer to process the evidence this time because of a backlog of cases to be tested, a situation made worse because of remodeling the laboratory, he said.

"The last few months we've been remodeling and refurbishing the lab area in the basement here," he said. "We've had to move equipment and give ourselves some room to work."

Neither KU police nor Blecha would say specifically what type of testing had been done or is being done now.

Blecha said he didn't know when the results of the latest test will be known.

"They do a batch of examinations at the same time," he said. "It's not going to be months and months."

The investigation was started more than a year ago when Jessica J. Brown, then an employee at Jayhawker Towers where Collins lived, told KU police Collins exposed himself and rubbed against her in an elevator. Collins has denied the allegation. No criminal charges have been filed.

Collins, however, failed to respond to the lawsuit filed against him in the 20 days after it was filed May 14 in Douglas County District Court. On Monday a judge signed a journal entry granting "judgment by default" because of Collins' lack of response. A hearing to establish the amount of damages to be awarded in excess of $75,000 is set for July 8.

Collins said earlier this week he did not know what his legal responsibilities were under a civil lawsuit. He said he will work to correct the matter and to "prove that the allegation is not true."

Good grief. In the 70s we called this flirting. And what kind of evidence would there be if someone did rub up against her for all of 10 seconds? A wrinkled shirt? A curly hair? Come on sis, get a grip. If that's all there is, I smell a golddigger.

This is really a mess. Incompetent officials, crass comments by KU fans, half-arse reporting by the LJW, Toto I think we're in Kansas.

It certainly sounds like they didn't get they results they were looking for on the first test. I'd the say the timeline on this thing just points to how inefficient our law enforcement agencies are at doing their job...

Good question, NH.Also, from "Civil suit hits Collins for $75K" http://www2.kusports.com/news/2008/jun/16/judge_rules_against_ku_basketballs_collins_womans_/?mens_basketball"The statute of limitations for filing criminal charges is five years. The civil lawsuit will not have any effect on the district attorney's office's decision whether to prosecute, Branson said."-----------------------------------They can basically take their sweet time and drag this out four more years if they would like.

thank you all for exposing, err ummm expressing your opinions and letting your true feelings 'all hang out'. in the end she will be getting her damages money...maybe not all she wants but some and sherron will NEVER forget to consult a lawyer right away again. He will have to face this, and if he is not guilty hopefully a jury and judge will see that. KBI...remodeling? Is Ty Pennington making them a secret room too?

What kind of test could it be?

What a clown act by the KBI. I hope we don't have any real crimes with real criminals that aren't getting investigated.

nettiiepie, you need psychiatric help. With that attitude you are a danger to those around you. Get help now.

Could it be an analysis of a security camera? Like the R. Kelly video. NOT GUILTY!!!

This whole thing stinks, period. I lived in the towers, very short elevator ride. I smell gold digger also. Put a fork in it, it is done, or at least I surely hope!

Crimany nettiepie. Taking your penis out and forcibly rubbing it against a stranger is what you called flirting? I imagine you called forcibly having sex with someone "dating." Your exes are some lucky folks.

Which offseason was worse? The 88 offseason or this one? Thank God For Todd

Someone please help me understand the timeline here. Incident occured May 2007 and it took the KU Public Safety Office until October (5-6 months) to send the evidence to the KBI? Given that this happened in an elevator (max 10 second ride) and presumably there were only two people on that elevator, how much evidence would there be? And why would it take 5-6 months to send it to Topeka? And given the nature of the allegations, what would they test for 2nd time around that was missed the first time? I'm no forensics expert but this timeline seems a bit long to me.

I just love reading everyone's thoughts on such crazy topics. I'm sure Sherron did something. The question is did he cross the line? I don't see any sign that KBI has any evidence to prove anything. If they are "batch processing" evidence, it's not video surveillance. It's got to be biological or fabirc or something like that. Even so, how long cna it take. Gil Grissom's crew would have all the evednce collected, processed, and the case closed before their shift ended - and we know that everything on TV is absolutely true.

Klineisanazi and Peter56321: Chill. I'm just sayin' that guys that did that in the 70s were passed off as stupid a-holes. And yes we have laws now because of what people did in the 70s this is true. But I've seen way too many 30 somethings crying harassment when a co-worker smiles at them or looks their direction too long. Collins was dumb for not addressing the charges immediately. And if he DID do the dirty deeds you are imagining, he is a stupid a-hole. But.... if there was a criminal act, then there is no excuse for not having charges filed immediately. I choose to believe there is no evidence and no case.