Wright puts on a show

Bill Self basketball campers were treated to a start-studded pick-up game today. Seven KU alumni players returned to battle the current team with nothing more than bragging rights on the line. 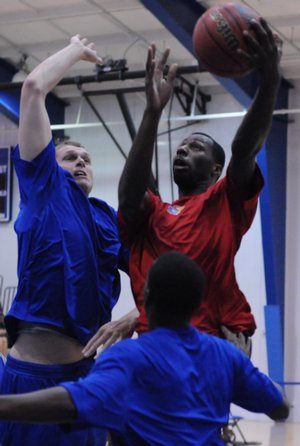 Julian Wright dribbled at the top of the key, pump-faked Kansas University sophomore center Cole Aldrich, then hit the lane for a vicious slam dunk.

Wright also finished a one-handed lob dunk from Bradford and two-handed a slam that rocked the rim following a feed from Jeff Hawkins.

"That's God-given ability there," Wright said after scoring a game-high 22 points off 10-of-19 shooting with six rebounds.

Wright thanked the heavens above for his health after one dunk try went awry.

Former KU guard Bradford, who played in France last season, bounced the basketball hard off the court in the direction of Wright, who couldn't grab the breakaway pass and fell hard after the acrobatic attempt failed.

"It seemed like I landed real bad. That's just how I am, just get back up," Wright said. "I wanted to help the campers have fun."

They stomped their feet on the bleachers in approval watching Wright run the court.

"It's really tough," the 6-foot-11, 240-pound Aldrich said of guarding Wright. "Julian is so athletic. He is so good. That's why he was a lottery pick last year.

"He's difficult to guard on the perimeter. He's not a banger inside, but likes to get you off that dribble. He definitely got me off the dribble."

Aldrich answered with eight points off 4-of-7 shooting and pulled down 10 rebounds for the current Jayhawks, who were led by incoming freshmen Travis Releford and Quintrell Thomas, who scored 13 points apiece, and sophomore Brady Morningstar, who had 12.

"We're upset. We don't like losing, whether it be the alumni game or even when we're playing little kids in the camp," Aldrich said. "We'll make it a game, but you always try to get that 'W' in the end. They were good, though. They've got some talent on that team."

Notably Wright and Keith Langford, KU's sixth-leading scorer of all time, who scored 21 points off 8-of-13 shooting, including a pair of three-point buckets.

"Watching Keith Langford play was crazy. He's a great player, so I can learn a lot from him," said KU freshman guard Tyshawn Taylor, who had six points, two rebounds and an assist while trying to slow the 6-4 Italian League sensation's drives to the hoop.

"Just how he (Langford) moves, what he does. He does things to create space to get the shots he does. I'll try to practice that to make my game more well-rounded," added the 6-3 Taylor.

"It's fun, but we weren't planning to lose. It was like my career. I was around great guys who made me look good. It happened again today. I had Keith and Aaron pass me the ball, Nick Bradford (seven points) and Jeff (Hawkins, 13)."

Of withstanding the younger Jayhawks, who actually led, 41-37, at halftime, Lee said: "There was nothing to talk about. We were doing it before they were doing it. You've got to put that in perspective. It got a little serious. Brady made some plays for them. Cole rebounded, and Quintrell, too."

"They're really good," Wright said of the 2008-09 Jayhawks, who played without Sherron Collins, who is still recovering from offseason knee surgery, and Tyrone Appleton, who was working a camp in Kansas City.

Marcus and Markieff Morris and Mario Little are not entered in first semester of summer school.

"I played pick-up last night," Wright said. "Quintrell is looking good. Tyshawn sees a lot on the court. He knows when to be aggressive. He is an attacker and a slasher. He finds his creases and attacks and has good play-making ability."

Another attack-minded player is Roeland Park Miege's Releford, whose six baskets in seven attempts all came off moves to the hoop.

"This was a good experience today," Taylor said. "It gets me ready for what I'm about to experience in college. It's my first time playing with my teammates (in a game setting). It's a good start."

woodhawk - from the KU basketball notebook article posted today:Twin forwards Marcus and Markieff Morris are working on gaining eligibility back home in Philadelphia."The twins : we hope to get some favorable news where they'll get here in the next couple of weeks," Self said. "They still have to tighten up a couple of issues, classes. We don't anticipate a problem."

Great article, kushawk. As I said in a post the other day, Rush's terrible injury is really what set so many good things in motion. Without that, we (probably) don't make it to the championship, and Chalmers doesn't get a chance to be the hero. Rush wouldn't be selected as high as he would this year (in last year's draft), Arthur may not be as sought after, Chalmers probably doesn't go at all, and we (maybe) don't have the possiblity of landing the great recruits for 2009. All "what if's," but it all started, ironically, with that awful injury (well, that and Rush's ridiculous work ethic and drive... that probably played a part...).

Releford is the best news here by far.

No problem. That'd be Oct. 17 this year.Trust me, JuJu doesn't regret leaving. Like LA says, he is making more than a mill this year and next and more than 2 mill in year three. Yes money does mean happiness in this day and age.

Nice to see that the freshman held their own yesterday.

Quintrell, 11 boards, nice! However, he might have been the recipient of all of those boards by having Aldrich in there boxing out around the basket...If Self plays a smaller line-up which he might be forced to do much next season if the twins fail to show, sounds like Quintrell might end up playing as one of the "bigs" or often in the middle, especially if really can pull down boards like last night. Looks like his play and size might resemble Alonzo Jamison...

Nice to see Wright again. Bet he regrets not stayin' another year.

Any more word on the Morris twins' eligibility? Have they qualified yet or when can we expect them to?

when is late night?

Late Night is the Friday closest to Oct. 15. It's the same every year.

I keep saying that I think Releford is underrated. I believe he's going to surprise a lot of people (none on this comment board, of course).

I have a feeling that Quintrell Thomas is going to make us very happy over the next few years.

i like hearing that releford is attacking the hoop. that's something that we missed with collins not at 100% and JuJu playing in the association this past season. not that we missed much because they've all got rings - but when rush would attack, it opened up our perimeter game, and hopefully releford and a healthy collins can keep defenses honest.

what a great opportunity for these young guys to play together against such great talent and Wright, Langford, Miles, Bradford, and the rest. Definitely impressive that they gave those guys a run for their money. I like what I'm hearing about these freshman.

Rock to the Chalk

Even more than his bank account, there is no guarantee that his staying means a national championship. Different guys would have had different roles. Does Darnell Jackson develop the way that he did? What about Shady? Bringing Julian back changes that team, and even if that makes them better on paper, does that automatically make them better in March? I think everyone would agree that nothing is automatic in college basketball. Plus, Julian is playing with the best PG on the planet right now, getting paid to do something he loves doing, and he's on a winning team.

Nice points. I personally agree that the overall team blossomed with well-rounded depth AFTER Julian left, as that directly allowed the development of DJackson and Shady. It also allowed the guards and Mr. Rush to do more of their "thing", as I still believe we had the #1 backcourt by late-regular season. There is frankly very little comparison between the 06-07 Jayhawks and the 07-08 team, as everyone got better, FT% better, Rush better in every aspect (huge factor by itself). Only RussRob seemed to be plateaued (albeit at a very high level), as his scoring did not change much, but then he was not required to score--he did everything else stellar. The consummate team player, as they all turned out to be. What a chapter for KU ball...

Very very true justanotherfan. There are no guarantees KU would have won it all witih JuJu.I mean KU only lost 3 games all year without him.That's about as good a season as is possible in college basketball nowadays. Three measley losses. Not bad.