former Kansas running back Brandon McAnderson (35) busts through the Texas A&M defense for a touchdown in this Oct. 27, 2007 file photo from College Station, Texas. After a short stint with the Rams as a free agent before getting cut, McAnderson worked out with Oakland, but is still looking for work in professional football. 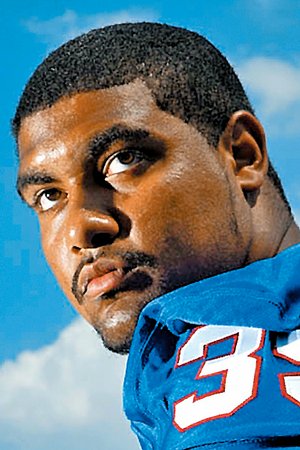 Post-graduate life has not been overly kind to Brandon McAnderson.

Since piecing together a senior season in which he compiled 1,125 rushing yards and 16 touchdowns for the Orange Bowl-champion Jayhawks, the former Kansas University running back and Lawrence High product has experienced a collection of bumps, bruises, disappointments and near-misses in his quest to make an NFL roster.

"It's been interesting," said McAnderson during a phone interview last week. "It's not exactly what I expected. But it's diversity, and it's life."

His journey began last April, when he watched as team after team passed him by in the 2008 NFL Draft. A bruising rusher who had displayed a knack for finding the end zone during his career as a Jayhawk, McAnderson had hoped to be one of the 252 players selected. He wasn't. But within an hour after the draft officially ended, he had agreed to a free-agent deal with the St. Louis Rams.

So he packed his bags, shaking off the disappointment of going undrafted, and set his sights on beginning his NFL career.

From the start, McAnderson encountered obstacles. Playing with an injured ankle - sustained while working out following the 2007 season - B-Mac found himself severely limited and struggled to stay afloat against some of the best athletes in the country.

Eventually, he was released from the team in May.

He returned to Lawrence with a shattered psyche.

His motivation plummeted, and as a result, his weight did the opposite. For the first time in his career, he began seriously to question his abilities - and he braced for the possibility that his football career might've run its course.

"I'm not one to get down on myself," says McAnderson, who before this year had never dealt with a significant injury. "But I wondered, you know, is it the injury or is it me?"

Then, last month, the Oakland Raiders called and offered him the chance to work out for them. There was no guarantee of a contract, but it was another chance. He did his best to work back into football shape, and in mid-June, he and a couple other running back prospects were put through a collection of drills in California.

This time around, things couldn't have gone much better. McAnderson moved well, ran well, caught well. He made plays, by his estimation, that his competitors didn't. Though not 100-percent, the ankle held up nicely, and for the first time in months, McAnderson felt like himself again.

"I got back to playing like me," he said.

After the workout, a Raiders representative met with him in the locker room. He told McAnderson that the team liked his abilities and his feet and what he brought to the table.

Then he said the team would be going in another direction.

McAnderson returned from Oakland and made a decision: It was time to get practical. With a new wife, Alejandra, to whom he was married two weeks ago in Lawrence, he now has a family to support. He is in the process of searching for a 9-to-5 job - "to put this four-and-a-half-year degree to use."

He has a lead on a position as a salesman for a life insurance company run by the friend of a relative. It has potential, he says, and the company has a reputation for taking on recent college graduates.

"At this point, I've got to try to support myself and my wife," McAnderson said. "I've got to go back to being a regular person, just like everyone else. Trying to earn a living."

Funny thing, though. Since returning from Oakland last month, there's this thought that he hasn't been able to push out of his mind. It's there in the mornings, when he wakes up, and at night, too. Tugging at him.

He believes he was the best player on the field that day in Oakland. Knows it in his heart.

Which is why, each morning, he wakes up, throws on some workout clothes, and goes running - usually with his father, Ramon, yelling in his ear. It's why he spends his afternoons working out at Lawrence High School - the place where his NFL ambitions began to form as a local prep star - and at Kansas University - where they began to blossom.

Quick feet, GREAT vision, power and the ability to catch and run. I've said it before, he reminds me of Pro Bowler Kimble Anders. Smooth power. I can't believe nobody is giving him a shot.

This is a well written article.Please continue to keep us informed of his progress. I know there are many of us interested to see how it works out for the big B-Mac.Good luck Brandon.

Just what I was thinking. Why not Canada?

I thought he could have played for the Chiefs last year. That's not saying much, but I think he has the talent to make it. I really do. I remember seeing Harry Sydney working at a Kwik Shop in Lawrence after his KU days were over. He kept giving it a shot and ended up with a few Super Bowl rings from playing for San Francisco. I think Brandon can be a similar story. There's a team out there that can use him, and they'll consider themselves lucky after a couple of years because the kid's a winner. Good luck, Brandon!

Hey Toto_the_great : The CFL teams have a limitation on the number of "import" players (ie Yanks) that they can have on their roster (I am sure that his former team mate Cornish can school BMAC on the rules); however, they are almost in training camp if not already. Having lived in Canada, I think that it would be a good place for him to park for now and show his stock to the NFL. He obviously can run over folks, but he can block and catch the ball in what is a pass oriented league.

I wish him well, he was amazing this past year. I honestly wasn't sure going into last season how our running game would do without Cornish, but B-Mac and Sharpe were amazing. I just hope Sharpe and Crawford can at least come remotely close to what our team accomplished on the ground last season.Good luck to you B-Mac!

hang in there BMac your time will come

I've posted time after time that B-Mac is a great winning football player. He can help a team by making winning type plays. It might be a block, special teams tackle, anything. The guy is a football player and he will be in the right place at the right time when a team needs him to be. Hang in the B-Mac. I like your practical thinking but you are too young to hang up the cleats. Do exactly what you are doing. Stay practical on the career path but keep training and eating like you are playing. Have your agent watching for Running Back injuries and spots, because a door will open and you want to be ready to go through it. You are a good enough player. You just have to stay hungry. It will be a long road as a NFL free agent but it can be worth it and you will always know either way that you tried and gave it your best shot. I'm betting on you!

Thank goodness he got a degree. He'll need to use it. Very, very few athletes make a career out the sport.

What about the AFL? How are the CFL and AFL rosters filled... draft or free-agency?

B-Mac you are the man! We are all pulling for you!

Forgot to mention great balance. And he does one thing a little better than Kimble did. He keeps his pad level low. Incredibly low. As much as Scouts talk about pad level, he should've gained a contract on this alone. Check it out.http://www.youtube.com/watch?v=Tx1VdbuHb18God! He just smoked the Aggies. What a show. I know we have a stable. But we are really going to miss Bmac this year.

We're all pulling for you, Bmac!

B-Mac would have probably been the No. 1 pick if he had gone to Mizzou.

B-Mac sucks. There I said it.

I am sure GoBadgers and BillJonesSr feel better having made their silly posts.