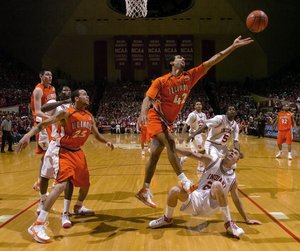 Illinois forward Brian Randle (42) stretches for a rebound over Indiana forward Lance Stemler (22) during the second half of Indiana's 62-58 victory. The Hoosiers won Sunday in Bloomington, Ind.

Bloomington, Ind. — Eric Gordon and No. 10 Indiana stuck it to Illinois again.

The high-scoring freshman, who reneged on an oral commitment with the Illini and signed instead with the Hoosiers, had 17 points and Indiana rallied from a seven-point deficit in the second half to beat Illinois, 62-58, Sunday.

It was Indiana's 10th straight victory and 27th in a row at home.

Big Ten rebounding leader D.J. White, coming off 21 points and a career-high 22 rebounds in a victory at Michigan on Tuesday, added 15 points and 10 boards, and Armon Bassett had all 11 of his points in the second half for the Hoosiers (14-1, 3-0).

Duke held the Cavaliers, a 40-percent-shooting team from long range, to just 4-of-14 shooting from beyond the arc.

Sean Singletary scored 18 points and Calvin Baker added 13 for Virginia (10-4, 0-1), which was denied its first victory at Cameron Indoor Stadium since a double-overtime victory in 1995. Its four-game winning streak against ranked teams also was snapped.

South Kingstown, R.I. - Will Daniels matched a season-high with 28 points, and Jimmy Baron hit a fadeaway jump shot with 3.2 seconds left to give Rhode Island a come-from-behind win. Baron's shot put Rhode Island (15-2, 1-1 Atlantic 10 Conference) up by one point with 3.2 seconds left, and Kahiem Seawwright hit a foul shot to seal the win in the Rams' conference home opener.