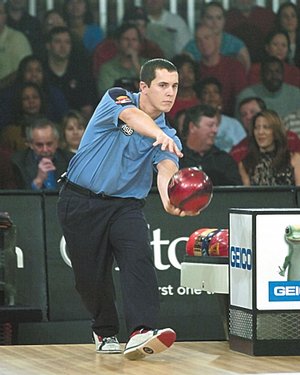 In just a few short months, former Kansas University bowler Rhino Page has gone from hoping to be a part of the Professional Bowlers Association tour to nearly taking his first title in December at Spartanburg, S.C.

Page, 24, came within 10 pins of defeating PBA veteran Parker Bohn III at the Spartanburg Classic, the tour's eighth event of the season.

And Sunday, he came close again, rolling into the finals of the Earl Anthony Medford Classic in Medford, Ore. In the championship, he fell to Wes Malott, 255 pins to 193 for another runner-up finish.

"It's been a great experience so far," said Page, a California native and current Topeka resident. "It's great being able to play in these events and compete with bowlers like these."

Although joining the PBA circuit was something Page had considered seriously for some time, it was a new rule in the amateur ranks that helped make the decision for him.

Prior to his entry into the PBA, Page made a living hitting the amateur circuit at the MegaBucks tournaments in Las Vegas. Those tournaments - held on dates such as the Super Bowl and the Fourth of July - are where many amateurs go to make their money for the year. Page, in fact, paid for his tuition at KU many times through his winnings in Las Vegas. It was there that Page decided to go on tour.

"They made this rule in July that no international players or Team USA members (of which Page is a member) could play at the MegaBucks tournament," Page said. "So I was sitting around trying to figure out what I was going to do."

What he did was join the PBA tour.

Since August and through Sunday, Page has been on an outstanding charge through the opening half of his first tour season.

He has qualified for three championship rounds, becoming the first rookie since Mike Durbin in 1967 to do so. As a result, Page is considered the front-runner for the PBA Rookie of the Year Award.

That success has been nice for Page, but ultimately there is a more coveted goal.

"The real goal for me is to get exemption," Page said. "Exempt bowlers automatically have a spot in the semifinals of tournaments, not to mention they get a paycheck."

Page is a non-exempt member of the PBA Tour, which means he isn't guaranteed a spot in any tournament. Instead, he must fight his way through each event's qualifying rounds.

Despite the extra work he has had to do as a non-exempt bowler, Page has enjoyed just about every aspect of life on the PBA Tour. He has become acquainted with some of the tour's most well-known bowlers and considers Bohn III as one of his mentors. He has also learned to enjoy the travel - albeit traveling by car from his Topeka home - to bowler-friendly places such as Spartanburg.

"Some of those places are just crazy about us," Page said. "They're just small towns in a lot of cases, but they really love us there."

Contratulations Rhino. I enjoyed bowling against you at Royal Crest, am proud of the fact that you helped KU to a National Championship in bowling, and wish you a lot of success with your professional career. You have made a huge splash on the PBA Tour. Keep up the good work; I look forward to following your career.

Since when is bowling a sport? If you can do it better drunk than sober, it's not a sport.

The "sport" factors in when you try and go bowl a consistently high average. the need to reproduce the same mechanics each and every time takes extreme concentration and physical ability, similar to golf but without the course changing every frame.

Besides, who cares as long as you can make a living at it?

Maybe J-Wright can join Rhino on Tour someday... at this pace it won't be long since JW's NBA career is having a STELLAR takeoff!!!

Although I don't see Poker on this list, I am sure that you have watched it on ESPN.

I love bowling! And wanted to see what my avatar looked like.

Congrats on the national title at KU, and on the success in the PBA! What does it take to get exemption? Do you have to win so many tournaments? Or make the finals so many times in a row, or what?

oh wow, just noticed that this is from over two years ago. Haha, I'm a little late.