By By Nick Krug - nkrug@ljworld.com 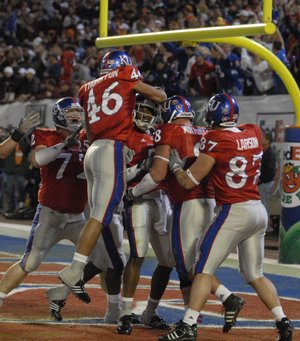 "Behind the Lens" is a weekly look at photography, written by Journal-World staff photographers. Have an idea for the column? Contact Thad Allender, photo director, at 832-6359 or send e-mail to tallender@ljworld.com.

After all the whooping, hollering and celebration had ceased following the Jayhawks' Orange Bowl victory, 1,075 was the magic number of total photos I shot by the game's end.

I've been accused before of having a severe case of the lead finger at times. Definition: A football photographer who recklessly and shamelessly hammers the camera shutter during a big play - not a technique I recommend, by the way. Greater results are yielded when you can concentrate on capturing that one image rather than machine-gunning the entire play start to finish. However, we all give way to temptation from time to time.

Out of the aforementioned grand total of images, 39 were transmitted back to the Journal-World via a high-speed Internet line from Dolphin Stadium. Eight photos saw the light of day in the Jan. 4 print edition. With an average shutter speed of 1/500 of a second, multiplied by the 39 total images sent, my employer received less than two-tenths of a second of game coverage from yours truly. This is slightly less time than it takes the human eye to blink. But who's counting?

Let's chalk up the high image count to the excitability and magnitude of the event. Plus, the game went on forever. What else was I going to do during TV time-outs? As for the nauseating black cloud of nervousness, I usually can't shake that until the second quarter of any game.

Yeah, the Mizzou game at Arrowhead made me a little queasy, but I had two faithful coworkers with me. When you're alone and about to cover the biggest game in KU football history, no trash can is too close for comfort. I paced the sidelines of the field like a madman with an upset stomach for close to an hour before kickoff, checking and testing my gear, checking again and then rechecking because I'd forgotten that I just did a check 10 minutes prior.

Once the game was under way, I burned through 300 images faster than cornerback Aqib Talib could say "NFL." After the bright lights lost their luster and my personal butterflies fluttered away, I was able to take a few deep breaths and convince myself that I've done this before, and so it went.

Looking back, I thought the Orange Bowl had two noticeable differences in comparison to this year's BCS bowl games and to those of years past. Two of the most cliche events in athletic celebration history were absent. One, the Gatorade bath, thanks to the steel-curtain defense of Mark Mangino's supporting staff. Secondly, the glorious trophy hoisting before all the gathered press for no other reason than it just looked ridiculously heavy. Both of which I was poised and ready for but absolutely thankful that they did not occur.

Why, you may ask? Media-proliferated images like these quite often hog all the glory. Meanwhile, the real moments of uncontrollable jubilation you had to work for are cast into the trenches of the sports section. All the healthy competition that exists among photographers, all the self-imposed pressure that keeps us on our toes, it all goes down the drain when the front page picture is spoon-fed to everyone with live television rolling.

So to the Jayhawks and all their fans, my hat goes off. Thanks for keeping it REAL.

Wow! Mr Krug, although you do take excellent photographs, with this article, I think you have proven yourselv a writer far above par. I would love to see more of your written stuff, as well.

Thank you for your well written piece.

So who do we need to write to? What has to happen? When will we get to see some more of your Orange Bowl photos?

I've shot my fair share of VERY AMATEUR sports photography and I certainly appreciate the special skills that are required to get that perfect shot.

I'd love to see more.

I want to see the entire gallery of shots. I am sure there were some really cool and interesting shots that would appeal to different people for different reasons.

Nice piece Nick. I would really like to see the rest of your work from the Orange Bowl. What do we need to do to make that happen.

Voting ends at 11 AM CST today for favorite cheerleader on CBS Sportsline. Here's the link: