Emotional Jackson lifts Jayhawks past BC

Kansas University forward Darnell Jackson swings off the rim after throwing down a dunk. Jackson scored a game-high 25 points in the Jayhawks' 85-60 victory over Boston College on Saturday in Boston.

Ryan Greene comes to you from BC's Conte Forum, where the Jayhawks smashed the Eagles 85-60 Saturday afternoon, led by Darnell Jackson's career-high 25 points. 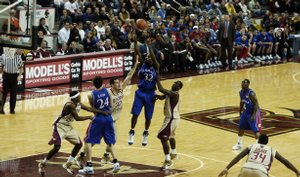 Jayhawks in double figures scoring in the first half

Eagles scoring in the first half

Points from BC starting forwards Tyler Roche and Shamari Spears

KU's combined record in men's and women's basketball and football

Boston — Darnell Jackson stood outside a tunnel of Conte Forum, desperately trying to compose himself before returning to the court at halftime of Saturday's Kansas University-Boston College game.

Jackson, the Jayhawks' 6-foot-8, 250-pound senior forward, sobbed after exploding for 15 points and six rebounds and helping KU to a 47-29 lead en route to an 85-60 blowout victory.

"My grandmother : I can't stop thinking about her," Jackson said, reflecting on the halftime tears - and embrace with teammate Mario Chalmers - after finishing with a career-high 25 points with nine rebounds and two steals.

"I was hugging Mario because I can't stop thinking about her. I was crying. Mario said, 'Do it for her.' It's what I did,'' added Jackson, whose grandmother, Evon, died following complications from a car accident caused by a drunken driver on May 29, 2005.

Chalmers quickly came to the aid of Jackson, who also broke down at last season's Florida game in Las Vegas, site of the car crash.

"Me and D-Block have been through a lot, both of our grandmothers died," Chalmers said. "For me, it's easy (to deal with it). For Darnell : it's hard for him. You could tell he was upset at halftime. His grandmother was his best friend. I stood there and gave him a friendly hug. I told him, 'Everything we do this season is dedicated to your grandmother.'''

Jackson hit six of eight shots the first half and three of four free throws. He scored eight points, while Chalmers had six and Brandon Rush five in a back-breaking 23-4 run that opened a 45-26 lead with 1:21 left before halftime.

Following the emotional halftime, Jackson scored 10 points off 3-of-5 shooting and 4-of-4 free throwing.

His 25 points passed his previous career high of 21 set in this year's season opener against Louisiana-Monroe.

Jackson stressed that he's having a blast this season, but thoughts of his love for his grandma strike him periodically.

KU coach Bill Self says the sky is the limit for Jackson, who has hit the 20-point mark in KU's last two games.

"We've raised his ceiling from where we thought it probably was to where he's playing now," Self said. "He's playing at a high level."

KU's big men were quite effective against BC (10-3). Darrell Arthur had a season-high 22 points with seven rebounds, while Sasha Kaun hit four of six free throws and two of three shots, good for eight points and five rebounds.

"Normally, we're a guard-led team. Today our bigs led us," Self said after Kansas improved to 14-0.

His team did show growth in one area Saturday. KU, which claimed narrow victories over USC (four points) and Georgia Tech (five) in its previous road games, was able to show killer instinct this time.

KU rebuilt the lead back to 25 at 76-51 and won in non-nailbiting fashion this time.

"I don't know if wake-up is the right call," said Self, asked if an on-court yelling match between KU's Chalmers and BC's Rakim Sanders - which preceded the 8-0 surge- snapped the Jayhawks out of their lethargy.

"We went brain-dead on several possessions," Self said. "Even though it wasn't in doubt, it was good to go through that. We didn't finish either road game before this very well. Today it didn't come down to that."

The Jayhawks had three double-digit scorers: Jackson and Arthur, plus Brandon Rush, who had 12 points. BC was led by guard Sanders, who had 21 points. Tyrese Rice, who scored 18 the first half, finished with 20.

KU will next meet Loyola of Maryland at 7 p.m. Tuesday at Allen Fieldhouse.

The improvement this year has been palpable. A week or two ago I mentioned how this team has begun to remind me of the 96-97 team. I don't think they quite have that level of talent, but the "patented Jayhawk run" is slowly becoming just as frequent as it was 11 years ago. I think the difference is this team doesn't quite believe in themselves as strongly as that Jayhawk powerhouse did.

But they're getting there.

Today I saw a team that has grown. Normally they fold that lead with the momentum in the opposition's favor, and end up winning by a handful of points, making all of our hairlines a little shorter in the meantime. But not today. These Hawks are gaining that "killer instinct" more and more with each passing day. Whether or not they reach the 96-97 teams mark of 22 wins in a row, doesn't really concern me. What I do see is a team slowly building confidence everyday toward the ultimate goal, one in which alluded that former KU team. Its a day by day process, and everyday they get a little better.

And a little closer.

What blew my mind away was those idiots who started talkin smack to our boys....that'll teach'em to talk next time.

I have a great feeling about this year's team.....we're looking really really good

I don't think anyone saw Jackson's surge coming quite like this - apparently including the coaches. I doubt if there is a better bunch of guys anywhere. What this group has is more than just talent. Some people call it chemistry. They surely have that. This is more that that. You could see it when they got into their fracas. They like each other and don't care who gets the most points. They just want to win. That is going to be very difficult for any team to beat. They are going to be ready for the big teams when the time comes.

Super article, Gary. The team performance and chemistry with the unselfish play (the passing for assists, "no looks" on the breaks and that DDDDD [team defense with 5Ds]) were simply outstanding. Love that team attitude -- who cares about the points -- we want the nets and the trophies! JAYHAWK BASKETBALL, LOVE IT, WATCH IT!!!

D-Jax is what it's all about! He plays with more heart than any player I can remember! It's why I watch college hoops and NOT the NBA! I've always liked this kid, but to see him explode into this amazingly awesome-to-watch player has been a joy!! He deserves all the accolades he's getting and I'm sure there's more to come for him!! Congrats Darnell and keep it up!!!

Everyone keeps talking about Darnell Jackson and it has been quite sometime since we've had an emotional leader like Darnell. I remember Richard Scott and Alonzo Jamison, but the difference is this kid hits his free throws. I love the fact that Sasha is coming off the bench b/c I think it takes some pressure off him and puts pressure on the opposition. When you start a 6'8" and 6'9" and then you come in with 6'11", it makes the bigs on the other team have to adjust and that sometimes can take an entire half to figure it out or not at all. Two things are going to have to happen for this team to win it all this year. #1) Have just a little luck on our side come tournament time. What I mean by this is not just luck when it comes gametime, but also getting in a decent region where lower seeds don't play in their backyard as well. That will help. #2) I think this is probably more important than the luck factor, but it will be interesting to see how we play against a lessor opponent in a tight low scoring game. Now, I'm not talking about GT or USC this year b/c those games were double digit games where we relaxed and let the opponent back in the game. I'm talking about the games where we don't play well in a low scoring game. The only game I can really think of in the last 3 or 4 years that we won was Southern Illinois last year in the Sweet 16. Those are the games that will test us and those are the games that will dicate wheter or not we can win a National Championship. The UCLA game, even though it was in their backyard, last year was a prime example of that grind it out low scoring game where we didn't capitalize. If we can win that kind of game the sky is the limit.

DJax is awesome, and he inspires me with how far he's come and everything he's gone through to get to this point. I hope, for the sake of the entire team, that this is the year of the Jayhawks! ROCK CHALK JAYHAWK - all the way to San Antonio!

Man the more I see Jackson play it looks like he could do good things in the NBA just my thought.

DJax is quickly becoming my favorite KU player of all time (I'm 34). His excitement, team attitude, and awesome skills that are growing by the game are amazing to watch. I wish Self would have given him more time to develop last year instead of Sasha. I'm not complaining about Self, though, he's done an awesome job of filling Roy's shoes. Speaking of Roy, I'd play them heels anyday this year and be confident of a W.

My favorite all time KU list... sorry, I don't remember much before the 88 championship as I was 13 then.

My favorite KU players of all time: Raef, Collison, Kenny Gregory, Langford, Vaughn, Hinrich, Danny, Wayne, ahhhh forget it.... this is too hard, the list is too long!

Rock Chalk!! How many days until we can pound Mizzou??

From USAToday: "Sophomore transfer C.J. Giles was held out of the Pac-10 opener at Arizona after arriving late for two practices earlier in the week. The 6-11 center played two days later at Arizona State and scored just two points before fouling out for the fourth time in six games."