Self rooting for the Wildcats tonight

Tonight the Kansas State Wildcats can do the Hawks a huge favor: the 'Cats host Texas on Big Monday. Should Michael Beasley and company knock off the Longhorns, Kansas and Texas would both have three losses in the conference. 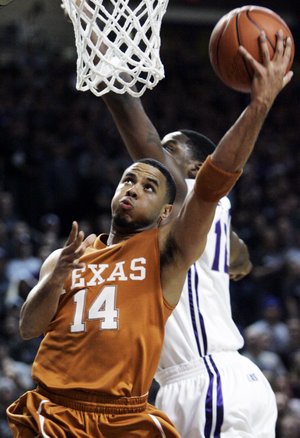 Texas guard D.J. Augustin (14) dips under the rim for a reverse layup while Kansas State forward Bill Walker (12) attempts to block the shot during the first half of the Longhorns' 74-65 victory Monday in Manhattan. 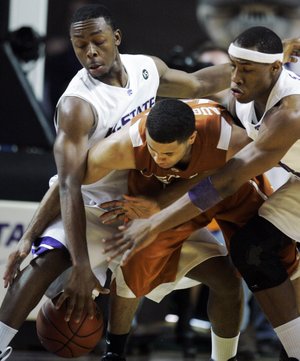 Manhattan, Kan. — A.J. Abrams was nowhere to be found in the first half. He wasn't looking for his shots and was missing the few he took.

One shot changed everything.

Abrams scored all 13 of his points in the second half - sparked by a three-pointer five minutes in - and D.J. Augustin had 24 points, helping No. 5 Texas beat Kansas State, 74-65, on Monday night, the Longhorns' eighth straight victory.

"A.J. really got going," Texas coach Rick Barnes said. "They went to the 3-2 zone, and that's good for A. That was an important stretch."

Abrams struggled his previous two games, scoring a total of 14 points, including a season-low five against Oklahoma on Saturday. He wasn't much of a factor in the first half of this one, missing both shots he took.

Abrams finally scored five minutes into the second half, using a baseline screen to get open for a three-pointer in the corner. The shot seemed to boost his sagging confidence, and suddenly Abrams became more aggressive, hitting two more three-pointers in the next two minutes.

He added another three to put the Longhorns up 62-54 with just under five minutes left, and finished 4-of-9 from the field after going 4-for-20 the previous two games combined.

"I just kept shooting," said Abrams, who broke the Texas record for three-pointers with his 249th. "My teammates and coaches told me to keep shooting the ball, so that's what I did."

Texas (24-4, 11-2 Big 12) didn't get much production outside of its two speedy guards, but the Longhorns put the squeeze on Kansas State with their stingy defense and improved to 8-0 in February to match a school record set in 1962-63.

Connor Atchley scored 12 of his 14 points in the second half after struggling with foul trouble for the Longhorns, who have held their last three opponents to a combined 23 percent shooting.

Texas leads the Big 12 by 11â2 games over Kansas and needs one victory in its final three games to match the school record of 25 regular-season wins, set two seasons ago.

"They've been playing better than any team in the country," Kansas State freshman Michael Beasley said. "They're a good team. They defend. They've got a whole army."

Kansas State (18-9, 8-5) got another big night from Beasley - 30 points and 15 rebounds - but had trouble solving Texas' aggressive zone and lost its third straight. The Wildcats shot 32 percent and got almost nothing from second-leading scorer Bill Walker to see their 10-game home winning streak end.

Kansas State's biggest problem was shooting from the perimeter. The Wildcats were 7-of-27 from three-point range, a mark that would have been much lower if freshman Jacob Pullen (19 points) hadn't gone 5-for-9 from behind the arc.

"They're big. They're so darn big," Kansas State coach Frank Martin said. "They're long and they pressure you. They're a good team."

Augustin gave Kansas State all kinds of problems at the other end.

The 6-foot sophomore seemed to get where he wanted whenever he wanted, dribbling around the perimeter, poking and prodding Kansas State's defense to open up three-pointers and drives to the basket.

Augustin had 12 points by halftime and helped Texas to a 57-50 lead midway through the second half, scoring on a floater then a three-point play after snatching the ball from the hands of Kansas State guard Fred Brown. He also had five assists and four steals.

Kansas State missed 12 of its first 16 shots overall and its first eight three-point attempts. Somehow, the Wildcats scratched out a 30-all tie at halftime - thanks to Beasley.

Aggressive from the start, the 6-10 freshman made quick moves instead of waiting for the defense to collapse around him. He had Texas big men Atchley and Gary Johnson in foul trouble in the first 10 minutes, and had his 24th double-double by halftime with 17 points and 10 rebounds.

Beasley finished 10-for-21 from the field Monday, two days after scoring a Big-12 record 44 points in a 92-86 loss to Baylor on Saturday.

"He's got a special game," Barnes said. "He's got great hands, soft hands. I think he's really a better shooter than people think he is, great around the rim."

While Beasley followed one big game with another, Walker didn't.

The freshman forward scored 31 points against Baylor, but was clearly frustrated by the physical play inside, complaining to the officials repeatedly in the second half. He finished with one point, missing all 14 of his field goal attempts.

"Bill played as hard as he could play," Martin said. "Bill defended, he went after balls. Give Texas some credit. They did the same thing to Kevin Love at UCLA, and Kevin Love, last time I checked, is a pretty good player. Texas is good."

UT loses Durant and goes on to become the top club in the Big 12. Sheesh!

Assuming the rest of the season goes as expected and UT takes the conference title, this is a huge disapointment. I know a lot of you couldn't care less about it, and say that it's meaningless when compared to the NCAAs. If that were the case, the banners wouldn't be hanging in AFH. Only one team can win it all each year. If you're not that team, was the season a failure? No, not if you had other successes during the year, including, but not limited to, a conference title. Well, KU, like every other year, is unlikely to win the national title, and now, it appears, is unlikely to win the conference title. Given the talent level, the pieces, and the expectations on this team, and assuming KU does not go on to win it all, this season seems to be filled with underachievement. Was I wrong to have expected more from this team this year? Perhaps.

Right now, the team is not as good as last year, and it reminds me of the last two games in the NCAA tournament last year. It seemed like we ran into mud in those two games, and it seems like that now for this team. The losses are not by very much, and are on the road, but you know you have to be killer because on the horizon is UCLA or Duke or NC or Memphis or Tenn or whoever... and even Texas. The number one ingredient is greasy quick lightning speed. It helps you defend, pass, get where you need to go before someone else, preferably under control... like DJ Augustin. Our guards looked quick in the preseason, but in the Big 12?

KSU's failure to beat Texas should be rewarded appropriately in the Phog. They are reminding me of their football swoon. Perhaps the BBallHawks can remind us of our football rise.

Which means there is still a wonderful orange glow around here.

Going undefeated in February would be a remarkable feat for any team, considering it is the heart of the conference schedule. Texas, however, is doing that this year with a very powerful Big 12. Give credit where credit is due.

I actually agree with some of these posters - Self has not been a great coach, not yet, at least. Although he has had tough shoes to fill and Kansas basketball always brings high expectations, I'm still a very depressed KU fan and, objectively, losing faith in any of Self's "talented" teams. But they won't fire Self. No, no......so, Ted Owens era here we come......

Yes, this is somewhat of a disappointment not winning the regular season crown. But it's far from the end of the world.

But I would bet not one single person here thought KU would win the regular season and tourney titles 2 years ago.

Coach Self was great back then. The team had a lot of fire. None of that exists now, as far as the majority of you think.

People have to take the good with the bad. It's not always going to be perfect.

I'll bet if these boards were around 20 years ago, 99.9% of the fans would have jumped ship along time ago.

Then jumped right back on after the National Championship game.