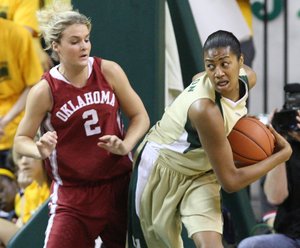 Baylor's Danielle Wilson, right, keeps the ball from Oklahoma's Jenny Vining in the second half of a college basketball game, Sunday in Waco, Texas.

Waco, Texas — Rachel Allison and Angela Tisdale stopped in the middle of the court and leaped together in celebration.

That was less than seven minutes into the game, and the fun was just getting started for eighth-ranked Baylor.

That celebratory gesture came during an early spurt that put the Lady Bears ahead to stay and they went on to a 79-59 victory over No. 10 Oklahoma for their 16th straight victory at home.

Tisdale and Allison were among four players who scored in double figures for the Lady Bears (22-3, 10-2 Big 12), the only Big 12 team without a loss at home.

Stillwater, Okla. - Alison Lacey scored 15 points and Heather Ezell added 12, including the go-ahead free throws with 41.1 seconds left, as Iowa State sustained a second-half rally by No. 15 Oklahoma State and beat the Cowgirls on Sunday.

After trailing by 13 early in the second half, Oklahoma State clamped down on the Cyclones' perimeter shooting to mount a comeback.

The Cowgirls (20-4, 8-3 Big 12) finally pulled ahead with a run of seven straight points that Maria Cordero capped with a fast-break layup to put Oklahoma State ahead 54-52 with 2:08 remaining.

Columbia, Mo. - Ashley Sweat and Kimberly Dietz each scored 15 points and No. 17 Kansas State held its lead in the Big 12 Conference with a win over Missouri on Sunday.

College Station, Texas - Texas A&M's eight turnovers were its fewest of the season. Texas Tech had 24.

That statistic combined with a career-high 29 points from Takia Starks helped No. 20 Texas A&M to victory over Texas Tech on Sunday.