Kansas guard Mario Chalmers (15) gets up to put a hand on a shot by Colorado guard Richard Roby (23) during the first half of the Jayhawks' 69-45 victory. Chalmers led the Jayhawks with 13 points, while Roby - the Buffs' leading scorer on the season - was held to two points Saturday in Allen Fieldhouse. 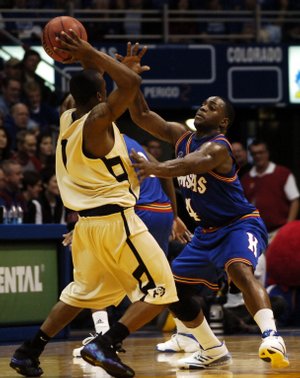 They threw the basketball out of bounds, stepped on the end line and botched alley-oop dunk tries.

"I asked the guys, 'What are you doing? What's wrong? Are you nervous because coach Brown is here?' Every one of them raised their hand," Kansas University basketball coach Bill Self said of his players, who practiced poorly Thursday in front of Hall of Famer Larry Brown, who led the Jayhawks to a national championship 20 years ago.

"Guys were sped up. It meant a lot for all our players to have not only coach back, but everybody else back."

Awed by the presence of Brown and more than 200 other coaches and players in town for KU's 110 Years of Basketball Celebration weekend, the Jayhawks started slowly en route to a 69-45 bashing of Colorado on Saturday at Allen Fieldhouse.

"I think our guys felt some pressure today to try to perform well," said Self, who admitted he also felt a little bit of anxiety trying to win a game five hours before a reunion banquet at Crown Automotive. "I didn't feel extra pressure because those guys were in (town). I was like, 'We need to do this for ourselves. We've got to get playing better (after Monday's loss to Texas).'

"But you certainly don't want to play poorly with all those guys coming back."

KU's effort, which included holding high-scoring Richard Roby to two points off 1-of-11 shooting, certainly impressed former KU coach Brown, who sat a few rows behind KU's bench and applauded for much of the game.

Brown spoke to the Jayhawks after Thursday's workout - and inspired them in the process.

"It was good to hear coach Brown give us support and extra tips," junior guard Mario Chalmers said after hitting three three-pointers in five attempts and scoring 13 points with five assists and two steals. "He said it was a team effort. Everybody has to come together as a team."

The Jayhawks did just that shortly after Levi Knutson's second three cut KU's eight-point lead to 21-16. After Self chewed the squad during an animated timeout, the Jayhawks went on a Sherron Collins-led 9-0 burst to increase a 23-18 advantage to 32-18 with 1:19 left in the half.

Another impressive run - this one 13-0 - gave the Jayhawks an insurmountable 50-24 advantage midway through the second half.

"It wasn't as bad as you might think, because they force ugly games," Self said of the Buffs (10-14 overall, 2-8 Big 12 Conference), who use most of the shot clock on each offensive possession.

"We won't play anyone who will have more slow possessions than what we did today. It was one of those games hard to play. You grind it out and think you're not playing well, then you look up and you are up by 30."

"We did a great job on him. We did a lot of switching, a lot of fade-screen switching, ball-screen switches with him. We just limited his points and had a man on him at all times," said Arthur, who scored eight points and grabbed six boards in 21 minutes.

Arthur prepared by guarding 6-6 Brandon Rush all week at practice.

"Brandon and Roby are kind of similar so we were just going like him, simulating like he was Roby in practice," Arthur said. "It's been tough learning the principles of guarding a perimeter player."

CU, which dropped its 25th straight game at Allen Fieldhouse, hit 35.4 percent of its shots.

"I don't think we gave up one backdoor layup all day and didn't give up any uncontested threes," Self said after the Jayhawks hit eight of 19 threes to CU's five of 16.

The Jayhawks had their moments on offense, including their usual array of alley-oop dunks that gave everybody something to talk about at Saturday's banquet.

"This is pretty cool for everybody, really cool," said Self, whose Jayhawks are idle until Saturday, when they meet Oklahoma State in a 3 p.m. tipoff in Stillwater, Okla.

hats off for shutting down Roby and of course, the win, albeit poor FG made. i did see at least 3 alley-oops during ESPN highlight. we hope to see more of oops in next games please.

jaybate, what's your problem with rebounding? We out rebounded them 38-24. Who cares who got the rebounds. The bigs were busy keeping them away from the basket so all the shots had to come from outside--so all the rebounds were long. Did you want the bigs to leave the basket and run out to catch those long ones? Then you could have criticized them for leaving the basket open. Lighten up.

jaybate, your insights are usually pretty good, but I have to wonder the same thing.

Colorado definitely did not want to get into a running game with us, so they protected against the fast break by dropping guys rather than crashing the boards. This created an easier situation for our guards to rebound. Rebounding is a team effort. Our bigs did a nice job of blocking out and the ball went to the guards in many instances. Only 5 offensive rebounds for Colorado - a major positive.

jaybate's laughing at everyone right now. He wasn't angry with KU's rebounding stats, he was excited that KU is rebounding from another disappointing loss!! ;p

Seriously, we expected the Jayhawks to beat Colorado, and rather decisively. I wasn't a bit worried about Colorado. It's K-State and Texas A&M that worry me. I agree with those who are concerned with how we lost to K-State and Texas - even though admittedly those were tough road games - the Jayhawks played very uninspired in those games and could have won had they played even a little bit better (they lost to Texas by just three points - three little points!!) If they lose to K-State in Allen Fieldhouse, it will be horrible. I love the Jayhawks...I know they are CAPABLE of beating K-State at home...I just hope they actually do.