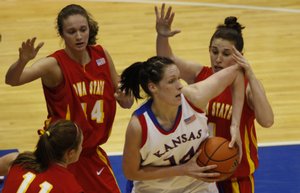 In its place? Boogaard Ball.

That's right. The Jayhawks found that freshman forward Krysten Boogaard should always be on their minds while on the court, and that certainly was the case Saturday.

Boogaard got plenty of touches and notched 20 points, 12 rebounds and three blocked shots, helping Kansas to a much-needed 53-50 victory over Iowa State at Allen Fieldhouse.

"I'd throw it to her every time," KU coach Bonnie Henrickson said of Boogaard.

And if Bonnie ain't happy, ain't nobody happy. So the last few days at practice were spent working the ball inside to the 6-foot-5 Boogaard. Religiously.

If a guard forgot that this is now Boogaard Ball, she was told to leave the court.

"We had four kids on the floor one time," Henrickson said, "because I kicked everybody off."

Obviously, the message reached KU's guards eventually. Boogaard had 11 of the Jayhawks' first 13 points, and it turned out that all 20 of her points were needed in the low-scoring defensive battle.

"It was to the point where sometimes you forget that you're wide-open because you're trying to get the ball to her inside," sophomore Danielle McCray said. "Your man's off of you, and you don't even look to shoot it."

No need. KU's three-point shooters were ice cold, going 1-of-11 from beyond the arc.

After the hot start, ISU started double-teaming Boogaard, temporarily derailing her offensive production. But the Canadian came through big in the end, finishing a guarded point-blank shot with 24 seconds left to give Kansas the three-point lead that held up.

She was one of many clutch performers in the final minutes for KU, now 13-8 overall and 2-6 in the Big 12 Conference.

The most unexpected was Sade Morris, who scored nine points and added six rebounds despite battling the flu. Morris actually left the game early in the second half to get "her head in the can," according to Henrickson.

Saturday's victory snapped a three-game losing streak and gives KU a little bounce heading into the second half of Big 12 play. They don't play again until Saturday at Kansas State and will get a day off today to relax and reflect on just how important the victory was.

And make no mistake, it was important.

Great job Jayhawks! On a night when shots from the outside weren't falling, you stayed in the game with good defense and got it done around the hoop. Ignore the naysayers and use this win to build some momentum!

Glad to see that Coac Bonnie finally realized that this team needs a go to player and that this team can not shoot a lick 9see season average from anywhere including free throw line).

Since you can not teach pure shooting, you wonder why it took Coach Bonnie so long to figure this out. Almost 20 games to determine that no one can score! If they were intra-squad scrimmages maybe but not in competition.

I hope the KU WBB can kick it into gear and win a few more this season $50K a in in coach's salary is mighty tall cotton if you can pick it!