It turned out to be a beautiful day for a road trip, as Mark Mangino and company head for Arizona. 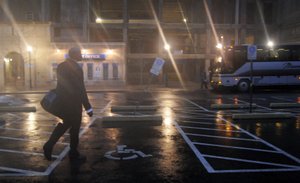 Tempe, Ariz. — Kansas University’s football team was greeted by a mariachi band and the yellow-jacketed Insight Bowl committee members when the Jayhawks arrived Friday morning at the site of the New Year’s Eve Insight Bowl.

Kansas held its first practice in the Phoenix area shortly after arrival and will practice every day until the game.

KU, making its second bowl appearance in two years for the first time in school history, will face Minnesota in the Insight Bowl, which will kick off at 5 p.m. Central time on Dec. 31.

Kansas’ players were allowed to go home for winter break Dec. 23-25 and made their way independently to Tempe on Friday, though 27 were on the team plane, which chartered out of Topeka Friday morning.

KU will practice each of the next three mornings at a local high school, then hold a walk-through at Sun Devil Stadium on Dec. 30.

The game will be televised on the NFL Network, as well as on WDAF in Kansas City. The NFL Network is available on Sunflower Broadband channels 154 and 230.

i think its cool they get to take their families. thats class.