Kansas freshman Emily Cressy (21) gets ready to unload on a cross during the Jayhawks' 3-0 victory over Purdue. Kansas opened the season with the victory over the 24th-ranked Boilermakers on Friday at Jayhawk Soccer Complex.

On Friday, the KU soccer team played the first real game of the season for any KU sport. 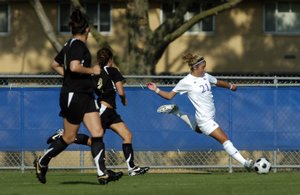 Kansas freshman Emily Cressy (21) gets ready to unload on a cross during the Jayhawks' 3-0 victory over Purdue. Kansas opened the season with the victory over the 24th-ranked Boilermakers on Friday at Jayhawk Soccer Complex.

Rather than pacing the sidelines Friday afternoon, Mark Francis could be spotted perched above Jayhawk Soccer Complex, catching the Kansas University women's soccer season opener from a camera tower just outside the pitch.

No, the Jayhawks' 10th-year coach isn't considering a career change to the video-production industry. Instead, Francis was serving a one-game suspension he received for a red card during KU's final game of last season.

The view might not have been ideal. But the result he witnessed was picture-perfect.

Kansas shut out No. 24 Purdue University, 3-0, as the Jayhawks netted a trio of goals during a 28-minute span in the second half.

Kansas - which shut out Drake University by the same score in an exhibition last week - is beginning to make this goal-scoring thing look kind of easy.

"Even after we scored one, two and three, we still kept going at them," Francis said. "That's something our team needs to do. When a team goes down, we can't let our foot off the gas."

Purdue actually appeared to be weathering the 93-degree August heat much better than KU in the first 45 minutes. The Boilermakers nearly scored on multiple occasions in the final 10 minutes, and the Jayhawks seemed dead on their feet. But Purdue was unable to capitalize, and both teams went into the break tied at no goals apiece.

"I'm sitting up there watching this, and I just kept saying we needed to get to halftime," Francis said. "Fortunately, we did get to that point, and the second half was a different story."

The Jayhawks broke through in the 54th minute. Freshman Kortney Clifton lofted a cross into the penalty box that landed onto the waiting foot of senior Missy Geha, who slid with the ball into the net far-post.

Freshman Emily Cressy, who is developing into the Jayhawks' top scoring threat, netted KU's second goal 12 minutes later on the wildest play of the day.

Kansas goalkeeper Julie Hanley punted a ball beyond midfield that bounded high off the turf - over the entire Purdue defense - and right at Cressy, who didn't hesitate. She settled the ball and placed it in the lower-right corner for a 2-0 lead.

"Before the game, Julie and I had a talk," Cressy said. "She would kick it over, and I would just shoot it. So, I was really thinking about it the whole entire game, waiting for it at the right time, and it just came."

Cressy also helped on the Jayhawks' final goal in the 82nd minute on a similar play. She collected a bouncing ball from Hanley and beautifully flicked on to forward Kim Boyer, who buried a ball on the right side of the goal.

The contest turned into such a thorough beating, it prompted the "Rock Chalk" chant from fans in the final seconds.

After waiting more than nine months to serve his suspension, Francis now happily can wait another nine days to return to the sidelines. That's when Kansas plays its next game, Aug. 31 at home against Auburn.

Great start to the season ladies! Keep it up!GO JAYHAWKS!