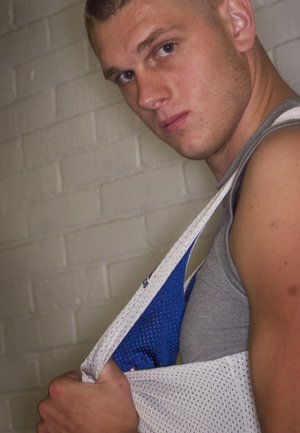 KU sophomore Cole Aldrich, one returner from last season's team, will be headed to Canada for exhibition games on Aug. 30 and 31.

All work and no play makes for a brutally dull summer vacation.

So Kansas University sophomore center Cole Aldrich, who served as a counselor with other college standouts at the Adidas Nations camp in Dallas and spent countless hours in the gym and weight room, also fit in some down time during June and July.

"I went out on the lake, went swimming once or twice. I kind of shot the breeze one or two days," Aldrich, KU's 6-foot-11, 240-pounder from Bloomington, Minn., said Friday afternoon at Allen Fieldhouse, before one of the Jayhawks' practices leading up to their Labor Day weekend trip to Canada. "I was spotted at Clinton Lake once or twice this summer."

He wasn't doing anything crazy like risking the waves water skiing.

"I used to do that when I was a kid. Now it's just basketball," Aldrich said of how he gets his thrills.

Aldrich - one of the heroes of KU's NCAA Final Four semifinal victory over North Carolina - said his national-championship offseason started slowly before he picked up the pace the past month or so.

"It was tough going through a seven-month season," Aldrich said of his freshman campaign. "I just wanted to sit on the couch a little bit. Toward the end of the summer, it was really productive.

"I went to Adidas Nations. It was really fun. We had some great workouts there," he added of pick-up games involving UCLA's Darren Collison and Jrue Holiday, Baylor's Curtis Jerrells and Kevin Rogers, Memphis' Antonio Anderson, Duke's Nolan Smith, Louisville's Terrence Williams, Pitt's Tyrel Biggs and Dejuan Blair and others.

"I worked out with one of my friends toward the end of the summer and really started to get into the groove of playing basketball."

Aldrich reported to KU in great shape. He has been singled out as an early bright spot by coach Bill Self.

"He's doing great," said Self, who has put his team through three practices with more on the tap this weekend and through next week. "Cole now would lead our team hands-down."

"Kleinmann and myself told Quintrell (Thomas, 6-7 forward) and the twins (Marcus Morris, 6-8, and Markieff Morris, 6-10) the different things we do in practice to give them a little edge," Aldrich said. "We showed them the post moves we work on at practice, a lot of footwork stuff. The main thing is footwork and angles at our level."

The twins have yet to appear at pre-Canada practices as they await clearance by the NCAA. That leaves KU with a shortage of big bodies, quite a different situation from a year ago when big men were prowling everywhere.

"Yes, definitely," Aldrich said, asked if he misses Darrell Arthur, Darnell Jackson and Sasha Kaun, who sometimes made life miserable on him at practice.

"Last year, I was the fourth big guy in the rotation behind the other guys. When I got on the court, I couldn't believe how fast everything was. Toward the end of the season, things started slowing down. With the help of Darnell and the other big guys, I learned a lot.

"They know so much about the game. I talk to them every once in a while to see how everything is going. It's exciting to know last year I played against three guys that are in the NBA. If Sasha wasn't in Russia (to play pro ball) he'd be in the NBA."

Aldrich said he'll do everything possible to step up his game in the absence of his big-men buddies.

"Basically, it's night and day," he said of his role this year compared to last year. "I'm one of our main guys on our team now. It's real exciting to go through the transition, progressing over the course of freshman year to sophomore year to junior year. Different expectations come with that."

"I was doing the same things I was doing every other game, just on a bigger stage," said Aldrich, who averaged 2.8 points and 3.0 boards a game for the national champs.

He recalls what UNC coach Roy Williams said to him after the game that preceded the Jayhawks' 75-68 (OT) national title win over Memphis.

"He said, 'Great job, go win it for us.' Roy knows what Kansas tradition is. He coached here for numerous years," Aldrich said, emphasizing the word "numerous."

Aldrich also understands KU tradition and embraces Self's comment that he could be one of the best big men to play at KU in many years.

"In high school I was viewed as one of the better guys on the team. One of the things I need to do is lead by example. Leading by playing is even better," Aldrich said.

Self said he hopes the Morris twins are declared eligible by the NCAA Clearinghouse on Monday. They cannot practice until they are cleared by the Indianapolis organization.

"We have not heard one thing," Self said Friday. "I was hopeful it'd happen three days ago. Unfortunately for us, it is status quo until the first of next week."

Of the delay, Self said: "We are not a fall sport. They are busy getting all fall sports people taken care of. I don't anticipate a problem."

All of last years bigs said that Cole will be a great player for Kansas. I look forward to watching him play this year. It was awesome watching Cole shut down the NCAA MVP in the final four. Hansbourgh looked totally lost out there on the court that night. Your a champion Cole, Rock Chalk Jayhawk!

This story on Cole is a breath of fresh air given the recent hiccups with Sherron and Markieff. It sounds like Cole's summer has been a total 180 of Sherron's in terms of conditioning and the move toward leadership. Hopefully Cole will have a positive influence on the twins and Quintrell and motivate them to start realizing their potential. A lot of the time I think a peer can have an even bigger impact than that of the coach, at least initially. There's nothing better than having a team leader that the other players feel like they have to be accountable to. Nice job Cole! I can't wait to see this kid dominate the paint this season!As for Sherron, I hope he takes a page out of Cole's book and starts putting in the sweat equity now.

I love it. My favorite quote? A modest reference to the steady dose of pimp slaps he administered to "Psycho" T."I was doing the same things I was doing every other game, just on a bigger stage,"The guy loves the big stage. You could sense this even before his first game. His interviews were great. He just doesn't get nervous. He's a gamer.

jhawkfan - The clearinghouse has to look at every transcript and class. If there is a question then they need to contact the school and get info. Sometimes they need to have tests that were taken sent. The prep schools and High schools are busy now and may have not sent the info. Then when they get it they need to review it.Plus they need to finish football players first and each team is the equivalent of 7 or 8 basketball teams.

Uh, dagger, you might want to recheck your math.

More than 30 minutes and a double-double per game tis year. It's a good thing Cole's shoulders are broad. Sherron's will be plenty capable in time for the Madness. As a new dad, I'm glad to hear he go lots of quality time with his child. In the meantime, it is just that much more practice time for the young guys. Sherron will be more than ready to lead the team by mid-October, if not boot camp.25+ players per team * 100+ D1 teams > 25,000 players to clear for D1 FB, not to mention all the other fall sports. The twins are a special case only for KU.And to the LJW staff, are there articles like this about FB in the works, or are trees the only thing to write about on the other side of the hill.Rock Chalk

I really like what I see and hear out of Cole. I don't know how vocal he is, but a very big guy who leads quietly by example can have a big impact.And we shouldn't underestimate the experience Matt Kleinmann brings to the table. He's going to be an important guy in the locker room this season. He'll have a bigger effect on this team than maybe even he realizes at this point having been in the system for a few years now.

Wonderful comments by Cole. I hope he has a better season than Kevin Love did last year. And who really, really knows about Kleinmann--he has only run in the offense for 3 years, but rarely got game minutes because of who was in front of him in the rotation. I will simply state: I am curious what he is capable of as a 6-10 or 6-11 bigman? Sherron will be fine, too. Make no mistake, this will be a tough, athletic, and deep team again, with different players having different levels of experience. Really curious what we will look like in January 09...