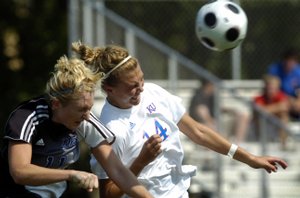 Emily Cressy didn't record a shot last season for Kansas University's soccer team. In fact, she never even saw the field, choosing instead to sit out and take a red-shirt year.

If she continues to perform the way she did Saturday afternoon, there won't be any reason for her to come off the field again.

Cressy scored two goals - one on her first shot of the game - in leading Kansas to a 3-0 exhibition victory against Drake University at the Jayhawk Soccer Complex.

The Ventura, Calif., native, who was a two-time all-league selection in high school, saved a year of eligibility by not playing last season, and it appears to have paid off with a starting nod on this year's KU team.

"Emily's a goal-scorer," KU coach Mark Francis said. "That's what she does. In this game, you've got to have somebody that can stick the ball in the back of the net, otherwise you don't win. Emily's very good at doing that. That's why we recruited her."

Cressy got the scoring started in the 11th minute when she took a pass from midfielder Monica Dolinsky to the top of the penalty box. Cressy then chipped a shot over Bulldogs goalkeeper Jenny Schroeder to give KU a 1-0 lead. It was her first game-day shot in a Jayhawks uniform.

"I thought it was going to go out," Cressy said. "I wasn't really expecting it, but it felt good to score and win."

The only low point for the Jayhawks came in the 51st minute when defender Jenny Murtaugh took a high kick to the head. Murtaugh had to be helped off the field, a towel draped around her face.

But six seconds later, Cressy struck again to seal the game against a Drake team that left significant gaps in its defense throughout the afternoon. This time, Cressy headed a shot into the top of the net for her second goal.

Senior midfielder Jessica Bush closed out the goal-scoring in the 75th minute with a nifty crossover in the penalty area. Beating two defenders, she bent the ball beautifully into the left side of the net for the Jayhawks' final goal.

Drake's lone scoring threat came in the 64th minute, but forward Crystal Townley's shot smacked the left post, and the ball darted away.

The three goals were a welcome sign for a Kansas team that managed only 23 goals in 21 games last season. KU scored three or more goals just twice all of last year.

Francis was able to put all his players in the exhibition and noted that depth on this year's squad would be a huge advantage over past teams.

"The good news is we have a lot of headaches as far as team selection," Francis said of figuring out the starting lineup. "As a coach, it's a much better problem than not having a headache of who we're going to put here because nobody is stepping up."

The Jayhawks will face a significantly more stern test in the official season opener Friday against Purdue. The Boilermakers are ranked No. 24 in the nation in the National Soccer Coaches Association of America poll and made the NCAA Tournament last season.

"Today, I think we showed a glimpse of what we can do," Bush said. "This is just a fresh start. Friday's going to be a great game for us."

Good to hear the ladies started on the right foot. Congrats! How bout some video of the game? Looking forward to seeing Cressy punch the onion bag more often.