Kansas University junior Darrell Stuckey has his number 25 etched into his hair. Stuckey, known mostly for his happy-go-lucky demeanor, also knows when to exert toughness when he steps on the football field at safety.

Kansas University junior Darrell Stuckey has his number 25 etched into his hair. Stuckey, known mostly for his happy-go-lucky demeanor, also knows when to exert toughness when he steps on the football field at safety. 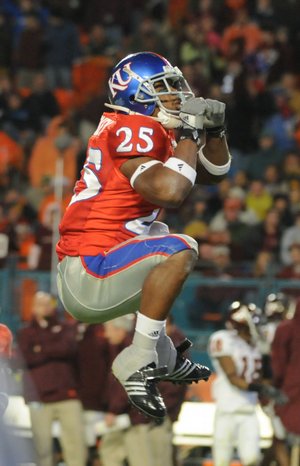 KU safety Darrell Stuckey leaps in this Jan. 3 file photo as he celebrates the Jayhawks' blocked field goal in the Orange Bowl against Virginia Tech at Dolphin Stadium. Stuckey is expected to lead an experienced KU secondary this season. 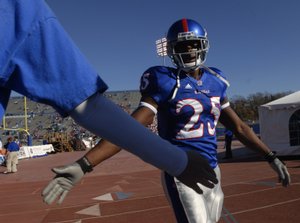 Where Darrell Stuckey comes from, football is less of a way of life and more of a way to live.

A 2005 graduate of Washington High in Kansas City, Kan., Stuckey's younger days as a three-sport standout with the Wildcats were spent surrounded by crime, violence and, perhaps worst of all, a lethargic attitude about the world around.

Through his ever-sunny demeanor and genuine zest for life, Stuckey always did his part to change that. Now, as the Kansas University junior safety prepares for the latest challenge in a life spent thirsting for them, Stuckey continues to keep one eye focused on where he came from with hopes of making it a better place for those who live there now.

"It's one of those things where it's a hard place to really recruit because a lot of the kids don't see college in their view," Stuckey said of his hometown. "A lot of the kids don't have the perseverance or the motivation to get to college because most of them live in broken homes. They have to find that source of motivation, so I try to go back any time I can and try to speak to the students.

Stuckey's words and warm smile did wonders at Washington High last year, when an early-season visit with the football team helped turn the program around.

With a handful of Wildcats huddled around him, Stuckey asked the leaders of the team to raise their hands. Only a few did. That's when Stuckey stood up and delivered the meat of his message.

"He tried to stress that every one of those players was a leader in some way," Washington High athletic director Nancy Browne said. "And he talked about how every player on the team was important. From that point on, the team took on a real positive attitude. They held their heads high when they were successful and were still able to hold them high even when they were not. The message that Darrell brought that day should go to every high school athlete no matter where they live."

Browne, who is entering her 29th year at the school, was there that Monday afternoon when Stuckey spoke to the football team. What she saw on the faces of the student-athletes he spoke to was something she will never forget.

"I think there are a lot of kids here who really need to hear success stories from someone who came from their school," Browne said. "And Darrell is definitely that. The kids were mesmerized by what Darrell said. I could just see it in their eyes."

What makes the story more amazing is that the visit came before Stuckey helped lead the Jayhawks to a 12-1 season and an Orange Bowl championship.

In January, when Stuckey returned to his old stomping grounds to take in a Wildcats' basketball game, it was as if a celebrity hit the building.

"Of course, when he came in last year, none of us knew how good KU was going to be," Browne said. "But when he came back for that basketball game in January, people were all over him."

That wasn't the first time such a fuss was made. Browne said Stuckey always was one of the more beloved students at Washington High, and added that he remains so today.

"Everyone knows Darrell or knows his face or knows who he is," she said. "And everyone just really loves him. He's just a great all-around person."

KU defensive coordinator Clint Bowen remembers when he first learned that to be true. Years ago, while recruiting Stuckey, Bowen said every time he went to Washington High he was bombarded by inquiries and insight about Stuckey.

"When we recruited Darrell, when we went into the school, every single stranger came up to us and said, 'Oh, you're here to see Darrell Stuckey, he's my favorite,'" Bowen said. "You started to think, 'Holy cow, this kid's paying people off.' He has a great outlook on life, always has energy, always has a smile and is really a great kid."

It's those traits - along with his natural athletic abilities - that have allowed Stuckey to excel in the KU secondary. In this year's media guide, players were asked to rank teammates in five different areas. Stuckey's name cracked the top five in three of the five questions, including a first-place nod for "Who is the nicest guy on the team?"

"Just because he has that personality," senior wideout Dexton Fields said. "You never really see him get mad, he's always happy-go-lucky."

That's not to say Stuckey can't get tough when pressed.

Fields compared the junior safety to NFL standout Ed Reed, "a guy that can hit you and will hit you, but can cover, too," Fields said. "A lot of safeties can only do one or the other."

Bowen said the environment Stuckey grew up in provided him with an edge that he can crank up whenever he steps onto the field.

"He grew up in an area where sometimes he knows you have to mix it up a bit no matter how nice you are, and he's capable of doing that," Bowen said. "He's never going to be rude or disrespectful to people off the field, but on the field he understands it's a game and sometimes a part of the game is to be physical and he's going to do his part."

Still, Stuckey prefers to play with a smile. That ever-positive attitude was put to the test during 2006 when, as a red-shirt freshman, he missed the first five games of the season because of injury. He never wavered. He worked harder than ever, smiled as often as possible and found himself starting the final four games of the season.

"It was heart-breaking when I got injured two years ago," Stuckey said. "But mentally I got a lot stronger and smarter and I learned to take less steps and get somewhere a lot faster."

The injury hampered Stuckey's body more than his mind, as his speed slowed, his strength weakened and his legs grew heavy. That, he said, was the hardest part of being injured. But even when talking about the setback, Stuckey couldn't help but crack a smile.

"Before I got hurt, I ran pretty fast, I don't know, a 4.4 in the 40 or something like that," he said. "After the injury I ran a 4.6, which is demoralizing. This year, to finally get back down to the same speed, it helps a lot mentally. I feel like now I'm finally 100 percent."

That spells good things for the KU defense. Last year, despite not being fully recovered, Stuckey started all 13 games and was fourth on the team in tackles with 72. He added two tackles for losses, two interceptions and two fumble recoveries, making him one of the anchors of the Jayhawks' defense.

That experience, along with his natural, take-charge mentality, has Stuckey more prepared than ever for his role as one of the team leaders in 2008.

"(Former KU cornerback) Aqib (Talib) brought a lot of things to the table in terms of leadership, but even last year, Darrell was the leader of our secondary," Bowen said. "This is not a new role for him. A year ago, he had that role already and it's one that he takes pride in. He takes pride in making sure everyone on that field is going forward and working hard and doing what they need to do."

Great article. We all root for all of our J'hawks who make it happen in their lives. I have a question about the nice guy bit: he has quite a mean streak on the field. I have never met a nice Strong Safety and, if I remember right, it was Stuckey who beheaded a couple of running backs as they ran down the sideline last year.My advice: don't get in his way this fall.

Stuckey is a stud. He will be an NFL player as well. The kids flat out loves to play and hit. Its nice to know we have leaders like him and Mortensen on that side of the ball.

This guy is exactly the kind of role model the NFL could desperately use right now. It's time that professional athletics returned to the days when players were able to separate the game from daily life. Competitive on the field with the best of intentions for everybody off the field.I for one could care less what TO is saying from week to week. Tell me about somebody worth talking about.

Stuckey is one of my favorite Hawks. Heard he is an incredible guy on and off the field. This article backs that up. Heard David Lawrence tell a story on Rock Chalk Sports Talk that after KU beat K-State in Manhattan guys were celebrating on the field. Lawrence ran up to congratulate Stuckey and Stuckey told him, "Oh, I have got those bibles for your youth group in my car..." something like that. Here they are celebrating a big win and Stuckey sees Lawrence and starts thinking about a Youth Group they are both involved in. Heard some other cool stories about Stuckey too. I think he could be a NFL guy if he keeps studying the game and working hard. He's a player.

I want to know who is Darrell's barber. I like that cut!

He also attended just about every Ku womens basketball game. Just loves KU athletics. I'd take 10 more of him to field our entire defense.

KU D should be very good this year. Stay humble guys and keep sawing the wood.

I agree with prairie_dog, excellent piece Matt. I enjoy hearing and reading about good role models on our teams.

Nice to see another solid football article not written by a missery grad.