Preseason workouts are underway for the Kansas football team, and while the Jayhawks are playing in 100 degree heat, they are able to relax afterward in their new practice facility. 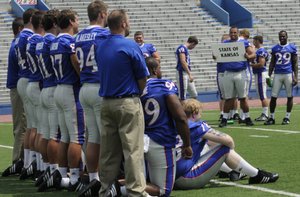 Which home KU football game are you most looking forward to?

Not one to reveal the inner-workings of his program readily, the normally reserved Mangino had no problem responding candidly to a question about who was in line to take over punt-return duties for the Jayhawks.

"It's down to me and (offensive coordinator) Ed Warinner," he offered. "I've got better hands, but Ed runs better."

The reigning national coach of the year was being facetious - although, even if Mangino did line up as the team's primary punt returner, it's hard to imagine things going much worse than they did a year ago.

While special teams generally have been a high point for the Jayhawks in recent years, the punt-return situation last season devolved quickly after Raimond Pendleton's 77-yard touchdown return in the team's season opener.

During the final 11 games of the season, the team's punt returners only managed to return a punt more than 10 yards twice, averaging just 1.7 yards per return in that period.

Three of the leading candidates to take over the position - behind Mangino and Warinner, of course - appear to be red-shirt freshman Isiah Barfield, true freshman Daymond Patterson and senior Dexton Fields.

Barfield, who also should battle for time at cornerback, is listed as the team's No. 1 punt-return man, although the wild card of the group is Patterson, who as a senior in high school was a standout punt and kick returner while earning first-team all-Texas honors as a receiver at North Mesquite High.

"I'll let the coaches figure that out," said Patterson, of whether he'll see immediate playing time as a true freshman. "But I'll be ready for whatever they have in store for me."

While the struggles last season didn't seem to affect the team's play greatly, something surely has to be altered following last season's woes, and Mangino admitted as much.

"Our special teams have been very good here, and last year, returning punts, we did not do a good job," he said. "Not necessarily just at returner. I thought our corners didn't do a very good job of keeping the gunners off of the return man. So we're working the heck out of it. We're really focused on that."

¢ Offensive lineman Hatch impressing: While much of the hype surrounding the Jayhawks' new offensive linemen has been heaped upon red-shirt freshman Jeff Spikes, another youngster recently has caught Mangino's eye.

"He's going to find a spot to play," Mangino said. "He's an intense, tough guy. Really, one of the hardest-working lineman we have in the program. ... He's not a 6-5, long-armed guy. But he's so quick with his feet that he makes up for it. So he's gonna show up at one of those spots."

The multi-talented Meier, already listed on the team's depth chart at both the quarterback and wide receiver positions, potentially could be in line to handle the team's punting duties this season, as well.

While he stressed the Jayhawks would prefer punting duties to be handled by Alonso Rojas, a transfer from Bowling Green currently listed on the depth chart as the team's No. 1 punter, Mangino didn't hesitate to say that, ultimately, the job would go to the top performer.

"We prefer if Kerry wasn't the punter," Mangino said. "But if he's the best punter, he'll be out there."

¢ Kicker competition currently three-deep: The race to replace graduated kicker Scott Webb is in a dead heat, according to special-teams coordinator Louie Matsakis, who said Stephen Hoge, Grady Fowler and Jacob Branstetter each have a chance to earn the spot.

In the four practices since Friday, each of the three has performed nearly identically - none had missed an extra-point attempt and each had missed just one field-goal attempt - and coaches insisted that each had his own strengths.

Mangino said Tuesday that Mortensen is competing at full-speed and hasn't been hampered by the surgery.

I don't think the youtube thing was the reason Pendleton struggled. I think he just played over his head the first game or two. I just don't think he's the answer at punt returner.

Sharp returning punts is a great idea ... there must be some reason it hasn't been mentioned.I'm wondering if this whole punter thing is some weird "smoke and mirrors" ploy.

We need someone punt returning like Jake Sharp or Crawford. Go the K-State route (Sproles). Small and quick.

Last year, Pendleton was clearly our best option at punt returner, but I think his confidence was shaken after the YouTube incident. It all kind of went downhill after that. Hopefully one of these guys emerges and can be consistent, while still being a big play threat back there. After all, if we are going to have a shot at winning tough games against strong opponents, we need special teams to be game changing, not just a gatekeeper.

All of these punter comments sound like he's trying to light a fire under Rojas rear.

Our punt returning can go only one direction. Hopefully it goes a long way that direction. It's good to hear we have another young offensive lineman who is impressing the coaching staff. Time will tell but maybe there won't be much of a drop off, if a drop off at all, from the level of play from last years offensive line.

No question Sharpe could return punts, but I hate to risk him taking big shots as a punt returner. He's too valuable at RB.

Correct me if I'm wrong, but didn't Rojas have pretty rave reviews from some punting deal in Vegas right before he signed?I thought he was by far and away the #1 punter...guess not

All we need to do on special teams is get this offense the ball, we dont need any fancy returners. We need a guy with good hands that wont be afraid to catch the football. A Johnathan Lamb is what we need. Besides, like Mangino said, our returners didnt ever have room to run last year anyway.

This was a really cool article to read. I think that Daymond Patterson should return punts for us. He may be just a freshman but if he has the stuff and I think he does then I think there isnt a better guy for the job. I also love hearing about young lineman who are impressing the coaches. bmcmich1 I think your right Rojas came in hear really highly touted with great expectations and DarthJayhawk I also think your right with your comment with firing up Rojas. I also think its really cool to hear that we have three kickers who each only missed one FG and no PAT's. I'm curious and wish they had gone into what each of their strengths were and wonder about wether we will used two kickers maybe even three one for kickoffs one for accuracy inside the 40 and another with a leg to go from distance. IDK but this article was good a lot of good news and a lot to think about so I liked it.

I wonder if Johnny Beck has any eligibilty left to be our place kicker this year?

How about the Ransburg kid as a return man. He was a slithery s.o.b. at Harrisonville. An incredible athlete. And Daymond Patterson is a 5'9" freshman burner. Low slung and hard to see. Like Sproles.I agree with prairie_dog about Sharp. Don't mess with running game.