KU pitcher Shaeffer Hall pumps his fist and celebrates a strikeout to end the seventh inning.

This evening, the Kansas baseball team was awarded Major League treatment. Tonight at Kauffman Stadium, the Jayhawks and Missouri Tigers took the field in this year's first installment of the Border Showdown. 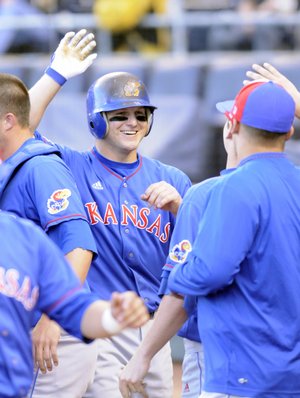 Kansas City, Mo. — Shaeffer Hall froze one last Missouri batter, tightened his arms up and let out a yell. Seven scoreless innings were in the books, and Kansas University's starting pitcher let the last drop of adrenaline come screaming out.

"I got him on a slider," Hall said afterward. "To get out of the inning without any runs, I just got a little pumped up.

"I don't really show my emotions that much, but tonight? I had to."

After such an inspiring effort, nobody can blame him. Hall pitched Kansas to a 3-0 baseball victory over Missouri on Tuesday at Kauffman Stadium, mixing pitches, velocity and location beautifully and baffling the powerful Mizzou lineup all night.

Tuesday's game meant the world to Hall. He grew up in Lee's Summit, Mo., surrounded by the Border War and spent many summer nights watching the Kansas City Royals play at Kauffman Stadium. It was his first time playing here, and he wanted to make it count.

"My nerves were running, and I got that adrenaline rush," Hall said. "It's just awesome."

It certainly helped him through a tight ballgame. Kansas (26-22) scored just one run while Hall was in the game, when Ryne Price hit a towering home run into the right-field bullpen in the second inning.

Meanwhile, Hall settled down and frustrated the Tigers, never allowing a Missouri base-runner past second base. Mizzou's biggest threat came in the seventh, perhaps, when Kurt Calvert singled and stole second with two outs. But Hall struck out Kyle Mach on a 3-2 pitch and let out that scream. A fitting end to his night.

"About the fourth inning, he found his rhythm and located the ball and was able to mix his pitches better, which allowed him to get through seven innings," KU coach Ritch Price said. "If you don't mix against them, you're going to get hurt."

Paul Smyth relieved Hall and closed it out, but not before the Jayhawks tacked on insurance runs. Tony Thompson walked to lead off the eighth inning, and it was followed by a Nick Faunce bunt single. After Robby Price moved the runners to second and third with a sacrifice bunt, John Allman poked a two-strike single up the middle to drive in two.

Tuesday's Border War bash won't count in the Big 12 standings; the teams will play a three-game series that counts starting next week. But the victory stopped KU's four-game losing streak was another memorable matchup with its nemesis and was played in front of a festive crowed of 3,847 filling the lower level from dugout to dugout.

Make no mistake - the Jayhawks needed this one.

"It's a great rivalry," Price said. "KU-MU is a great rivalry in any sport, and I think just the fact that it's in Kauffman Stadium tonight and there was such a great crowd made it a really special night for both teams."

And especially memorable for Hall, who was grinning ear-to-ear after the game. Price was asked if he considered pitching Hall one more frame, and he quickly said no.

"We wanted to Shaeffer to walk off that mound in front of his hometown," Price said, "and feel tremendous about his performance."

A called third strike, a pumped fist and a emotion-drenched scream confirmed it.

"It feels really good," he said, "to be able to come out with a win tonight."

Indeed ...it was a great game and a decent experience.about 3,900 on hand, but a Royals' official said they were only expecting 1,200.Too bad they were selling programs or merchandise, that was a real lost opportunity ...They also were using cameras so the new video board went unused, except for a Jayhawk/Tiger graphic.I sure hope they do this again next year!

They definetly need to promote it more and have the concessions ready. Pony up some money and let fans keep foul balls too.

I don't understand that ...they let you keep foul balls at Hoglund, or at least no one chased me down for it a couple years ago!

I heard an interview with the Mizzery coach who said he wants it to be annual so kids get a shot at playing in a Major League stadium, a great recruiting tool.I just hope it is a better tool for KU

I'm a '91 hawk living outside columbia, and what makes this win over mu so big is that while we were playing in the final four, all the local sports in columbia could talk about is their "highly ranked" baseball team. mu is really full of themselves in baseball, which makes this win even better!Rock Chalk !!!!!!

sevenyear.....I only saw it happen once, but a MU fan said after the game he saw it quite a bit. I think if they knew who caught it they would go after it, but other than that they wouldn't.

i havent heard alot about ku baseball since a couple years ago and how they won the big 12. but it sounds like they are doing pretty good if they beat Mizzery

I think I saw a security person trying to track down a little kid ... maybe they were just checking on them, I'm not sure.***The team won the post season tourney a couple years ago, not much else has gone on, this was a good event for both programs!!

Can't eblieve MU thinks they have a BB team when TT beat them 2 of 3 and almost swept them earlier this month!