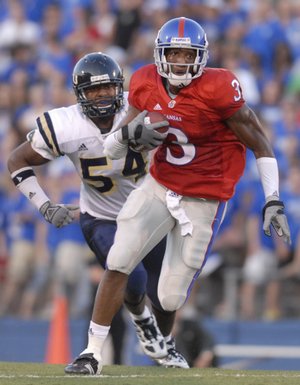 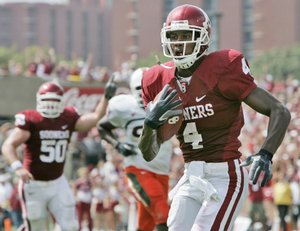 The recent revelation that Aqib Talib tested positive for marijuana three times during his stay in the KU football program has resulted in split opinion on how much, if at all, that will damage Talib's standing in the draft.

Mel Kiper has Talib going to New Orleans with the 10th pick of the first round. The Associated Press has Talib going 20th, to Tampa Bay, and nfldraftcountdown.com has Dallas taking him at No. 22.

It's conceivable the Orange Bowl MVP could slip all the way to the fifth pick of the second round, where the Kansas City Chiefs would be wise to snag the big-play, big-bodied cornerback.

The Chiefs could reach across the border again and select offensive tackle Anthony Collins with the fifth pick of the third round. Jared Allen's departure makes defensive end Chris Long the first-round target. Offensive line and the secondary remain two huge needs for the Chiefs. Talib and Collins would fill both holes nicely and be in line for early playing time under Herman Edwards, even though they both went 0-2 at Arrowhead Stadium for Kansas.

It's been 15 years since the Kansas University football team had a player selected in the first round of the NFL Draft.

Four days from now Aqib Talib, fresh off his pick-six in KU's 24-21 Orange Bowl victory, will most likely end Dana Stubblefield's 15-year reign as the last Jayhawk taken in Round One.

Oh, and positive news for KU fans waiting to see where Talib ends up: The draft, which starts at 2 p.m. Saturday, will go by much faster than previous years.

Teams have 10 minutes this year - as opposed to 15 minutes in the past - to make their first-round selections. After the first round, teams will then have seven minutes for their second-round selections and five minutes in rounds three through seven.

Perhaps this year, you won't have to eat breakfast, run errands, mow the yard and hit the links for 18 holes...all before your favorite team drafts.

It should be a fairly active Saturday for the Big 12 Conference, which has 15 players predicted to go in the first four rounds by ESPN draft analyst Mel Kiper, Jr.

Why teams should care: Sure, the Richardson, Texas, native talks a big game. He also backs it up (11 interceptions the past two seasons with teams often looking the other direction anyway). War room representatives likely will salivate at film of Talib's versatility, which would display the four touchdown passes he caught on offense. The term "big-play ability" gets thrown around loosely, but concrete evidence of Talib fitting the term was present in the 2008 Orange Bowl when Talib jumped a route for an interception and returned the ball 60 yards for the game's opening touchdown.

If Kiper's right: Talib would likely start in nickel and dime packages and have a tough time cracking a starting corner spot with newly-acquired Randall Gay and veteran Mike McKenzie around.

Why teams should care: 19 touchdowns and 1,814 yards in the last two years. Kelly has the size at 6-foot-3 and 227 pounds to be a quality possession receiver.

Key stats: The only question mark is his speed. NFL.com reported Kelly clocked a 4.75 and 4.68-second 40, much slower than expected, at his April 9 "Pro Day" workout in Norman.

If Kiper's right: Kelly would add to a nice receiving corps of Hines Ward (who's 32 years old), Santonio Holmes and Nate Washington.

Why teams should care: Sweed, at 6-4, can win jump balls against opposing cornerbacks more times than not. Combine that with his 4.48-second 40 time, and Sweed could be a scary receiver.

If Kiper's right: Sweed might not replace Laveranues Coles and Jerricho Cotchery his rookie season, but he could make immediate impact as a No. 3 receiver.

If Kiper's right: Nelson could work the slot in his first season behind Lee Evans and Josh Reed. If Nelson makes immediate impact, how much longer will the Bills wait on Reed? In six seasons, Reed has yet to catch more than 58 passes and two touchdowns in a season. And he's only missed eight games in those six seasons.

Why teams should care: Charles' speed is simply unmatched. Charles, a former track star, recently clocked a 4.38-second 40. The team that drafts the UT junior will draft a back who can take it the distance on any given play.

If Kiper's right: This would be a fascinating development if Charles was re-united with Vince Young on the Titans. If Tennessee drafts Charles, he could start his rookie season as a third-down back and spell incumbent LenDale White.

Why teams should care: After Dustin Keller (No. 25 overall on Kiper's mock draft) of Purdue, drafting the best tight end is a tossup. Enter Bennett, a 6-7, 253-pound tight end.

Key stat: Runs a 4.72-second 40. That's in between the times of Oklahoma's Kelly, a wide receiver. Scary.

If Kiper's right: Bennett wouldn't pass Donald Lee (45 catches, 575 yards, six TD's in 2007) on the depth chart overnight, but Green Bay is known for frequently playing two tight ends. Lee played alongside Bubba Franks for a while, and Franks went to the Jets in the offseason.

Why teams should care: For those unfamiliar with Dizon, he registered 463 tackles in his four-year career at CU, good for the eighth best total in NCAA history.

Kiper's mock draft went through round four. The other Big 12 names on it:

We know that Momma's Gotta Eat, but couldn't she have waited for one more year?

I'm with ya, I'm gonna miss his dancing on the sidelines. He kept the whole team pumped. That's a guy that made watching offensive line play fun.Not to worry though, give Spikes 3 months of summer practices and he'll fill the big shoes left behind by Collins. Now, if we could just teach him how to dance and occasionally try to kill one of his teamates.