On the courts this afternoon, the Kansas tennis team was trying to end their regular season schedule with a win over Iowa State. 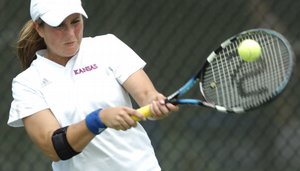 Kansas senior Stephanie Smith competes in a singles match against Iowa State. Smith and the rest of the Jayhawks won, sweeping the Cyclones, 7-0, Sunday at Robinson courts. 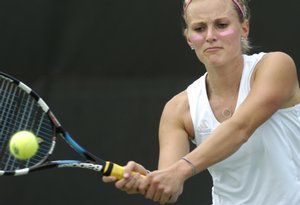 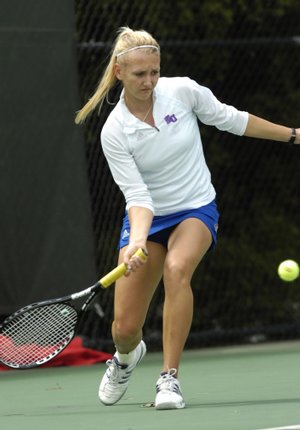 All three seniors - Elizaveta Avdeeva, Lauren Hommell and Stephanie Smith - earned victories in their matches. And so did everyone else, as the Jayhawks' final match of the regular season resulted in a 7-0 sweep of Iowa State at the Robinson courts.

In the process, KU earned the No. 5 seed for next week's Big 12 tournament, where it will face the Cyclones again.

"One thing we've been striving for was definitely improving our Big 12 status, and the girls did it this weekend," KU coach Amy Hall-Holt said of her Jayhawks, who defeated Nebraska on Friday. "This is where we wanted to be, and this is where our goals were. We wanted to be in the top half of the Big 12, and the girls pulled through some obstacles and made it."

For Avdeeva, a model of consistency since she began at KU, the day had even more meaning. She became the all-time career leader in doubles victories in conference history with 23 when she and junior Edina Horvath won their match, 8-4.

"I wasn't nervous," Avdeeva said. "I knew these two matches were important against Nebraska and Iowa State. I came and played as usual and just feel great right now."

"I'm very proud of her and what she has accomplished," Hall-Holt said of Avdeeva, "and she deserves it."

The match against the Cyclones was decided about an hour before it actually ended, and only one match went to three sets. That came at No. 6 singles, where Smith came back to defeat Chrissy Derouin in a 10-point super-tiebreaker.

"It was exciting," Smith said of playing her final home match as a Jayhawk. "I was emotional and got off to a slow start. Luckily, I got things turned around and ended up with a win."

With the victory, the Jayhawks added to one of the most mind-boggling all-time series advantages in the conference.

KU has defeated the Cyclones 29 consecutive times and owns a 32-1 edge overall, with Iowa State's lone victory coming in 1981.

We have a tennis team?

HawkFanEddie, In response to your user name and the question you posted below one of the many articles which clearly confirm that yes, the University does, indeed, have a Tennis team.. I can't help but conclude that your user name, which implies that you're a hawk fan, is nothing more than a feeble attempt at sarcastic wit. It's refreshing to see that your unrelenting efforts prompted you to give that wit another shot by posting a comment. Unfortunately, that attempt proved to be just as stale. HawkFanEddie---I suggest you take up another hobby. Tennis, perhaps.