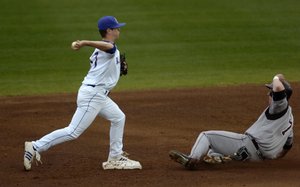 Nick Faunce is a contact hitter, ideally a pest who can drop down a sacrifice bunt and set the table for the big bats.

Eating the feast usually isn't for him.

So imagine how Kansas University's dugout exploded in the eighth inning of Wednesday's baseball game against Missouri State, when Faunce drilled a two-run home run that proved to be the game-winner in a 7-6 victory at Hoglund Ballpark.

With good reason. It was Faunce's first college home run in his 84th career game, and it immediately became one of the most dramatic dingers of the Jayhawks' season.

Faunce, who had 13 career RBIs entering Wednesday's game, showed bunt earlier in the at-bat. But when Missouri State pitcher Pat Doyle grooved a fastball a little up and a little in, Faunce crushed a no-doubter over the 375-foot sign in left-center field.

"I got a pretty good swing on it, and I just jumped at it," Faunce said. "I saw the pitch I wanted."

Faunce drove in pinch-runner Brian Heere ahead of him, giving Kansas its first lead in a wacky mid-week affair.

Missouri State (23-12) jumped to a 5-0 advantage after four innings against KU starting pitcher Shaeffer Hall, but the Jayhawks chipped away at the deficit.

Kansas (24-16) put together a four-run fifth inning by putting five straight base runners on. The biggest dent came with a bases-loaded single by John Allman that plated two.

Kansas tied it up in the sixth on a sacrifice fly by Casey Larson (set up by Faunce's sacrifice bunt). But Missouri State took a 6-5 lead in the seventh on a home run by cleanup hitter Ben Carlson, who drove in three on the night and is hitting .412 this season.

"The one guy you don't want to hurt you," Price said, "and we look like a bunch of idiots pitching to him."

KU's clutch hit was coming to make everything better - and keep the Jayhawks hot heading into a road swing.

Kansas' next eight scheduled games are away from Hoglund Ballpark, starting with a three-game series at Nebraska that gets going Friday.

Wednesday's victory has Kansas feeling good heading into the tough stretch. But the dramatics of it - by an unlikely hero - only make it more delicious.

"I'm thrilled for him," Price said. "The kid works his tail off. : For him to get a clutch hit, hopefully that will get him jump-started."